Before I begin my review, I have to thank the wonderful Rommel of travel blog The Sophomore Slump for recommending this graphic novel to me! 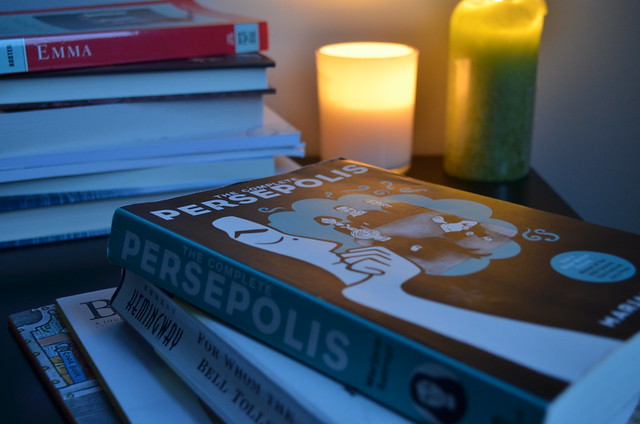 Marjane was born in Iran in 1970, just nine years before the social, economic, and cultural revolution that would shake the Persian nation to its very core. For those (like myself) who are unfamiliar with the details of Iran’s history, Satrapi includes a brief 1.5-page introduction. She explains how, for millennia, the Iranian plateau was fought over, invaded, conquered, ruled over, and invaded again–but Persian culture persisted nonetheless. In 1925, Reza Shah–also known as the “father of the Shah”–introduced a series of reforms to modernize the country; oil was also discovered during his rule. In 1941, during World War II, Reza Shah was forced to abdicate the throne, and his son–simply known as “the Shah”–took his place. A decade later the Iranian oil industry was nationalized; an embargo from Great Britain soon followed, which in turn was followed by a CIA-orchestrated coup to overthrow the Iranian prime minister. The situation grew increasingly tumultuous until, in 1979, the country was overtaken by the Islamic Revolution.

In other words, before Marjane’s story even begins, she demonstrates how the region into which she was born was torn to pieces by pressures both internal and external.

Marjane–or “Marji” as she is often referred to in the book–is 10 years old when Persepolis begins. Like many of her classmates, she resents being forced to wear a veil at school. 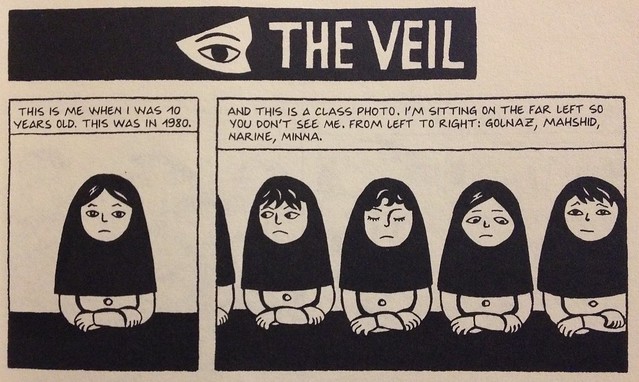 Roughly the first half of the book is told from Marjane’s perspective as a child/adolescent growing up in revolutionary, and later fundamentalist, Iran. Marjane’s memory is remarkable–she is able to recall not just the events of her childhood, but also the emotions associated with those events. It makes for a thorough, yet relatable and easy-to-understand introduction to modern Iranian history. Adult wisdom and a sense of retrospection infuse the narrative, but Marjane’s childlike reactions are preserved, such that you almost feel as though you are experiencing the events for the first time along with Marji. (Which, if you don’t know much about Iran, you kind of are).

As you might have guessed, this graphic novel written by an Iranian expatriate living in Paris is filled with subversion and humor. Marjane was probably outspoken the moment she entered the world. Best of all, her parents are modernists in every sense of the word–they believe in gender equality, human dignity, and education most of all, and they are deeply ashamed when the Islamic fundamentalists seize control of the government in 1979. 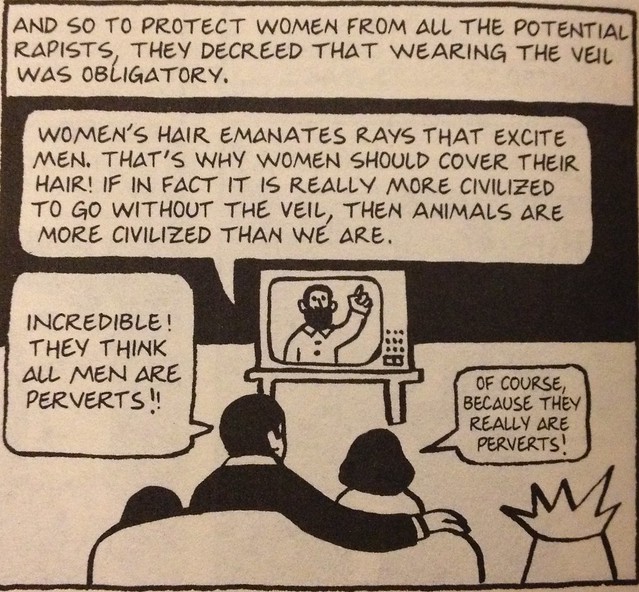 Marjane is just as skeptical as her parents, and her outspokenness eventually gets her expelled from school. The events leading to her expulsion are tame compared to some of Marji’s other antics, however.

She wears all of the banned clothes – symbols of “Western decadence”…

…and isn’t afraid to contradict her teachers.

And then comes my least favorite part of the novel. Iran is deep in the throes of the Iran-Iraq war, bombs rain down on Tehran daily, Marjane has been expelled from school, and has nearly been arrested on several occasions. Her parents ship her off to Vienna to continue her education. At 14, alone and essentially orphaned in a foreign country, Marjane’s feisty side temporarily retreats. Marjane never manages to fit in completely, and this portion of the book was quite difficult to read–I’m pretty sure that these were the unhappiest four years of Satrapi’s life.

She reads a lot, smokes a lot, grows a lot taller, and leads a largely transient lifestyle, moving from one dwelling and set of friends to another. Her confidence shattered, she falls into a dysfunctional relationship that, upon its explosive ending, leaves her depressed and wandering the streets of Vienna for two months in the middle of winter. She somehow scrapes through after a stint in the hospital, returns to Tehran, and begins to slowly put her life back together.

I was almost 3/4 of the way through the novel before I realized what it actually was: a memoir. Usually, I’m not a huge fan of the genre as I feel that most memoirs are emotional and not particularly well told (and typically more interesting to the person writing about his or her life than to anyone else). Persepolis does not feel that way. Essentially a work of non-fiction, as you read Persepolis you’ll fall in love with Marjane as a little girl, ache for her as a lonely teenager unable to return home, and celebrate her restoration as an educated feminist in Tehran. At the same time, you will also mourn for Iran–for the Persian empire that once was, and the war-torn, shattered country that it is today. As Marjane’s mother says, “Our revolution set us back fifty years. It will take generations for all this to evolve” (page 339).

From the very first page, Marjane Satrapi draws you in with her approachable, earnest illustrations and frank dialogue. She doesn’t gloss over the dark periods in her life, and Persopolis is the richer for it. The one drawback of the novel is that Marjane and her parents are well-educated and middle-class, and, as such, their experiences and perceptions of the Iranian Revolution, the Iran-Iraq War, and the Islamic Republic of Iran aren’t necessarily shared by many, if not most, Iranians. As Satrapi’s uncle points out, it’s difficult to carry out a leftist revolution in a country where half of the population is illiterate (page 62). Later, Satrapi’s father remarks that by the late 1980s, some 70% of Iranians live below the poverty line.

After reading Persepolis, two things strike me as especially odd: First, how on earth did religious fundamentalists manage to gain control over a nation that was glorified for its intellectual and artistic achievements? Although Marjane is certainly a modernist, her mother is perhaps even more so–and her grandmother is probably the most radical of all three generations! Second, is it not ironic that in the post-9/11 United States, many of those who were so eager to condemn the Middle East as nothing more than a haven for terrorists hailed from the far-right corners of the Republican party? Many Republicans, as you doubtless know very well, are also very conservative when it comes to religion. It seems that the most like-minded groups in the United States and the Middle East–at least from a traditional, religious perspective–ended up being the ones most eager to wage war with one another.

Persepolis is at once the inspiring, yet occasionally heartbreaking, story of one Iranian girl who maintained her dignity and independence in spite of her circumstances. But it’s also harrowing. Many of the passages could have been lifted from Margaret Atwood’s dystopian novel The Handmaid’s Tale, which was intended to be a disturbing warning about what could happen to the United States if a totalitarian, Christian fundamentalist government took power. First published in 1985–a mere 6 years after the Iranian revolution–I have to wonder if The Handmaid’s Tale was, in part, a response to the events in Iran. Throw Ronald Reagan and the New Right into the mix and the similarities become very disturbing indeed.

I wish I had read this graphic novel in high school. It would have greatly expanded my knowledge of Iran in a much more humanistic way than any dry, informative history textbook ever could have. I might have also saved myself the embarrassment of believing, for a short period of time, that all women who wear veils are oppressed. Though Marjane makes it clear that she resents having to wear the veil, her transgressive attitude toward the theocratic government makes it exceptionally clear that beneath the hood was a liberated woman. It’s an important reminder of something I sometimes forget: that women (and men, for that matter), regardless of how freely they might be dressed, can still be trapped by anti-feminist ideas. And of course, if that’s true, then so is the opposite.

In short, Persepolis is a work of creativity, brutal honesty, shifting perspectives, culture clashes, humor, and unfiltered realism–all set within a period of history that is very often misunderstood. Marjane Satrapi has a singular mind, and by releasing Persepolis, has deigned to share a piece of it with us.

31 thoughts on “The Complete Persepolis by Marjane Satrapi”