The back cover of the book carries endorsements from no less than Madonna and Will Smith, the latter of whom identifies it as “One of my favorite books.” Gee, thanks, Will Smith. I wouldn’t have read it without your blessing. 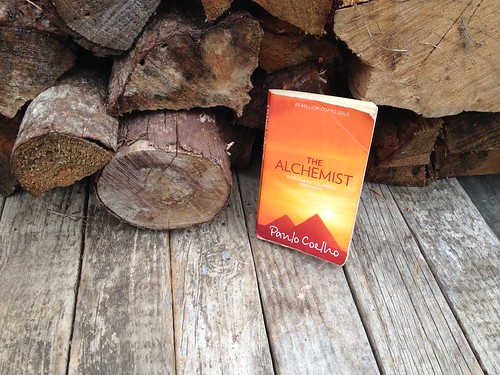 Do you remember the title of J.K. Rowling’s first book as it was published in the U.K., Harry Potter and the Philosopher’s Stone? Do you also remember that magic isn’t real? Ok, good. Just checking. Because the Philosopher’s Stone is a real thing in The Alchemist, as is the ability to transform lead into gold, as is the ability of people to communicate with each other and with the elements through The Universal Language of the World. Oh, I forgot to add that all of the knowledge of the world is inscribed on the Emerald Tablet. Yeah.

I wish I were exaggerating, but this book is nothing but trite aphorisms from beginning to end. The basic premise is that a young boy from Andalusia, Spain isn’t fulfilling his destiny by being a humble shepherd of sheep. Thankfully, a king wearing a gold breastplate intervenes and tells him to believe a recent dream he’s had about finding treasure at the Pyramids in Egypt. Boy decides to sell his sheep and travel to Tangier, where someone steals all his money but then he earns it back because he has a knack for selling crystal! Then he falls instantly in love with a “woman of the desert” after traveling via camel to an oasis in the middle of the desert! Then he meets the famous alchemist who refuses to teach him how to change lead into gold, but it’s ok because he insists that the boy listen to his heart! HE DOES AND THEN HIS HEART LEADS HIM TO THE TREASURE!!! It is written! It is a miracle!

The boy was beginning to understand that intuition is really a sudden immersion of the soul into the universal current of life, where the histories of all people are connected, and we are able to know everything, because it’s all written there. (p. 77)

It’s Slumdog Millionaire all over again! Just as the universe conspired to make Jamal win one million rupees on a game show, so did the universe ensure that the shepherd boy from Andalusia would find a treasure chest filled with gold coins.

We are afraid of losing what we have, whether it’s our life or our possessions and property. But this fear evaporates when we understand that our life stories and the history of the world were written by the same hand. (p. 80)

Everything happens for a reason. We must not question tragedy because it is written into the history of the world. Poor people are poor because it is their destiny. Rich men become rich because they had the wisdom to listen to the omens and claim the treasure that was destined to be theirs. Of COURSE! How could you possibly misinterpret something so simple?

‘I had to test your courage, the stranger said. ‘Courage is the quality most essential to understanding the Language of the World.’ The boy was surprised. The stranger was speaking of things that very few people knew about.’ (p. 117)

This book works for the same reason that horoscopes work, a little something known as the Forer, or, colloquially, the Barnum Effect after the Ringling Bros. circus. Basically, if you make something vague and profound enough, everyone will see themselves reflected in it. Give it a try. Read a horoscope that doesn’t belong to your star sign and see if it still applies to your life (hint: it will!). An article from Psychology Today explains why the Barnum Effect is so seductive:

The second reason people fall for the Barnum effect applies more to predictions about the future, the ones we find in fortune cookies and horoscopes. These provide a comforting, if not always reassuring, sense of control over the unknown. In our constant struggle to see into the unknown, these vapid pronouncements give us a handle with which we can open the door.  No matter that it’s not going to be a very clear view, nor that if we were keeping records, we’d realize that these prognostications were completely off-base. (emphasis added)

Celebrities love The Alchemist because it justifies their fame. They were destined to be wealthy and admired — the very stars in the sky prove this. Everyone else loves The Alchemist because it’s endlessly forgiving. It’s hard work listening to The Universal Language/your intuition/God/wise old men with gold breastplates, but as long as you try to follow your destiny, that’s all that can be expected of you. Something go wrong? It’s just a bump in the path to your true realization.

All of this new-age nonsense aside, let’s take one last moment to consider how sexist this book is. You remember how I said the shepherd boy fell instantly in love with a woman of the desert that he met at an oasis? Well, she’s a strong woman of the desert, so she doesn’t mind waiting while he goes off to pursue his destiny. Women of the desert are strong and are capable of waiting faithfully for their men to return.

‘You’ll remember that she never asked you to stay, because a woman of the desert knows that she must await her man.’ (p. 126)

‘I’m a desert woman, and I’m proud of that. I want my husband to wander as free as the wind that shapes the dunes. And, if I have to, I will accept that he has become a part of the clouds, and the animals and the water of the desert.’ (p. 103)

“I also have Fatima. She is a treasure greater than anything else I have won.” (p. 121)

Oh, right. Thanks for reminding us, Paulo Coehlo, that women are possessions just like treasure, horses, or houses. They are prizes to be won by men brave enough to pursue their destinies. Remember: in Coelho’s world, it’s only the men who have destinies. Women just wait around, hoping to be picked up like so many gold coins.

I’ll tell you what, though. This book was good for many solid laughs. I read sections out loud to Greg, and each time, he’d ask: “Is this a joke?” Sadly, most people don’t seem to realize that’s exactly what this book is. It also means that I won’t make the mistake of reading another book by Coehlo, ever again.