You’re probably tired of hearing me mention that I spent 2 months in South Africa in 2011. Well anyway, I did, and I have a lingering infatuation with the country. So when I spotted the little paperback Dreaming of Light among the pile of IBBY 2014 Honour List books, I knew instinctively that I was going to have to read it. And I am so, so glad that I did. 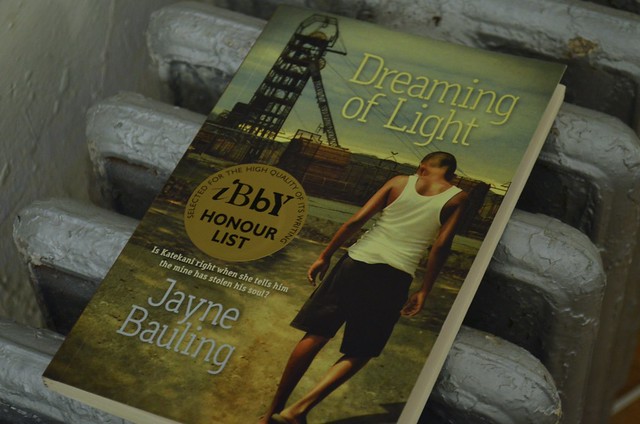 Dreaming of Light is a mere 111 pages, but it’s richer than some novels twice or even three times that length. When I was nearly finished with the book, I read the brief author bio pasted within the front cover and was completely unsurprised to learn that Jayne Bauling is a well-known poet. The prose in Dreaming of Light is so simple, light, and beautiful that I knew no one except a poet could have spun those gossamer phrases. Fitting, then, that it was included on the 2014 IBBY Honour List for the quality of its writing.

Mostly I think about light, especially the sun’s light, but also all the other sorts of light there are. The light you get when you’re up there and outside at night — the white brightness from a big moon, or the thin smile of light when it still has to grow. The bristly points of light from stars, whole masses of them clustered close together, growing into a swirling spill like milk dropped in water. (p. 16)

The novel is narrated by an 18-year-old boy, a foreign zama zama from Swaziland (that itty, bitty, country just to the right of South Africa that people always seem to forget exists). Like the other illegal immigrants from Mozambique, Zimbabwe, and Lesotho, as well as desperately poor South Africans eager for any work they can find, Regile Dlamini is more or less a slave, a disposable zama zama, known only by that derogative Zulu term used to describe the unfortunate men and boys who toil below the Earth’s surface in previously shuttered mines.

It troubles me when people make noise underground. These rock tunnels have their own sounds, the creaks and groans as troubling as explosions or the roar of rockfall. I imagine men’s noise competing against the earth’s voice, and the earth resenting it, and shifting to punish us. (p. 24)

When I started this book, I assumed that it was set 40, 50, even 60 years ago during South Africa’s mining boom. Unfortunately, that’s not the case. It seems that illegal mining has been on the rise in South Africa as recently as the past few years. An article in Bloomberg describes how an estimated 14,000 workers spend months at a time below the Earth’s surface, working to extract ever-more-difficult-to-find gold in mines that were long ago declared too dangerous to work in. This criminal industry generates $6 billion Rand a year, which explains why people are willing to break through the thick slabs of concrete covering mine entrances, force young men and boys recruited illegally from neighboring countries down into the shafts, and refuse to let them re-surface until months afterwards. As you can imagine, many of the workers die from being forced to live underground for weeks, either from exhaustion, poor nutrition, tunnel collapses, or carbon monoxide poisoning.

A substantial percentage of the workers toiling in the mines are children. Bauling’s conflicted hero Regile Dlamini is only 18, yet he has hardened far beyond his years. It is only with the arrival of a hopeful Mozambican boy, Taiba Nhaca, and his small friend, Aires, that the last traces of humanity are awakened within Regile.

Taiba waxes lyrical about the legendary Spike Maphosa, a former South African zama zama who allegedly escaped from the mine in which he was forced to work. Now Spike spends his time working to liberate other children from the same fate. Regile no longer believes that Spike Maphosa exists; indeed, neither do any of the other boys in the mine — except for Taiba. Eventually, Taibi wears through Regile’s tough exterior, reawakening the small kernel of kindness lodged deep within Regile’s largely hopeless existence.

Bauling has remarked that although her YA novels are quite dark, she suspects that they are helpful for children and teenagers facing many of the challenges discussed in her books:

I think teens want and possibly need to read about people their own age facing the same challenges as they do. It’s a way of knowing they’re not alone, and while my stories can be quite dark, I believe they also offer a spark of hope. (source: interview from For Books’ Sake)

The plot of Dreaming of Light might seem farfetched, exaggerated, blown out of proportion, but sadly it isn’t at all. It’s hard to imagine that level of desperation and greed unless you’ve seen it yourself — not that I really have; I’ve just come closer to observing it than some people, I suppose. One would think that by 2014, child trafficking for illegal and often fatal mine work wouldn’t be happening in South Africa, but it is. And perhaps most tragically, there doesn’t seem to be much compassion toward the illegal immigrants who flee even worse economic conditions in Mozambique, Zimbabwe, Lesotho, Swaziland, and elsewhere for a chance at something like prosperity in the relative powerhouse that is South Africa. Just have a look at some of those comments on the Bloomberg article. Racism and xenophobia, that. I remember that when I was in South Africa, people always warned me to be on the lookout for “dangerous Nigerians,” who were supposedly criminal by nature. (I bumped into one at the beach. He wanted my phone number.)

Back to the book. As I’ve said before, it’s beautifully written. Here are a few more of my favorite passages:

Telling someone things about myself gives me a wrong feeling, as if some other person is using my voice, speaking through my mouth. (p. 14)

As if we aren’t facing enough dangers here, forcing the angry earth to give us its gold. (p. 30)

‘It’s a story like smoke, I think. No one can catch it because there’s nothing there. It changes all the time.’ (p. 31)

Will he have turned mad, lost his mind? Become a creature of the darkness? He must belong to the earth after so long. Maybe he won’t want to come out. Won’t want to leave the mine. (p. 43)

I lie on the mattress and stare up at the sky I haven’t seen for so long. The trails of massed stars look like swirls of foam. (p. 61)

‘His hope is in you, Regile.’ Katekani’s voice drops into such thoughts like the first plop of rain into the dust and the end of the dry season. (p. 95)

I don’t want to give away the ending, but suffice it to say that a few tears may have been shed. I was so relieved on Regile’s behalf; I never wanted him to have to go back down into the mine, ever again.

Dreaming of Light is undoubtedly a dark story, not least because everything that is described in the book is actually happening in South Africa. This is one of those rare cases in which I would advise sticking with the recommended age, 12+. It’s almost universally adored on Goodreads, and it is a quick, simple, moving — and ultimately, hopeful — read. Jayne Bauling has a newfound admirer in me. I hope to read many more of her YA novels, starting with E Eights and Stepping Solo.

9 thoughts on “A Marvelous South African YA Novel: ‘Dreaming of Light’ by Jayne Bauling”