When The Kite Runner came out several years ago, I read it immediately and loved it, as did millions of readers across the world. Then I read A Thousand Splendid Suns and came away with a funny feeling. I wondered if it was just me, since the book got mostly positive reviews. But part of that strange, unsettled feeling is back now that I’ve finished And the Mountains Echoed. It’s almost a good book, but several things get in its way. What, exactly, is going wrong? And if I were to go back and re-read The Kite Runner today, would it confirm several of the reservations I have about Khaled Hosseini’s writing? 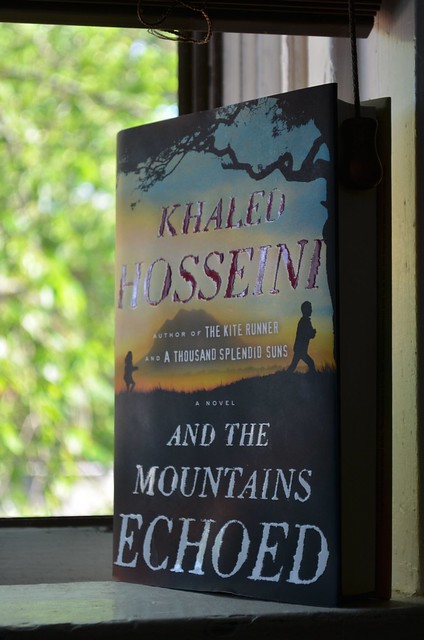 First, the story. Or stories, as it were. The first chapter in And the Mountains Echoed is beautiful and left me very excited for what was to come. Unfortunately, I think the first chapter is the best part of the book. In it, a loving father tells his young son a traditional Afghan story in which a div, a mythical creature that steals human children, robs a humble farmer of his favorite son. The tale is the perfect setup for the rest of the book, which revolves around the unspeakable division of a sister and her brother. Saboor is an impoverished farmer whose wife has died. After he re-marries, money gets even tighter as the humble village into which he was born falls further into agricultural and financial despair. He is easily persuaded by an urbane uncle to sell his daughter, Pari, to a wealthy, childless family in Kabul. And thus, the div story moves from fable to real life. After he realizes what has happened, Pari’s brother, Abdullah, spends the rest of his life longing for his sister—to the extent that he gives his daughter, Pari, the same name.

And then the tangents start. It’s probably harsh to describe them that way, but I don’t know — the multiplicity of revolving stories seemed random and unjustified, in my opinion. I kept waiting for the story to come full circle, for Pari and Abdullah to be reunited, but by the time it finally happened I was already ready for the book to be over. To make things easier on myself, here is the basic progression of the novel:

Chapter 1 – Afghan fable
Chapter 2 – Pari is sold to the wealthy Wahdati family in Kabul
Chapter 3 – We learn why Pari’s stepmother, Parwana, was desperate to marry Pari’s father
Chapter 4 – Pari’s uncle, Nabi, explains why he arranged for Pari to be “adopted” by the Wahdatis
Chapter 5 – A neighbor across the street from the Wahdatis, who now works as a doctor in the United States, returns to Afghanistan full of guilt and cultural disassociation
Chapter 6 – We catch up with Pari 22 years later in Paris, and learn that her relationship with her adopted mother, Nila, was extremely unhappy
Chapter 7 – Back in the humble village of Shadbagh, where Pari was born, a 10-year-old boy learns that his egregiously wealthy jihadist father is not a good person. He interacts with Abdullah’s half-brother’s son (confused yet?), who spent years in a refugee camp in Pakistan. In other words, we learn that Abdullah’s family did not fare well
Chapter 8 – Mr. Markos, the Greek doctor who lives in the Wahdatis’ old mansion in Kabul, recounts his childhood on the island of Tinos and explains why he became a plastic surgeon
Chapter 9 – Abdullah’s little girl, Pari, describes her upbringing in California. Abdullah is now old and suffers from Alzheimer’s. Abdullah’s sister, Pari, finally puts together the pieces of her life and flies out to California to meet her long-lost brother and niece.

I understand what the book was trying to do. It was supposed to demonstrate how a singular event could affect a family over the course of several generations. Likewise, it was also meant to depict how very different people, with vastly different lives and experiences, could intersect through a series of shared spaces and connections. And, to a lesser extent, it was about the changing Afghan landscape from 1952-2013.

While I appreciate multifaceted points-of-view and overlapping storylines, it’s difficult to handle a fractured plot with grace. Which is why, surprisingly, the book that most closely reminds me of And the Mountains Echoed is the futuristic, 6-part frame tale Cloud Atlas. Cloud Atlas was meant to be an opus to environmentalism and a sophisticated criticism of massive corporations, but David Mitchell was overly ambitious. That doesn’t mean that Cloud Atlas isn’t a good book, and it doesn’t mean that And the Mountains Echoed isn’t worth reading. It’s just that neither feels entirely finished, because in each case the premise overshadowed the execution.

I also wonder if And the Mountains Echoed would have been better if Khaled Hosseini had taken more time to write it. Hosseini is capable of generating beautiful, melodious prose, but unfortunately it’s often juxtaposed with strange phrasing and out-of-place descriptions. In a word, his writing is inconsistent. On page 377, for example, Hosseini does a wonderful job explaining how love can be stifling:

It was in the tender, slightly panicky way he spoke these words that I knew my father was a wounded person, that his love for me was as true, vast, and permanent as the sky, and that it would always bear down upon me. It was the kind of love that, sooner or later, cornered you into a choice: either you tore free or you stayed and withstood its rigor even as it squeezed you into something smaller than yourself.

Compare that quote to one just a few paragraphs prior, on page 366:

I could see the struggle in his face… Of the power I wielded, through my absence, to make him unhappy, to maul his open vulnerable heart, if I chose to, like a Doberman going to work on a kitten.

Strange metaphors lie across the page from poetic descriptions. Just as the writing itself is inconsistent, so, too, is the passing of time in And the Mountains Echoed. Some chapters span a few days; others, several decades. The stories take place in Afghanistan, Greece, Paris, and the United States — a very literal way of getting across the “worldwide reverberations” concept. Hosseini also seems to have a bizarre preoccupation with describing each character’s physical characteristics, and always along the same dichotomy: beautiful vs not beautiful. Nila Wahdati is gorgeous. Parwana is not. Each Pari is average looking. Nabi is uncharacteristically handsome, while Idris is just normal. It goes on.

By the end, I knew that I was supposed to cry. Several of the scenes were written specifically to be tearjerkers. We all know that Alzheimer’s disease is tragic, that it can’t be stopped, and that the victim of said disease is completely blameless. What’s more tragic than a long-lost sister finally making it home to see her brother, only to discover that he no longer has any memory of her? It seemed, if not calculated, then at least shoddily put together. Or perhaps I’m just heartless. (But that can’t be true. I cried for an hour just last week over something fairly insignificant). I knew that this book was supposed to touch me on some deep level, yet I was also aware that Khaled Hosseini had written the book specifically to make his readers feel that way. And that seems disingenuous.

Overall, I feel bad that I’m giving this book such a harsh review. Which, ironically, is further evidence of its emotional manipulation. I admire Khaled Hosseini, and I even liked the premise of this book, but it simply didn’t have the impact on me that it was supposed to have. I believe that there are countless stories worth telling about not just Afghanistan, but the entirety of the Middle East/Central Asia — stories that can’t be found in any other region of the world. But if you are going to attempt to write those stories, you must be extra cautious that you give them the attention and nourishment that they deserve. If you do, you will end up with a groundbreaking work like Marjane Satrapi’s Persepolis, and if you don’t, you will end up with something slightly hollow, something not-quite-deserving of the praise it’s gotten, like And the Mountains Echoed.

23 thoughts on “The Book I Wanted to Like: And the Mountains Echoed”