This salad is one of the best things I’ve eaten in a long time. Seriously. I’ve made it twice in the past month, and while that may not sound like a lot, it is considering how disorganized I am when it comes to grocery shopping! I can never remember to buy all of the ingredients to make an actual dish. Hence my accidental (but tasty!) substitution of arugula for spinach at the last minute. 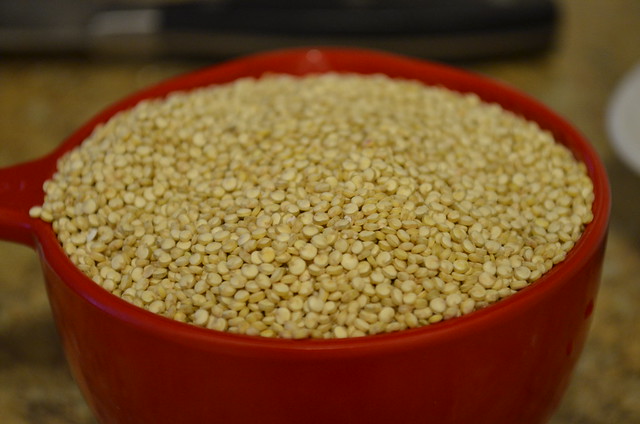 1. Start with the quinoa. Bring the vegetable broth to a broil in a covered pot & then add the quinoa. Turn heat down. Let the quinoa simmer gently for about 12 minutes, or until the quinoa has absorbed all of the liquid. Be sure to stir occasionally. 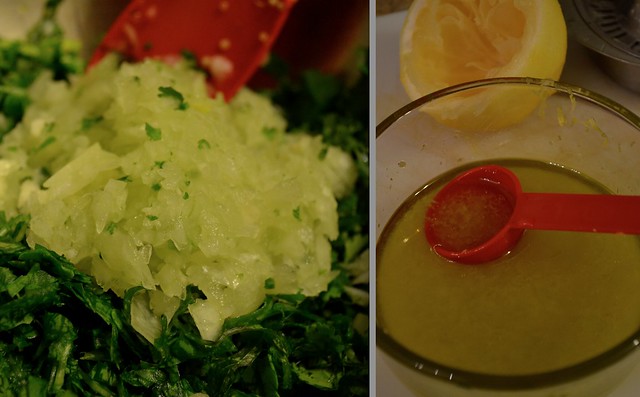 2. While the quinoa is cooking, chop a bunch of spinach & cilantro together in a food processor. Put in bowl. Then chop the onion with the garlic & add to greens. Drain & rinse chickpeas, then add to bowl and stir. When the quinoa has cooled, stir it in as well.

3. For the dressing, combine everything in a little bowl and stir it all together. It will be very tangy, but don’t worry–this counteracts the taste of the spinach and/or arugula. As you can see, I was lazy and used the tablespoon to mix everything together instead of a proper utensil. Pour the dressing over the greens, onions, and quinoa and mix well. 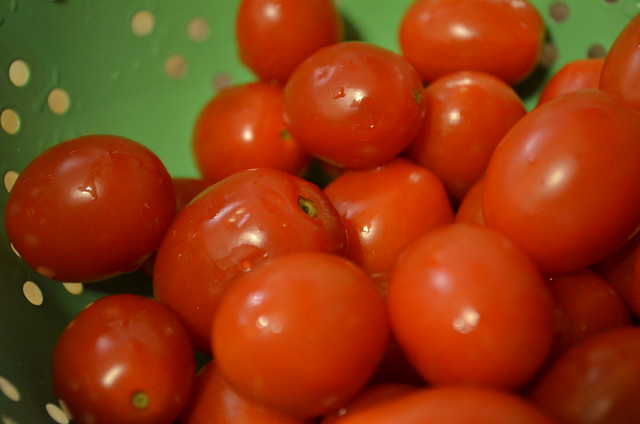 4. Chop up about a cup of cherry tomatoes and cut an avocado into fairly small pieces. Mix those into the bowl as well, and as a final touch, squeeze the juice of a lime over the whole thing. 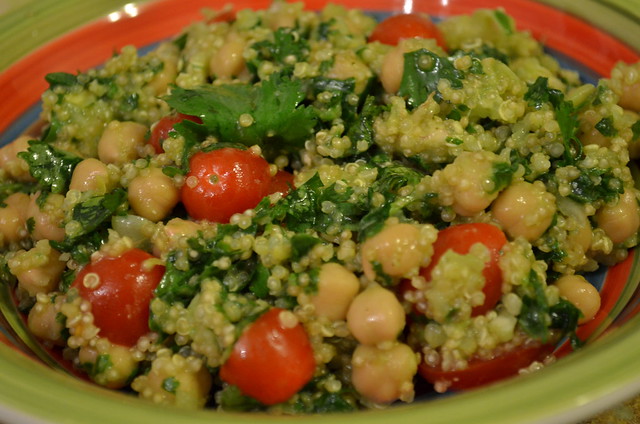 It does taste better if you let it sit in the fridge for about 15 minutes so the ingredients have a chance to cool down, but if you’re like me and can barely stand to take one photo before diving in, I don’t blame you!

I realized after the fact that this recipe is both vegetarian AND vegan. I don’t really pay much attention to that, but if you have either a natural or an acquired aversion to meat and/or gluten, then you can still eat this! Yay!

P.S. I apologize if the photography seems a bit rushed–G. and I were very hungry! Next time I’ll try to be as stylistic as my lovely friend Monica who runs the adorable food blog “Pass the Cocoa.”

17 thoughts on “Spring Salad: Cilantro, Lemon, Quinoa, and other goodness”