Today I bring you a collection of amazing illustrations by the wonderful Isol, arguably Argentina’s most famous illustrator of children’s books. Born Marisol Misenta in 1972 in Buenos Aires, she publishes under the moniker Isol, a quirk that serves to make her all the more endearing. Given my historical interest in the children’s literature of Argentina, I decided that since I’ve already studied Argentina’s most famous children’s book author, María Elena Walsh (post forthcoming), it was high time for me to feature the work of that country’s most celebrated illustrator as well.

Isol burst onto the scene with her first book, Vida de Perros (“Life of Dogs”), in 1997. It’s a lighthearted but clever tale about a boy who wishes his life could be more like his dog’s. The illustrations are typical of Isol’s earliest drawings: brash, colorful, with splashes and scratches that unabashedly stray outside of the lines.

Overall, Vida de Perros was an exciting and extremely promising start for the young illustrator. Isol’s earliest publications laid the foundation for a career that Bookbird editor Roxanne Harde has called “both prolific and notable.” Isol’s books have been published in over twenty countries, including Mexico, the United States, France, Korea, Switzerland, Spain, Argentina, and, most recently, Sweden. Isol has already been nominated for the Hans Christian Andersen Award not once, not twice, but three times (in 2006, 2008, and 2014), and made history as the first Latin American illustrator to win the Astrid Lindgren Memorial Award in 2013. If the Hans Christian Andersen Medal is the most respected prize in children’s literature, then the Astrid Lindgren Award is the biggest. Recipients are awarded 5 million Swedish Krona (nearly $1 million USD) by the Swedish government, and enjoy a whirlwind of literacy and press events. It’s safe to say that Isol’s well-deserved success has been nothing less than phenomenal thus far!

Just as Vida de Perros was exceptionally well-liked, so was Isol’s next book, Un Regalo Sorpresa (“A Surprise Gift”).

In Regalo Sorpresa, a boy finds a box hidden in the closet and is barely able to contain his excitement as he imagines all of the things that could be inside. Again, the illustrations are in Isol’s archetypal style, featuring bold, slightly messy lines and exaggerated proportions.

Although it’s always easy to spot books by Isol, it seems that her work is divided into two basic color palettes: one filled with warm-toned reds, oranges, and brows, and the other full of soft, pastel yellows, greens, and blues. The former palette is typical of much of her “earlier” work from 1997–2004. My favorite book from this set is the incredibly creative Piñatas, in which a boy at a birthday party is too afraid to hit the candy-filled decoration. He ends up going on a sort of Twilight Zone journey into a nether region: The City of Broken Piñatas. His guide, a particularly loquacious piñata, takes him to bizarre after increasingly bizarre location. It turns out that only the brave piñatas that get smashed end up living happily ever after. The unbroken piñatas are doomed to reside, interminably, in the Quiet Sea.

In the end, the boy realizes that not only is it perfectly fine to hit piñatas, but it’s a ton of fun as well!

I sometimes wonder how children’s book authors come up with all of their weird stories. Isol has emphasized the importance of creativity in her work. When she won the Astrid Lindgren Memorial Award, she shared the following sentiments during her acceptance speech:

I don’t actually think that I must put a limit to my imagination just because it’s a book for children, on the contrary! What reader could be more demanding than a child? Children have a lot of things to discover and I’d better be on their high level in order to satisfy their huge capacity for curiosity.

One of the most prominent aspects of Isol’s short yet distinguished career is her frequent collaboration with Argentine poet Jorge Luján. He read her book Cosas que Pasan and was so impressed that he suggested they work together on a a comic book hybrid. Shortly afterwords, volumes one and two of Equis y Zeta (“X and Z”) appeared.

The next book that Luján and Isol wanted to publish together, Mon Corps et Moi (“My Body and I”) was considered too strange to be successful. It was rejected by several Latin American publishers, and the co-creators had to look toward Europe to find a publisher. Eventually, Éditions du Rouergue agreed to publish the book in French.

The entirety of the text in Mon Corps et Moi is a short poem, as follows: “My body and I are not at all alike / It is flabby and elongated / Whereas I can transform myself. / It walks all straight, / Whereas I go right and left.  / It dives into the water / Whereas I take off for Dreamland. /  It puts on wrinkles / Whereas I always remain the same /  My body and I are not alike at all /  But it is the one I prefer / Because it lends me the eyes through which I see.” (Translation as provided by ALIJA, the Argentina National Section of IBBY, in support of Isol’s nomination for the Hans Christian Andersen Award).

The abstract drawings are the perfect complement to the text, which describes a boy’s strange, almost dissociative, relationship with his body. It’s a heady allusion to the classic philosophical dilemma, the Cartesian divide.

The next Isol/Luján co-creation is Ser y Parecer (“To Be and To Seem”), which again considers the divide between perception and reality.

Jorge Luján was once asked why he enjoyed working with Isol. His comments about her work were insightful and revealing:

The German playwright and poet Bertold Brecht wrote that the first duty of theater is to entertain. I think that under Isol’s aesthetics lies a similar saying: Boring books are not allowed! Isol has an enormous capacity to make visible the psychology of the characters. They don’t look all alike, each one has its own personality, intentions, particular moods… Isol’s work recreates children’s thoughts and aims, in a way she reinvents childhood. Reading her books makes us understand that children have a complex and richer universe than those presented in the majority of books addressed to them. (source; emphasis added)

The theme of Ser y Parecer is self-discovery, as the narrator ponders the inconsistencies and absurdities in life.

But my favorite Luján/Isol collaboration is Numeralia, not least because of the lovely, dreamlike illustrations.

There is an overabundance of basic, instructional books intended to help children learn how to count, yet Numeralia is certainly one of the best. As Luján writes, El 0 para aprender cómo se para un huevo (Zero is for learning how the egg came to exist).

And what better way to teach children both the number eight and the concept of infinity than with a drawing of an hourglass?

The books that Isol has both written and illustrated are no less delightful. My two favorites are Secreto de Familia (“The Family Secret”) and El Globo (“The Balloon”) because they are both playfully subversive. In Secreto de Familia, a little girl wakes up and finds her mother in the kitchen. Only, she’s never seen her mother look quite like that before!

Horrified, the girl is convinced that her mother is really a porcupine. And then then girl begins to fear that when she grows up, she’ll become a porcupine, too! Of course, it’s all explained in the end.

El Globo is even more subversive. A young girl has come to dread conversations with her perpetually angry mother. One fateful day, the girl wishes that her mother would turn into a balloon. And she does!

There are two more of Isol’s books that I would like to share with you quickly. As usual, I’ve saved my absolute favorites for last! The first, Aroma de galletas (“Scent of cookies”) was born out of a collaboration with Spanish poet Antonio Fernández Molina. It is filled with witty couplets, amusing poems, strange anecdotes, and, of course, some of Isol’s finest illustrations. In his review of the book, Jacques Vidal-Naquet called it “an exceptional moment of reading that is beyond the ordinary.” 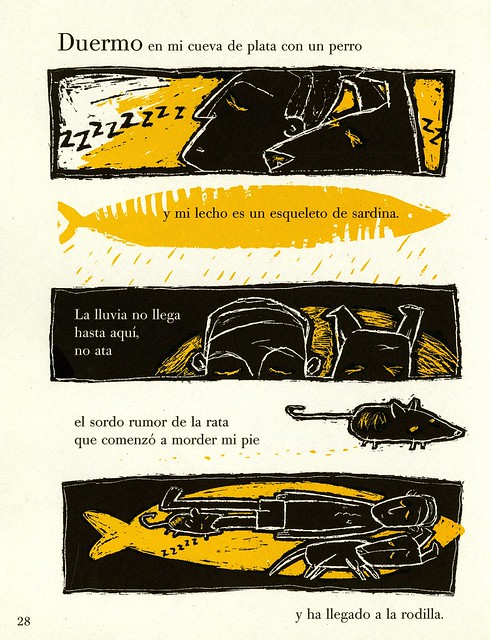 And, finally, the best for last. I’ve seen many bloggers and writers declare that they like Isol’s illustrations for El Cuento de Auggie Wren (“Auggie Wren’s Christmas Tale”) the most. I confess that I have always been a huge fan of collage-style illustrations, not least because I imagine they must take a huge amount of time to create! 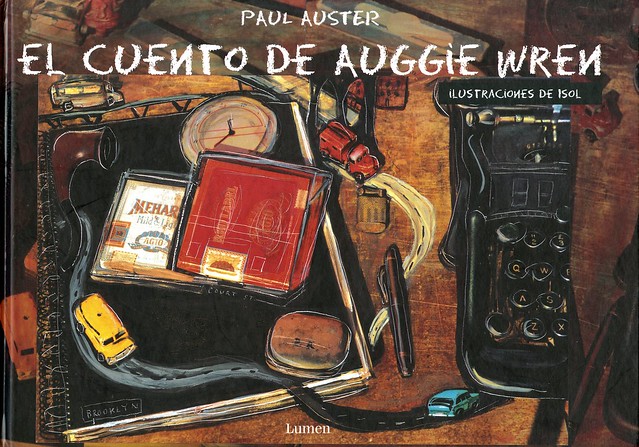 I will further confess that I didn’t bother to read the book in Spanish. But that’s ok — turns out that the story was originally published in English, and is available online here. It’s a funny little tale about photography, blindness, and Christmas, but Isol’s illustrations lend credibility to its absurdity. 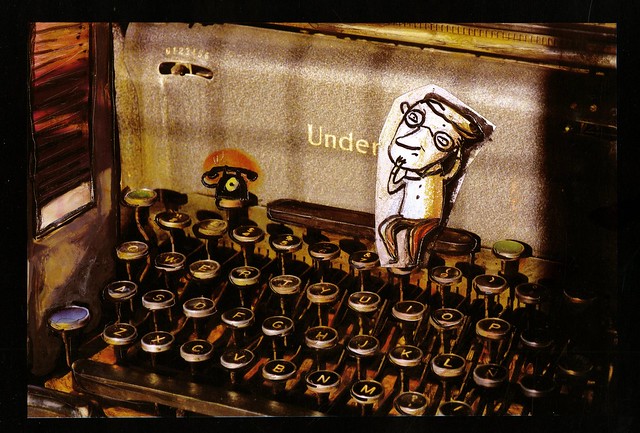 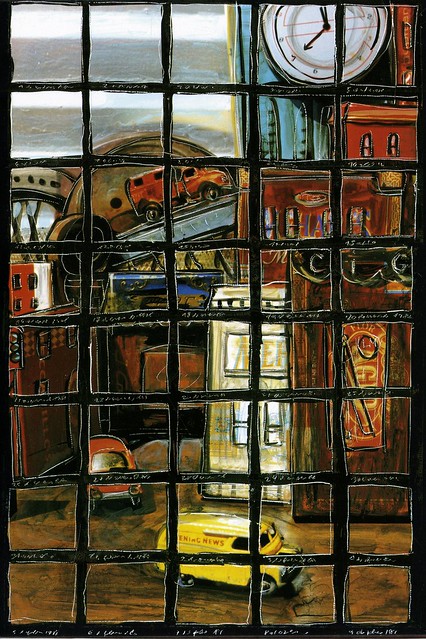 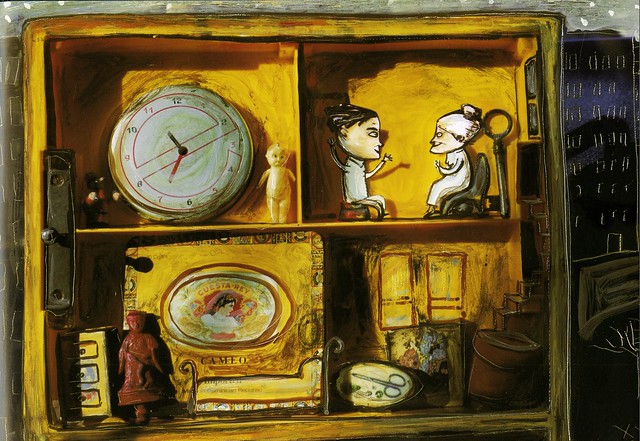 There were two other books that I wanted to feature but was unable to. Luckily, both are available online elsewhere. The illustrations for the charming Tener un patito es útil (“It’s useful to have a duck”) can be viewed here, and some of the drawings from Nocturno: Dream Recipes are available on the Imaginaria website (scroll to bottom of page).

Finally, I am extremely pleased to report that no fewer than SIX of Isol’s books are available in English, all through Groundwood Books. You can purchase Beautiful Griselda, Doggy Slippers, It’s Useful to Have a Duck, Nocturne, Numeralia, and Petit, the Monster from the House of Anansi website, here.

In addition, if you live in the Chicago area, several of Isol’s books are available at the newly-opened independent bookstore Bookends & Beginnings, including Petit, the Monster and Numeralia in English, as well as “It’s Useful to Have a Duck” in Swedish and Spanish. More information on their Facebook page.

Isol is apparently already working on her next book. She is married with a baby, and has said that the theme of her next story is simply “babies.” She remarked that “It’s the oldest story in the world, but the newest one for me, and this is how I’m telling it, from this marveled and dazzled strangeness.” I am sure it will be a treat!

For more of my features on children’s literature, including a thorough review of Hans Christian Andersen award-winner Roger Mello, please click the “Children’s Literature” link in the right sidebar.

[1] Archives of the Astrid Lindgren Memorial Award blog, March 2013–February 2014. In particular, I referred to the following posts:
Boring Books are Not Allowed!
Isol in Sweden for Litteralund
The Award Week Begins
A Chat with Isol

[6] The official announcement on the Astrid Lindgren Memorial Award website.