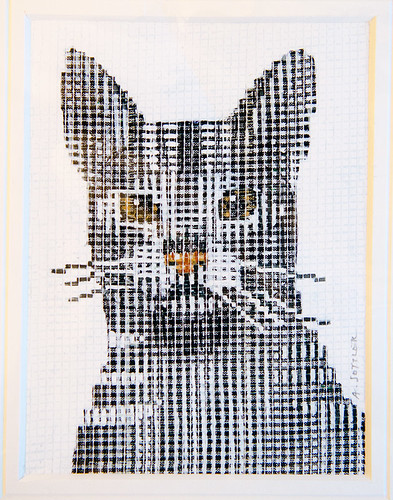 A few months ago, I put together a feature on the Slovene children’s book illustrator Alenka Sottler as part of my series on the 2014 Hans Christian Andersen Awards. Like the other children’s literature posts that I do from time to time, the feature was well-received and a few people shared the link on Facebook. Nothing much happened for the next several months, until, one day, a notification from WordPress appeared on my phone. I glanced at it hurriedly, saw the name “Alenka Sottler,” and dismissed it as a fluke — it was early in the morning, I needed a strong cup of coffee, and I was, of course, already late for work. When I returned to the comment later in the day, I could scarcely believe it: Alenka Sottler herself had found my blog.

Dear Alina!
First and foremost, I would like to thank you for your interesting comment on illustrators and my work. I read your text… a while ago and I wanted to add a note but it wasn’t until now that I found the time to send you a few words regarding the ‘digital illustration’ in my book The Emperor and the Rose…  It is a book of modern fairy tales through a woman’s perspective and narrated by using old-fashioned language… by the way, the cat that you like so much is a magic animal in the book. He helps a prince to win a princess. If you would want to have a print of this illustration I would gladly send you one, just let me know the address.
Kind regards from your almost a namesake,
Alenka Sottler

I promptly sent her an email thanking her for the kind words and extremely generous offer to send me an original print of the cat, whose named, I learned, was Motz. After a quick email exchange with Alenka’s assistant, the address was confirmed, and the cat print shipped off.

In the meantime, I moved to New Zealand. It had been 8 months since the original blog post, 4 months since Alenka left the comment, and 4 weeks since I had heard from her assistant. Sure enough, though, Motz the magical kitty arrived in Ohio, U.S.A. in late November after a long overseas journey. I asked to be emailed a photo of the print, which is what I posted above. Although I’ll be gallivanting across New Zealand for the foreseeable future, and it may be another year before I see the illustration in person, it hardly diminishes the beauty of the exchange. 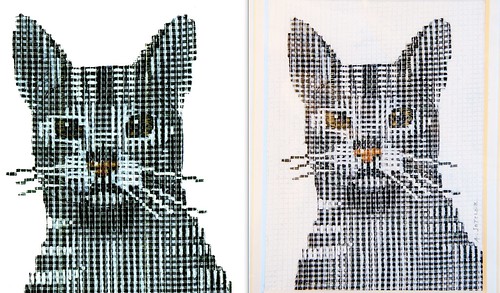 I went back to my original post to compare the two images side-by-side. Motz, as he appears in Sottler’s book “The Emperor and the Rose,” (left), has deep and thoughtful brown eyes, is stenciled slightly darker, and has more of a cool, blue-gray tone. In contrast, Motz, as he appears in the print, (right), has subtly sharper eyes, lending him an intelligent and mischievous expression, and is set against a yellow background. It’s fascinating to see that the grid-like pattern originally extended across the entire sheet of paper, and was probably digitally removed in post-processing. It’s an archaeological remnant, a rare clue about Sottler’s illustration technique, that demonstrates visually the process as Sottler described it: “I made illustrations on cotton cloth with tartan pattern used in the sixties by Slovenian housewives for making bed linens. This cloth pattern is very similar to knitting. In addition, digital images of our time are ‘cubic’ as well.” Traces of the old, blended with modern elements, an artistic fusion that provides classic fairytales with a unique subtext.

So, let’s retrace the steps. A library assistant, enamored with a pile of beautifully illustrated children’s books, decides to write about them on her blog. A Slovene artist, hard at work, reads the post while “perched in a wooden cottage situated on the slope of a mountain range.” Compliments are exchanged, a promise is made, and a magical cat delivered halfway across the world. It doesn’t get much lovelier than that.

I dearly hope that I get to meet Alenka Sottler in person at the 2016 IBBY World Congress in Auckland.