Apart from a 3-hour meander along the Salmon Creek Trail in Mt. Hood National Forest, the 13.5 mile hike to Tunnel Falls three weeks ago was our first real trekking foray in the Portland area. It was a gorgeous, warm, and sunny weekend that could not be wasted.

We drove our Ford Focus rental car north along Highway 84 to the Eagle Creek Trailhead, where we circled the lot twice before finally parking in a dubious spot. With the requisite Northwest Forest Pass hung securely on the rearview mirror, we hauled out our largely unnecessary packs and commenced the hike. 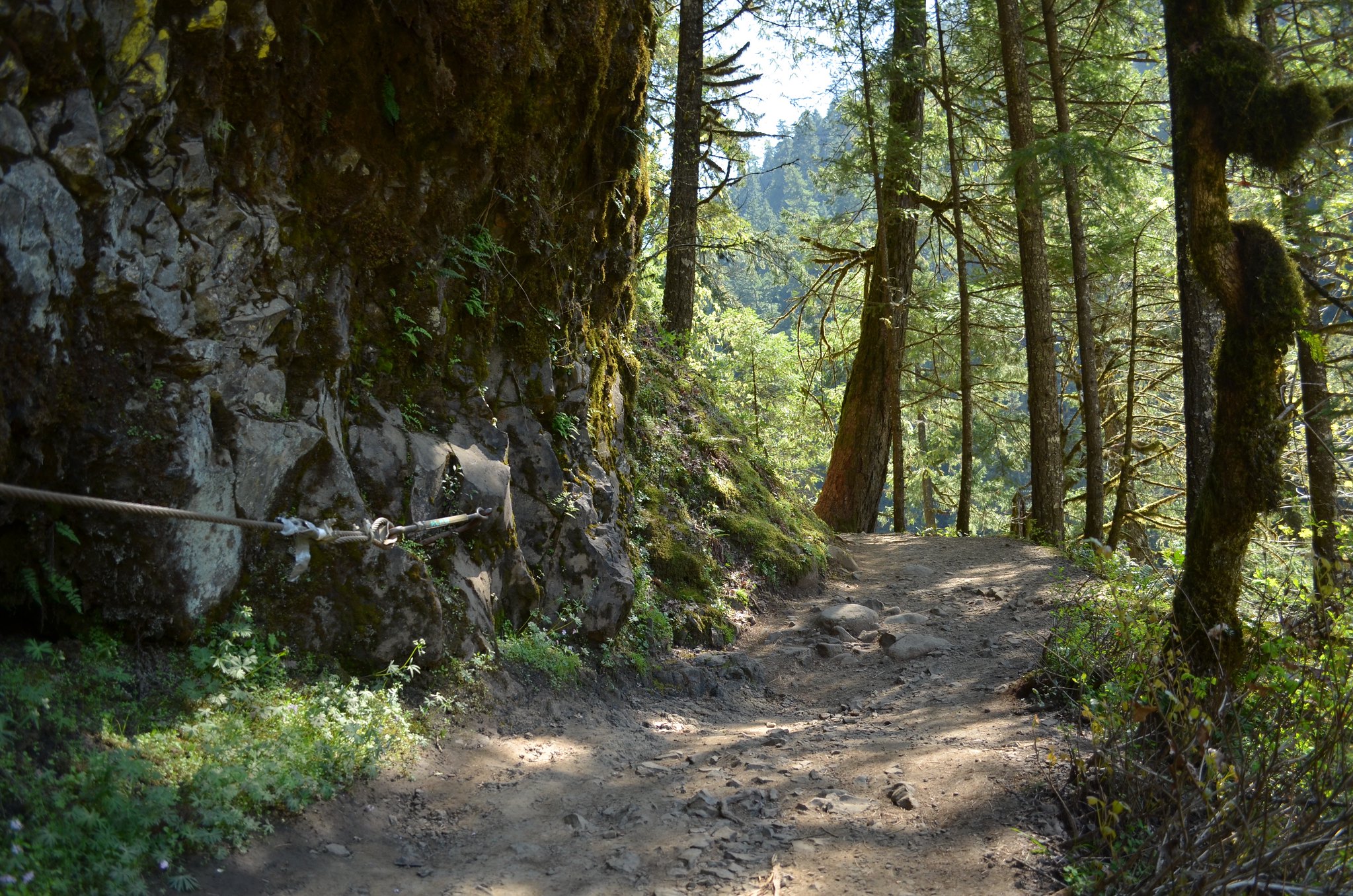 The trail was surprisingly popular; popular, at least, in comparison to the trails in New Zealand. While I’m sure that a much higher proportion of the New Zealand population hikes regularly, the NZ population is so much smaller to begin with that even the most favored trails are still less crowded. The Columbia River Gorge is a gorgeous area with seemingly endless hiking opportunities, and I’m eager to explore more of it in the months to come. 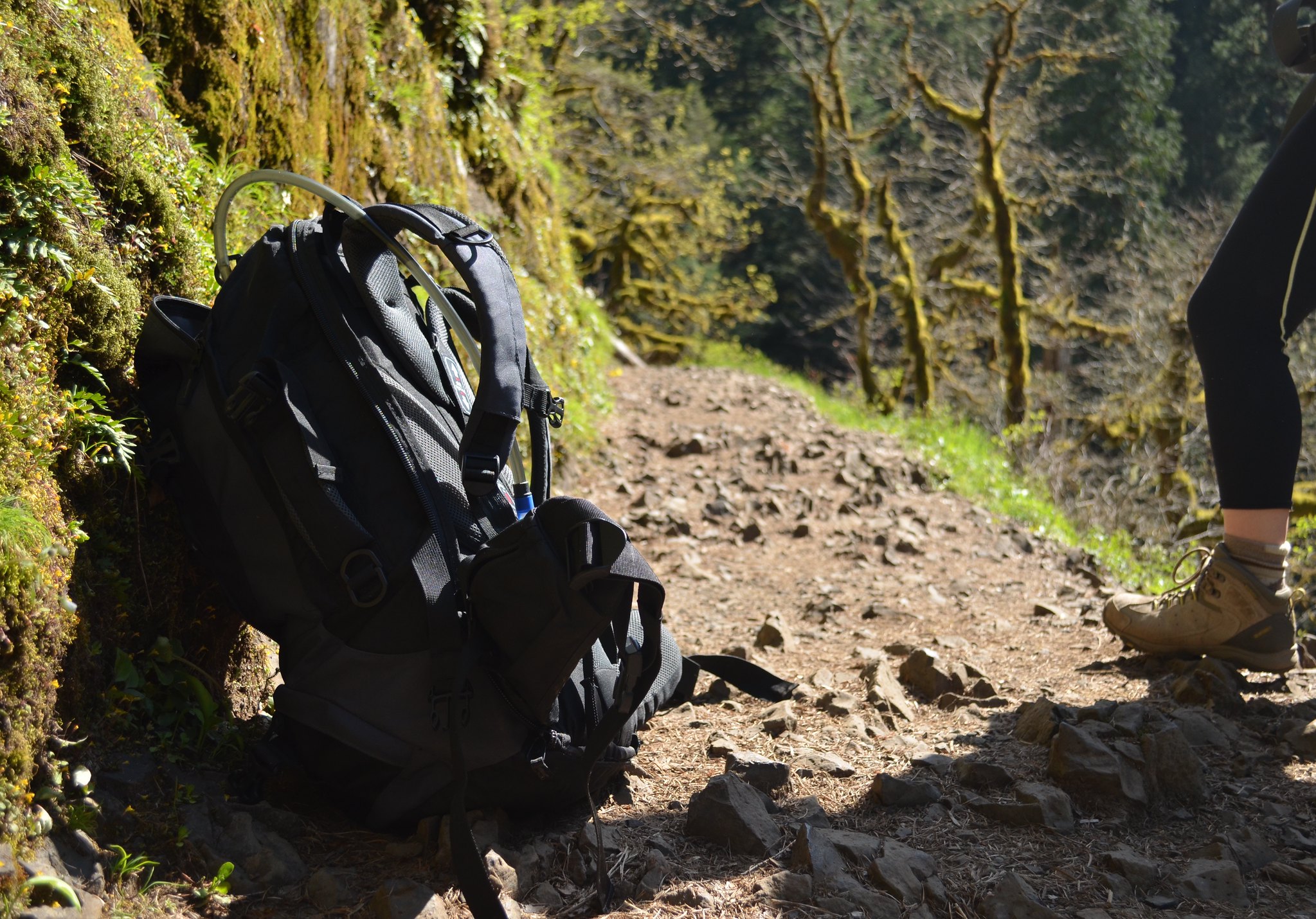 Tunnel Falls was not exactly a beginner hike; though there was little elevation gain, the sometimes rocky narrow and rocky trail — not to mention the distance — meant that we did find it challenging. That didn’t deter people with tiny teacup dogs from trying to hike it, though.

The popularity dropped slightly after we came to our first bridge outage. Having never encountered so much as a stray branch in New Zealand, seeing the downed bridge was a sad reminder of America’s lack of investment in public parks. Also very American was the dude attempting to cross it. 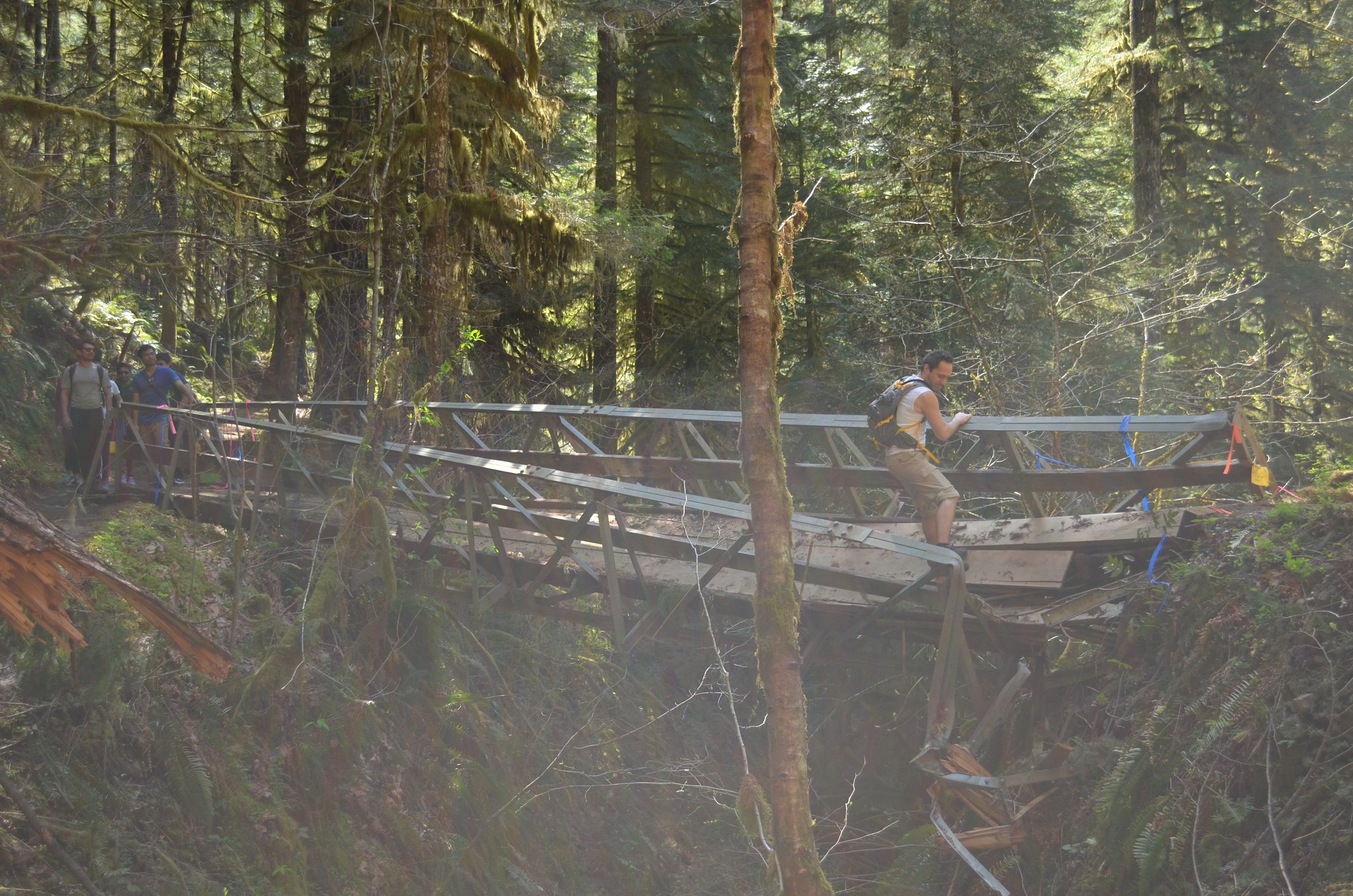 Moss, frothing rivers, and verdant vegetation were plentiful. The plethora of bridges kept it interesting, as did the numerous waterfalls along the way. When impatient, I would point to the nearest cascade and claim that it must be Tunnel Falls, but as every hiker knows, you’re just about to reach your destination when all hope is lost. 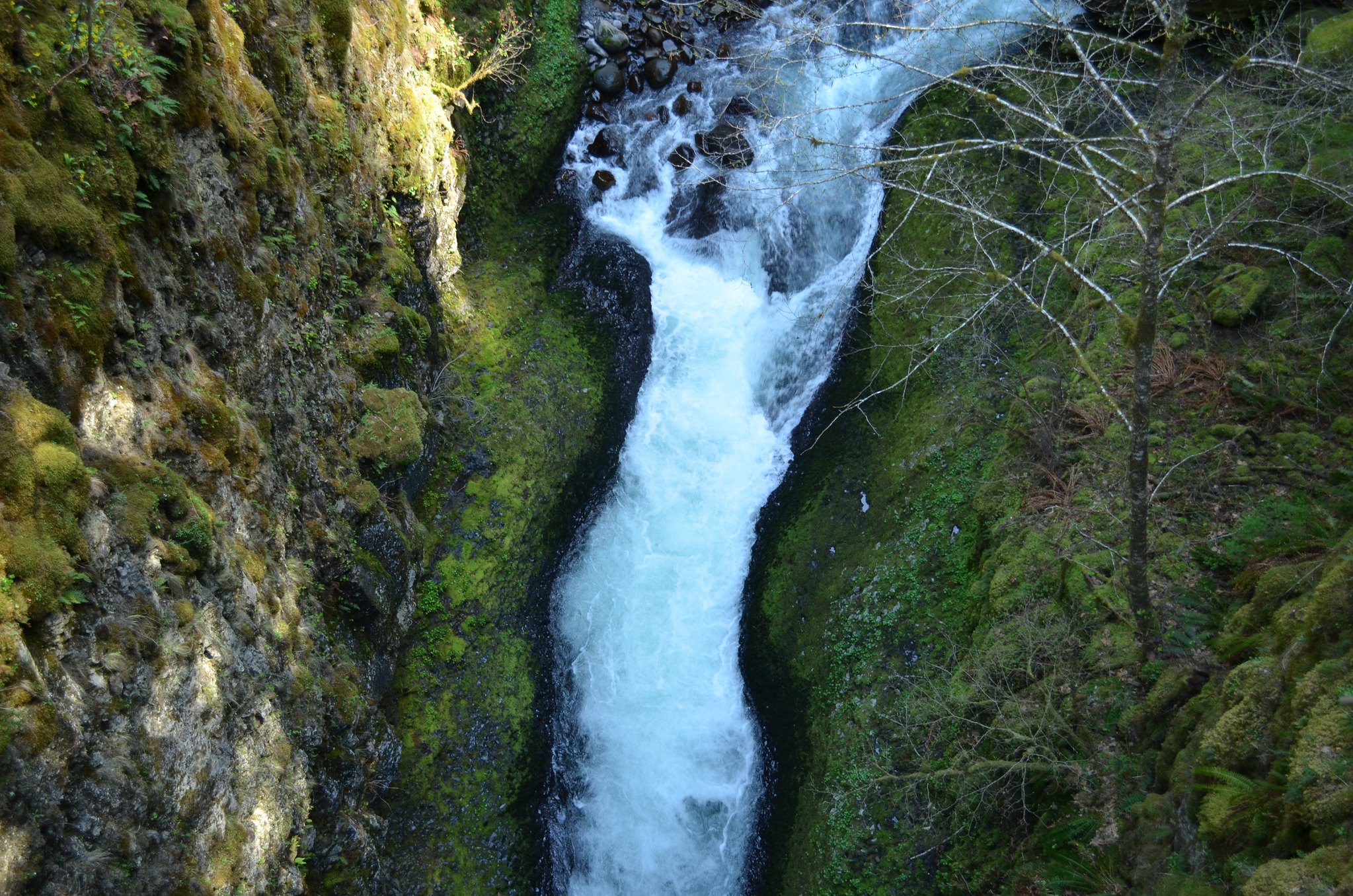 And here it’s appropriate to wax lyrical about the benefits of living on the West Coast, where 13.5-mile hikes are possible in April and there’s no snow, salt, or ice to destroy the exterior of your car and shoes. In fact, back in January when most of the East Coast was incapacitated by a blizzard, we were outside in Sellwood Park playing tennis. 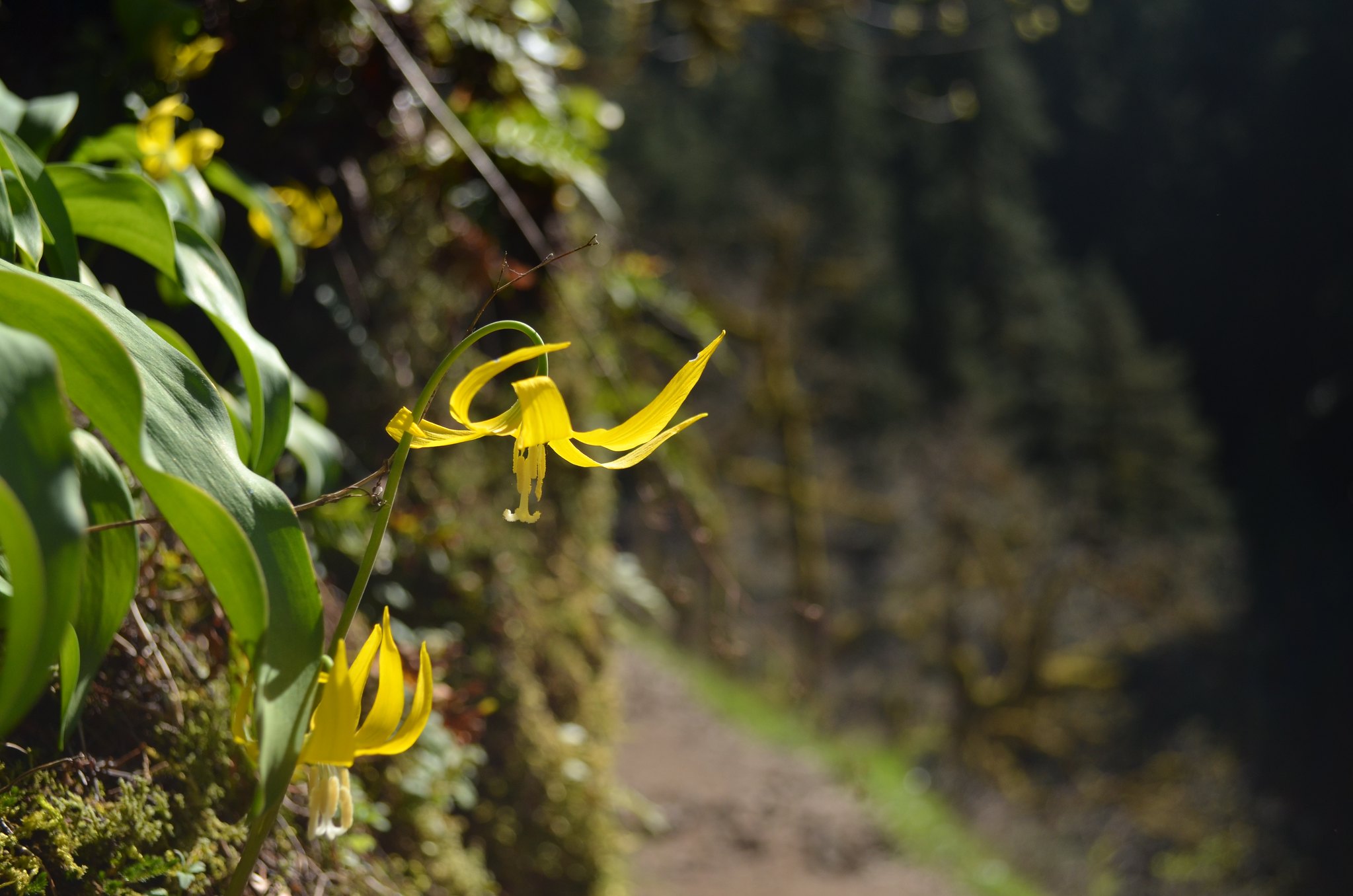 But back to the hike at hand. Several pack-bearing dogs later (the permutations on bikes, dogs, and baby carriers are endless in Portland), we reached our destination: Tunnel Falls. 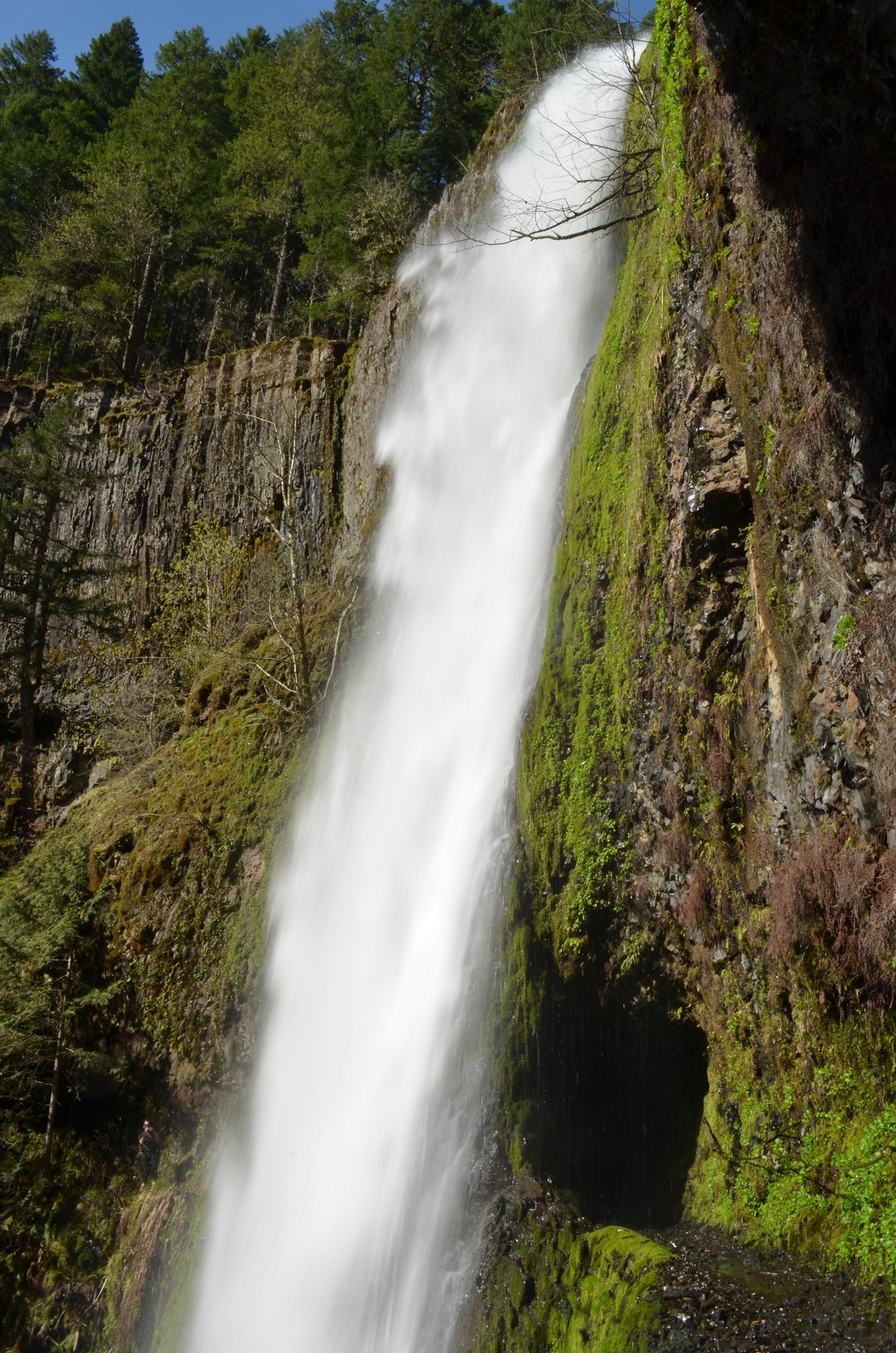 To be honest, I expected to be disappointed after being exposed to the New Zealand terrain. But Tunnel Falls is exciting enough to maintain a sense of the primordial; the sheer volume and velocity of the water is enough to remind you of your mortality. 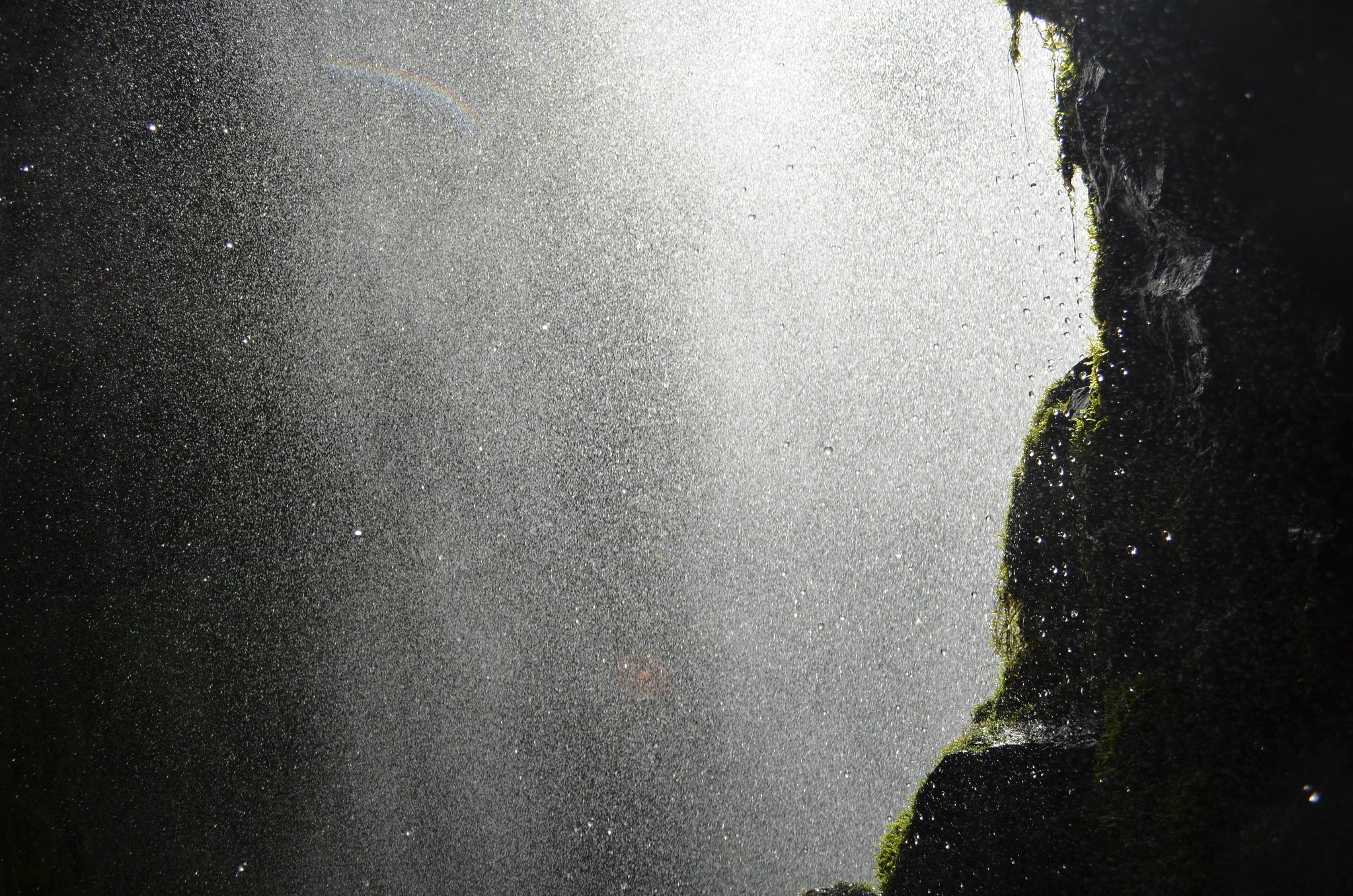 After 7.5 miles of walking, the mist billowing out from either side of the falls was downright refreshing. And passing through the tunnel behind the falls (you can see where the name comes from) wasn’t a let-down, either. 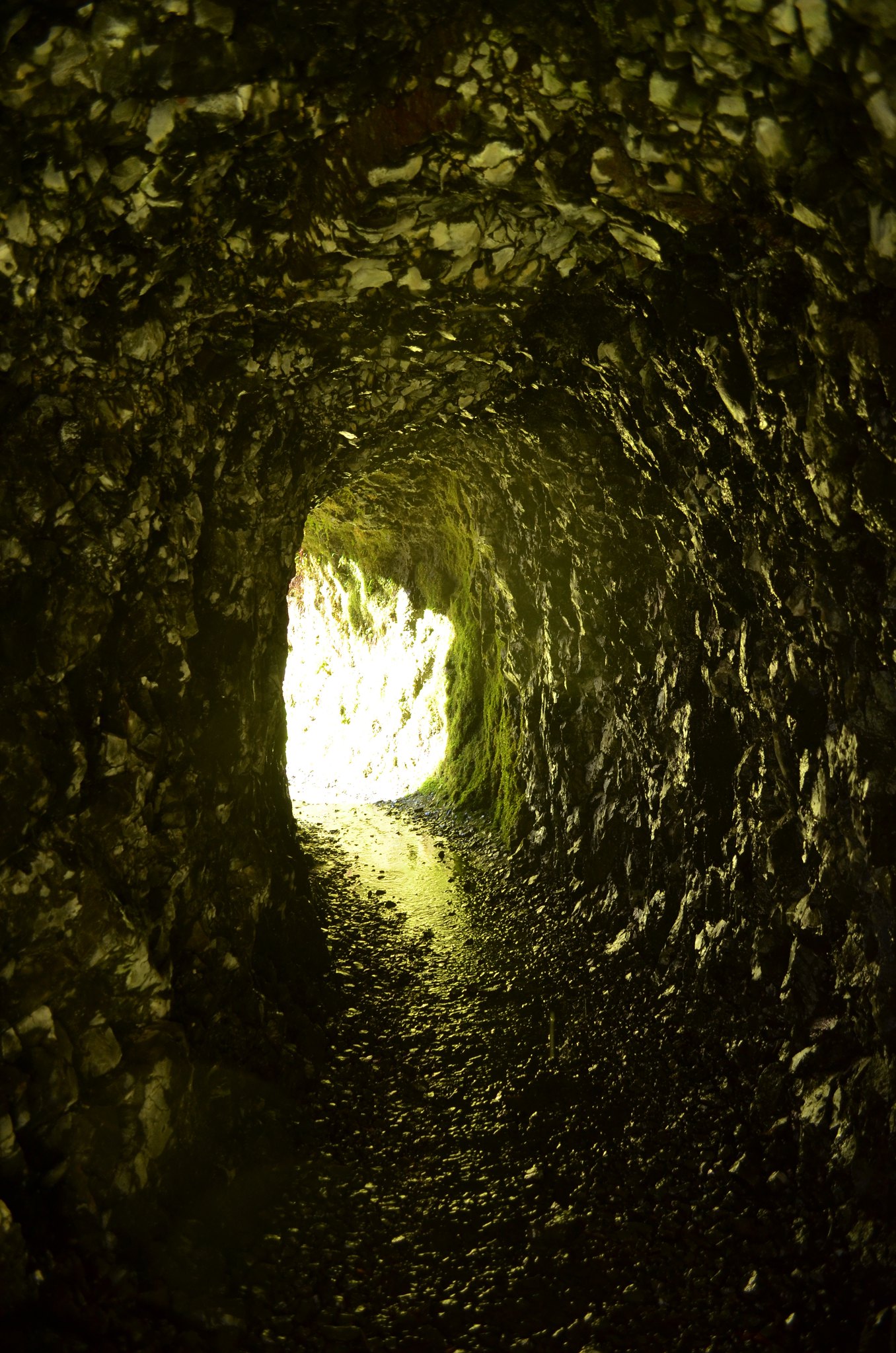 Luckily, in reading about the Tunnel Falls hike, I had discovered that Eagle Creek Falls lay only 1/4 mile further down the trail. These falls were more conventionally beautiful, but still nothing to scoff at. They were also quieter and a good place to eat lunch. 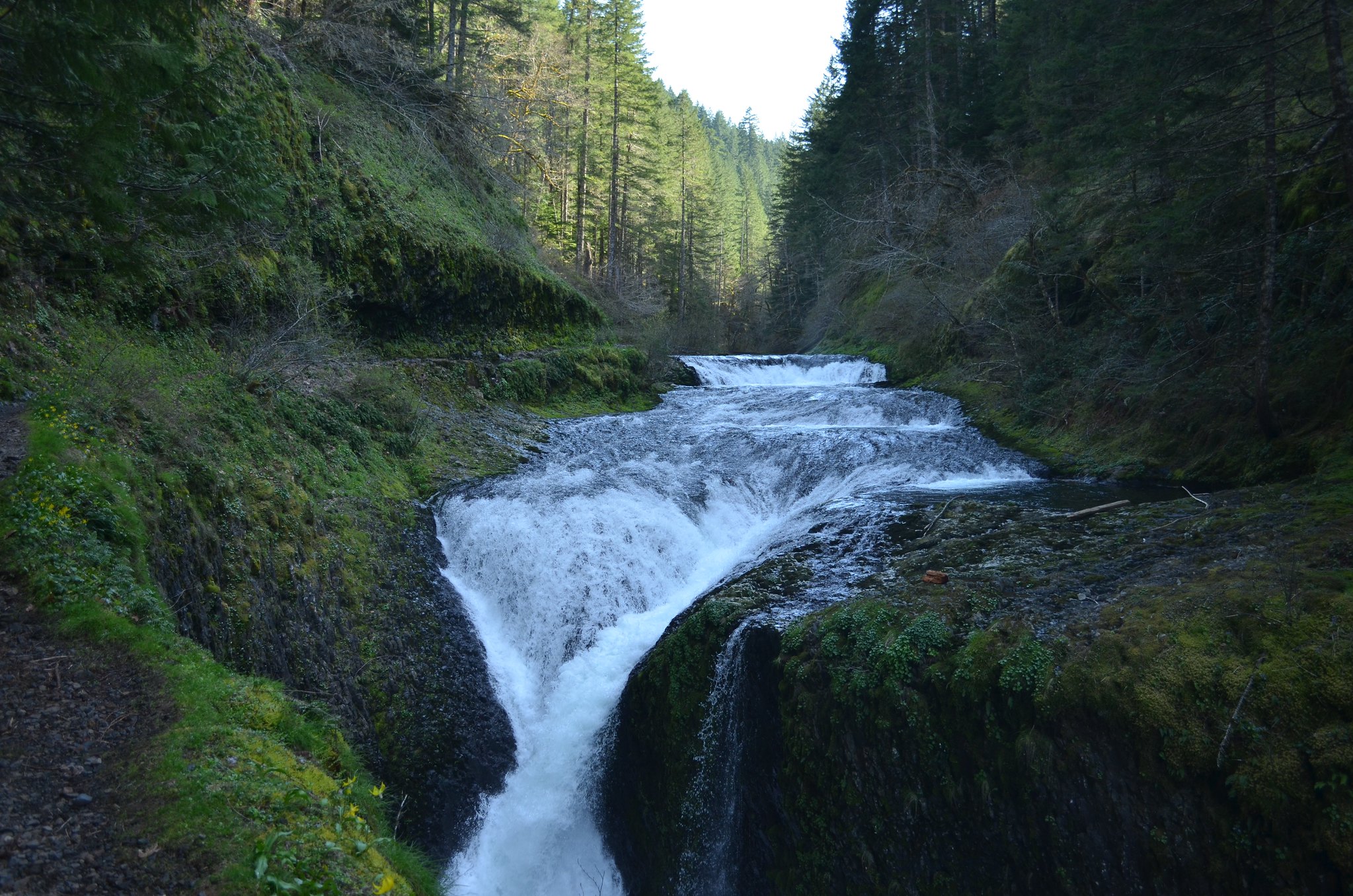 Any time you want to feel insignificant, just spend some time around waterfalls. 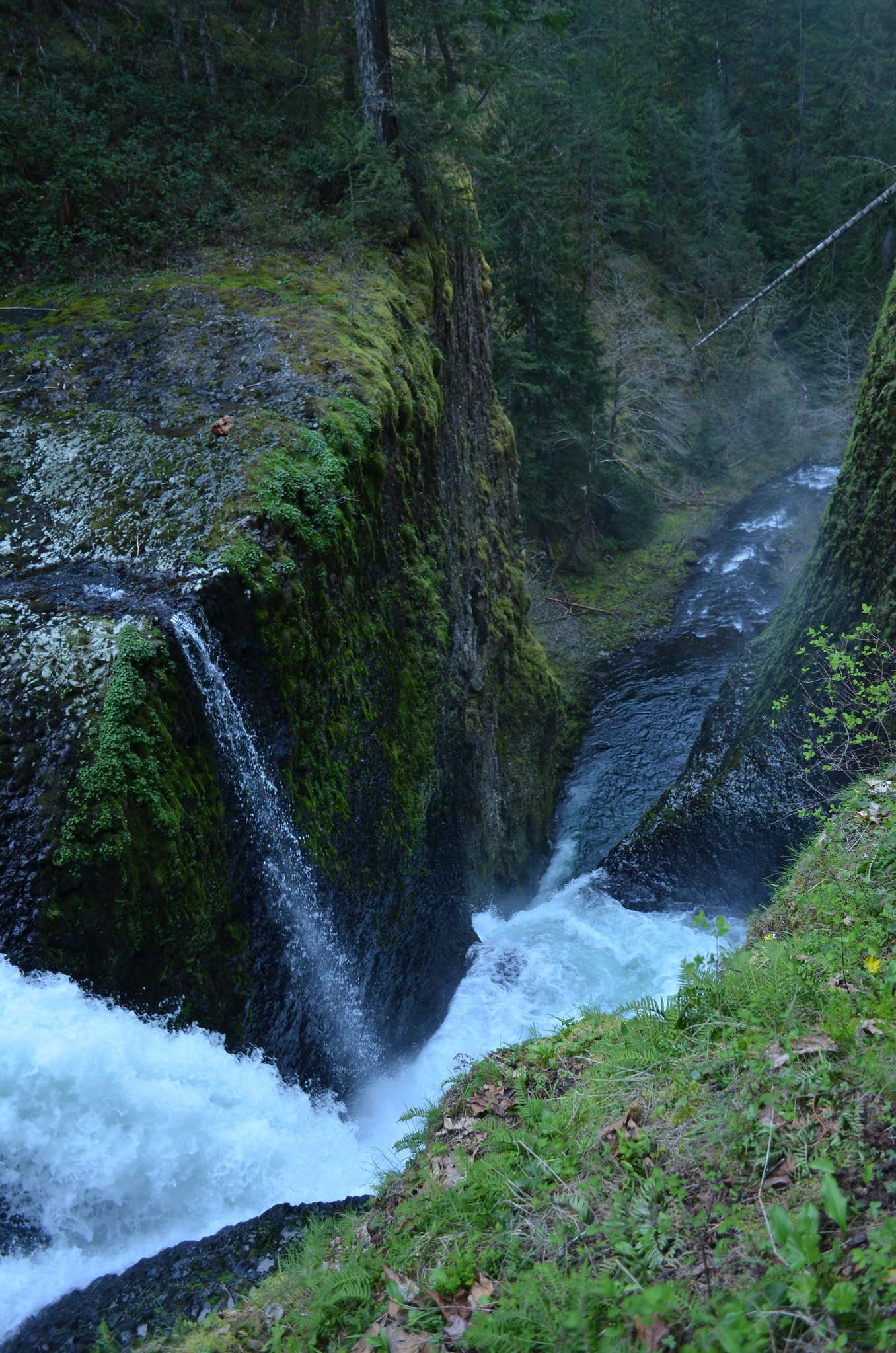 After our food break (always necessary when hiking, as your blood sugar may drop dramatically, causing moodiness and disagreements about whose pack is heavier), we turned back around and marveled at Tunnel Falls some more. 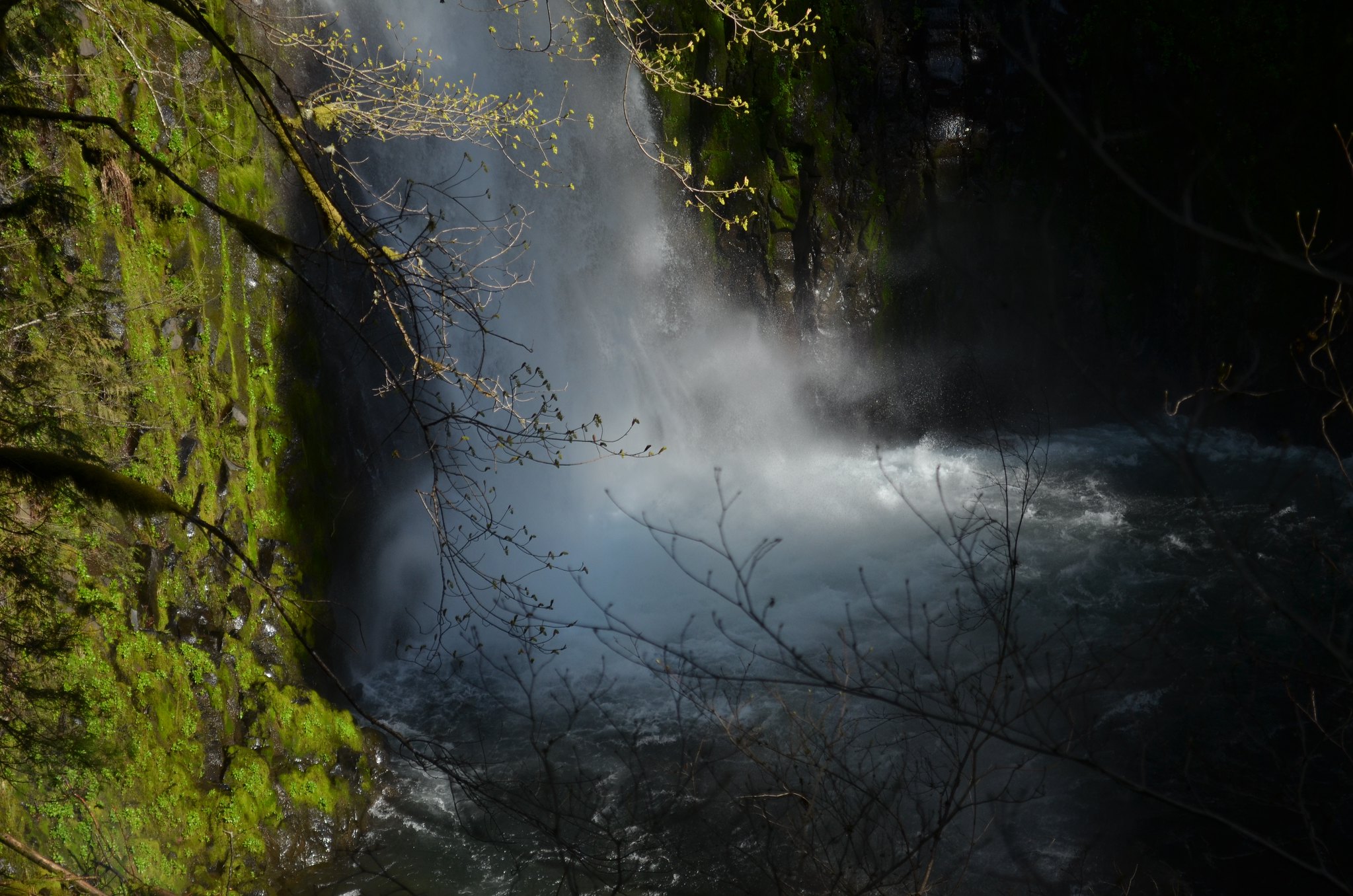 As always, the return trip seemed quicker, and we realized, much to our surprise, that no one had passed us during the hike. I mean, when we stopped to eat or paused to take a photo of the busted bridge, sure. But not when we were actively walking. We couldn’t believe it; Kiwis of all ages passed us regularly in New Zealand. Slightly-below-average fitness in New Zealand = above average fitness in America. In total, it took us six hours to complete the Tunnel Halls hike.

At the end of the hike, with the sun setting in the Columbia River Gorge and not thrilled by the idea of driving back to Portland only to fall asleep and go to work the next day, we drove down to the remarkably pretty town of Cascade Locks, where we lingered until dusk. 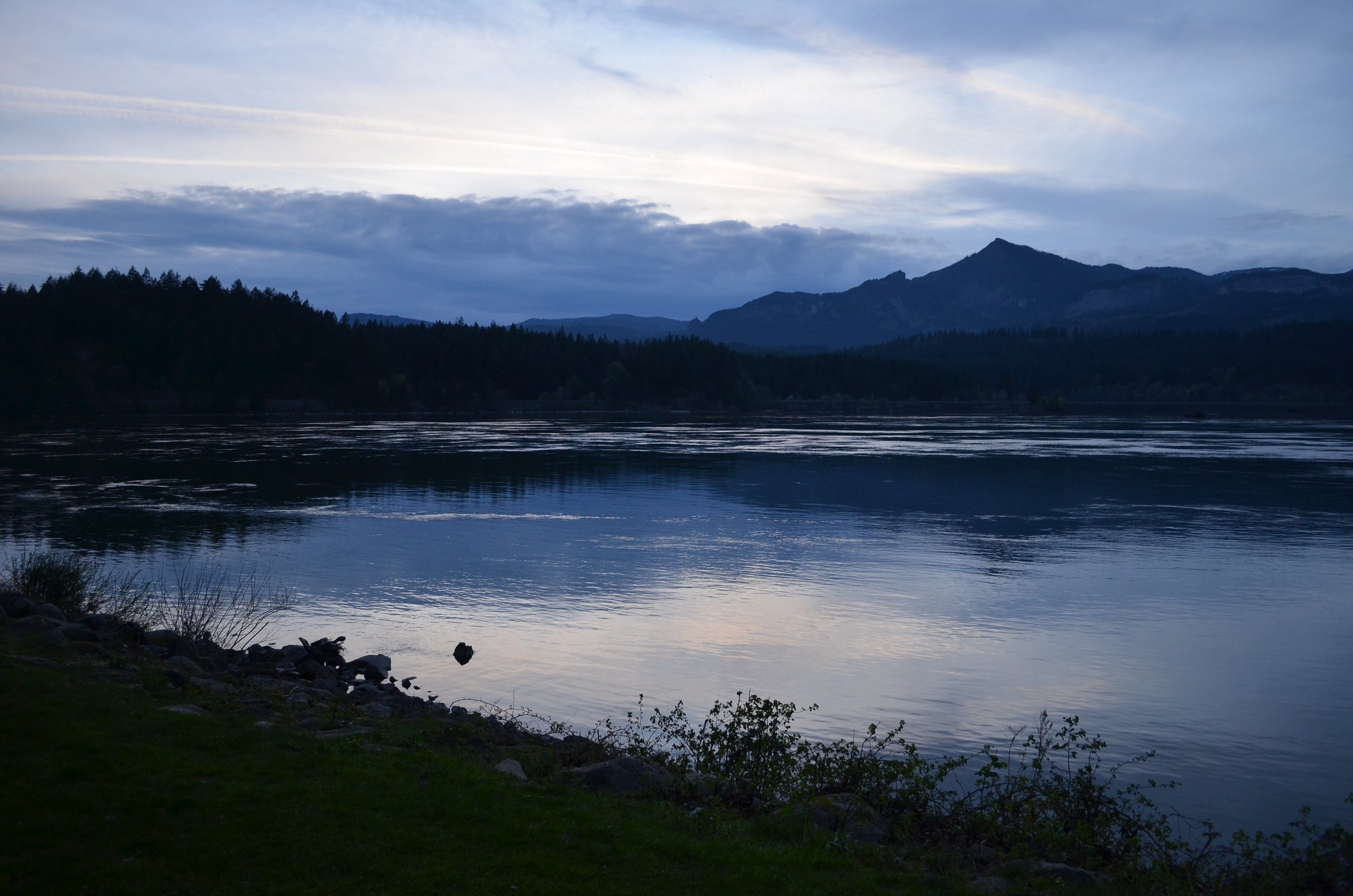 But return we did, sated for the time being, and full of hiking schemes for the future.

5 thoughts on “Hike to Tunnel Falls”