We smelled Rotorua before we saw it. Driving up the Thermal Explorer Highway, plumes of yellow-gray vapor intermittently bubbling up from either side of the road, we had no idea, even then, of the sulphuric assault that was soon to overwhelm our senses. 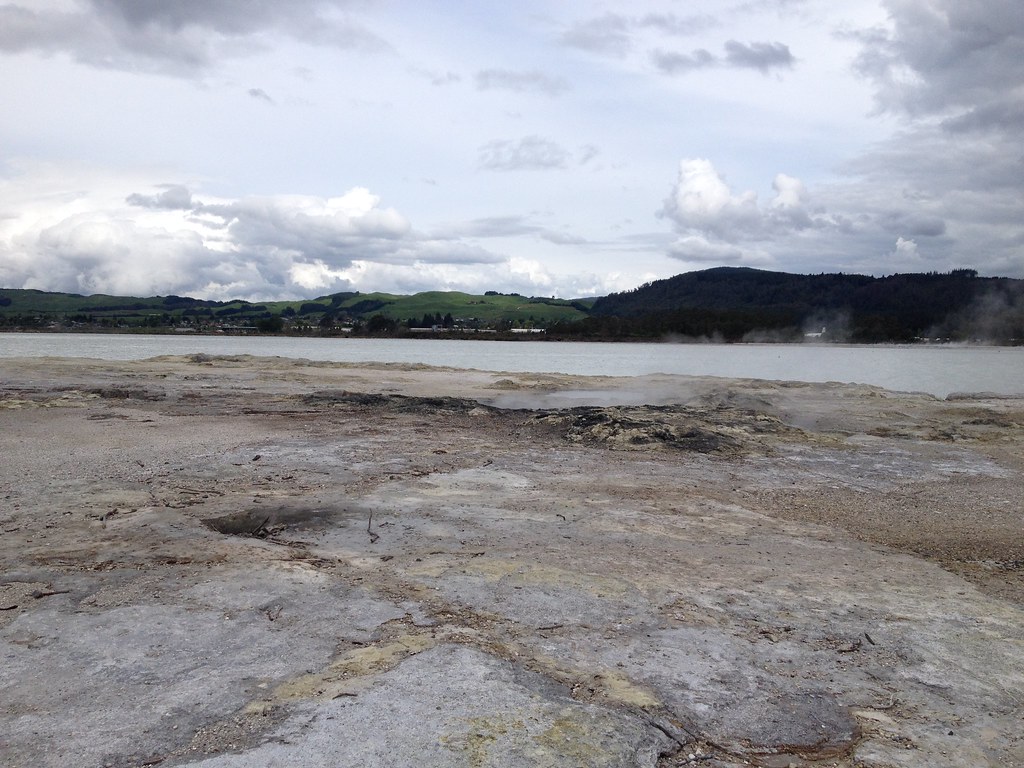 Imagine buying a dozen eggs, then forgetting them in the back of the cupboard. Imagine finding them three months later, opening the carton in horror, inhaling sharply in spite of yourself, and then, as if in slow motion, dropping the eggs on the ground as the powerful smell invades your nostrils. Imagine the eggs breaking. Yellow pus, white-gray ooze, and jagged eggshells strewn in viscous streaks across the floor. Imagine the scent filling your kitchen, your house, your yard, your street, your neighborhood. Imagine living in that smell forever. That, my friends, is Rotorua. 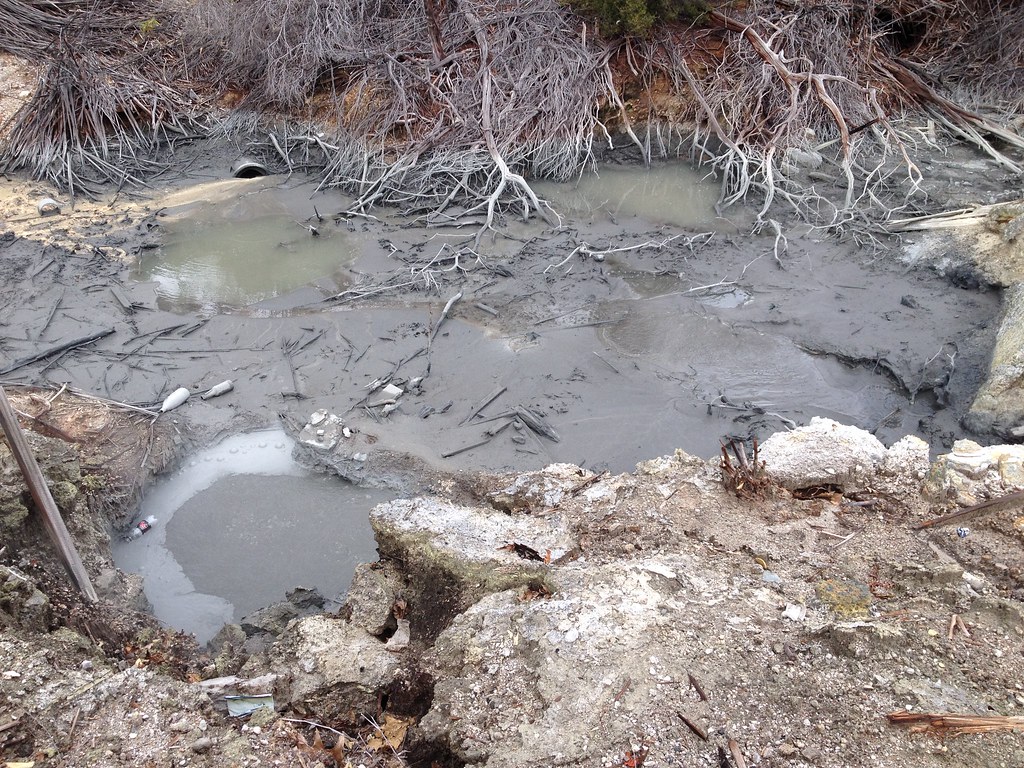 We parked our car and stumbled, half-blind and nauseated, through the beautiful and pungent Government Gardens, passing bubbling mud pools, steaming ponds, and yellow-tinged streams, to reach our destination, the ill-fated Sulphur Point. 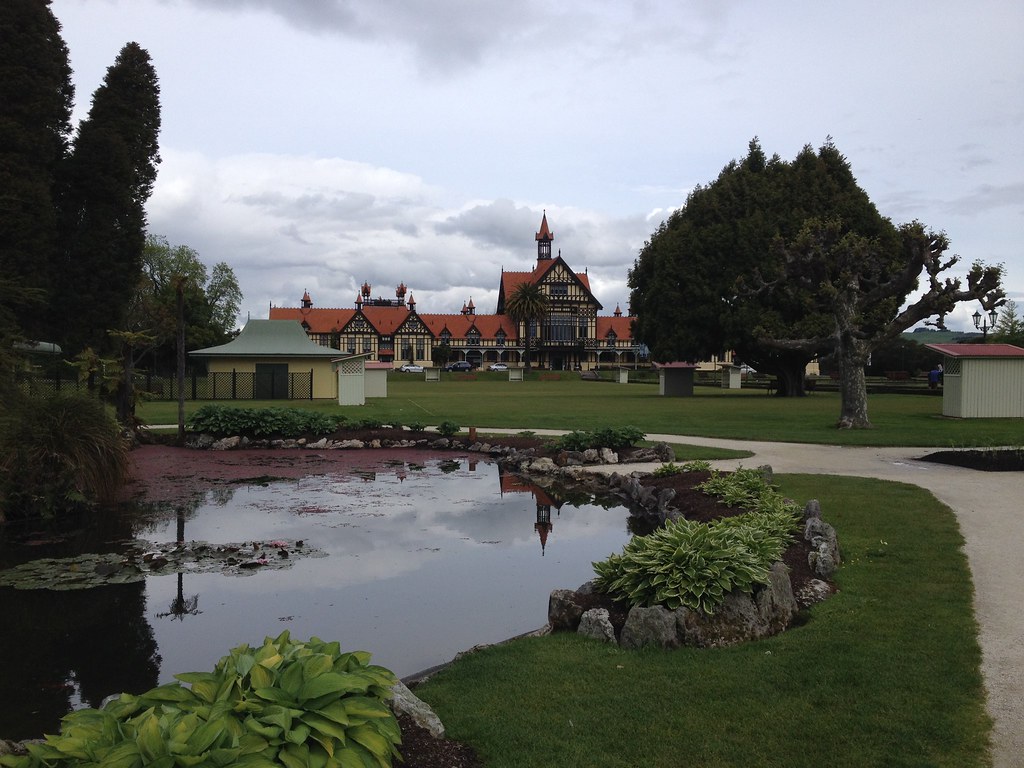 We marveled at the stately Museum of Art and History; who, we wondered, were the intrepid individuals who had braved stench and sulphuric vapor to erect a monument in this doomed domain? 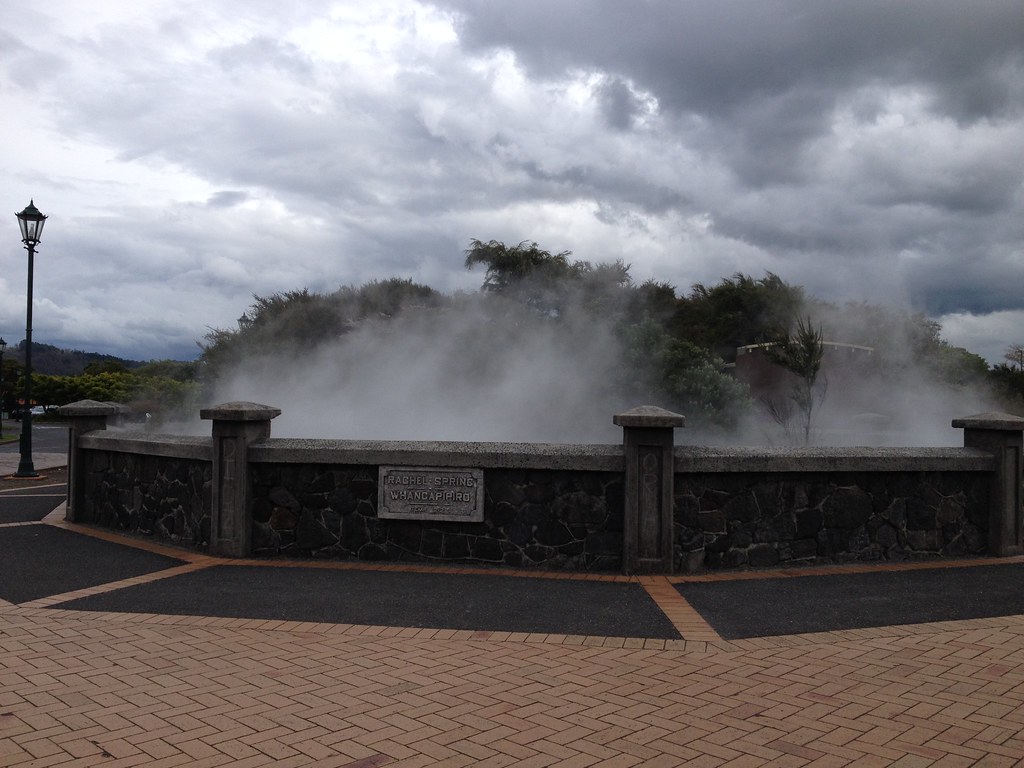 Other unfortunate tourists like ourselves took photos of the malodorous plumes and sickening pools, the dramatic and cough-inducing features of a raw geothermic landscape. We even spotted two poor, lost souls wandering among the squirming gray soil of Sulphur Bay, heedless of the numerous warning signs; would they make it out alive, we wondered? Or had the fumes already taken them? And, more frighteningly, would this happen to us? 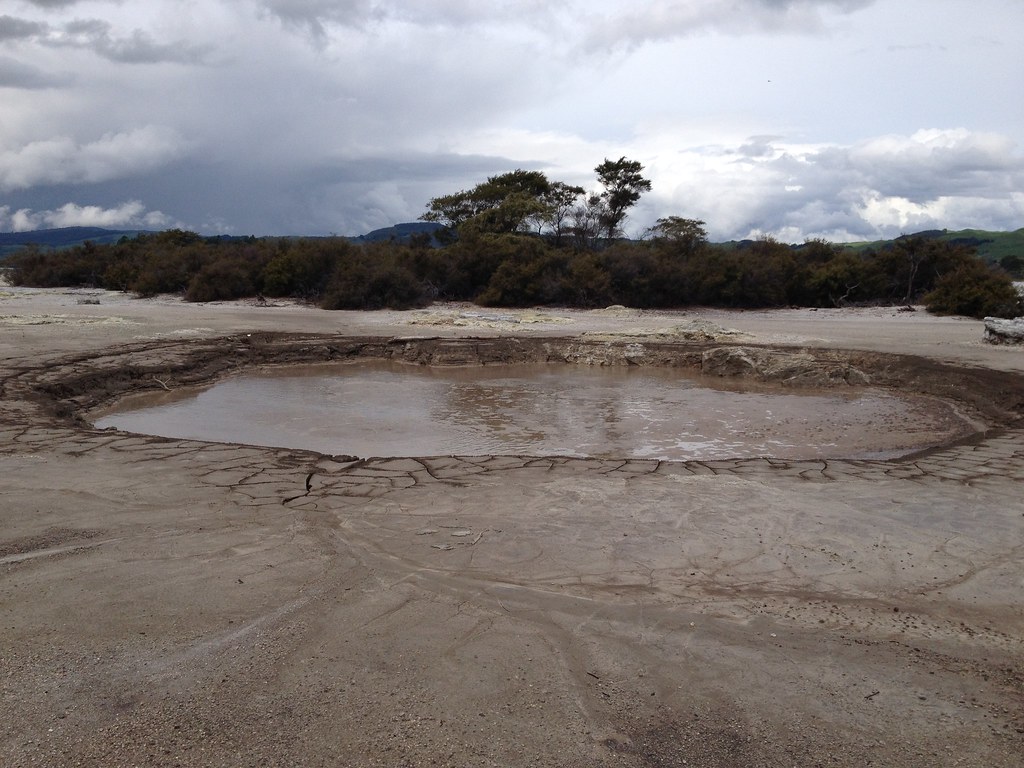 Against our better judgement, we followed a rickety boardwalk to Camerons laughing gas pool, where daft Europeans of lore got themselves so drunk on hydrogen sulphide and carbon dioxide that they forgot they had willingly lowered themselves into a pit of stinking mud. 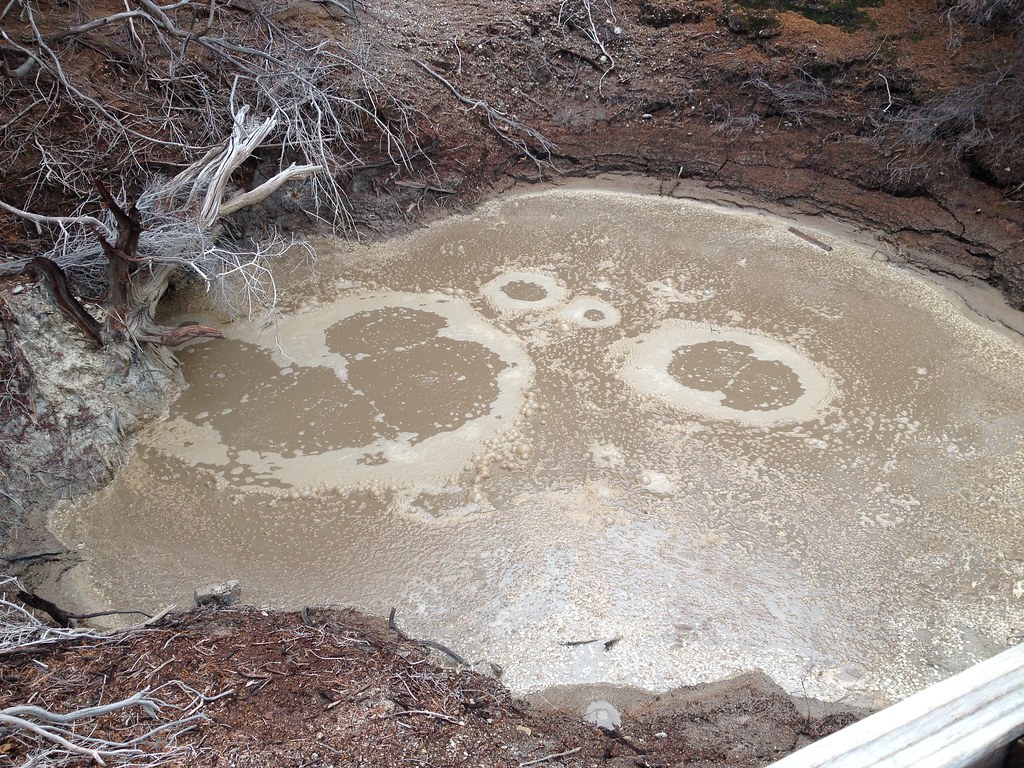 Even more tragic was the Coffee Pot, a boiling mess of sin and sulphur. Europeans swore the dark liquid had healing properties, but all it really did was tint the skin a light brown. Then again, these were colonists. What more could you expect? 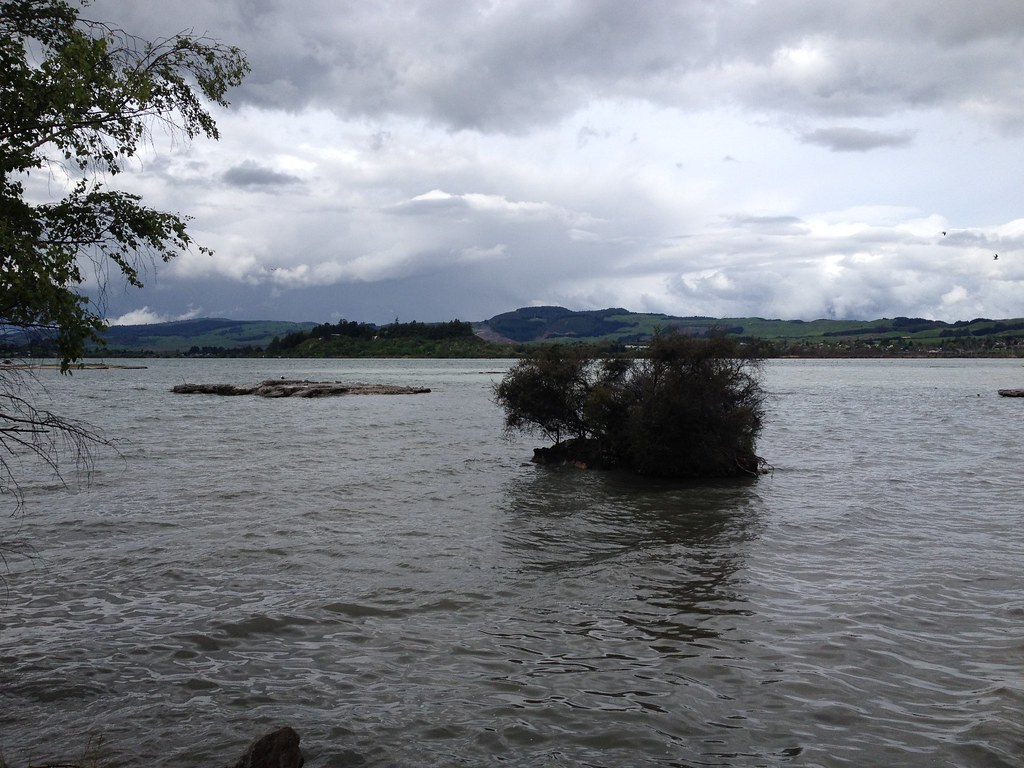 We gasped anew, holding our shirt collars over our faces, as we finally reached the picturesque end of the boardwalk, where the ever-pervasive stench had followed us. Too disgusted and demoralized to continue, we turned back toward our car, declaring the expedition over. Once we returned to town, we made the masochist choice to order eggs at Fat Dog cafe. Clearly, the sulphur had done us in. Driving back, we bemoaned our trip, longing for a nice, clear, clean hot pool with no gray-brown mud to speak of. Somehow, through divine intervention, we learned of The Bridge, aka The Secret Spot, aka Hot and Cold, aka Waiotapu Stream. 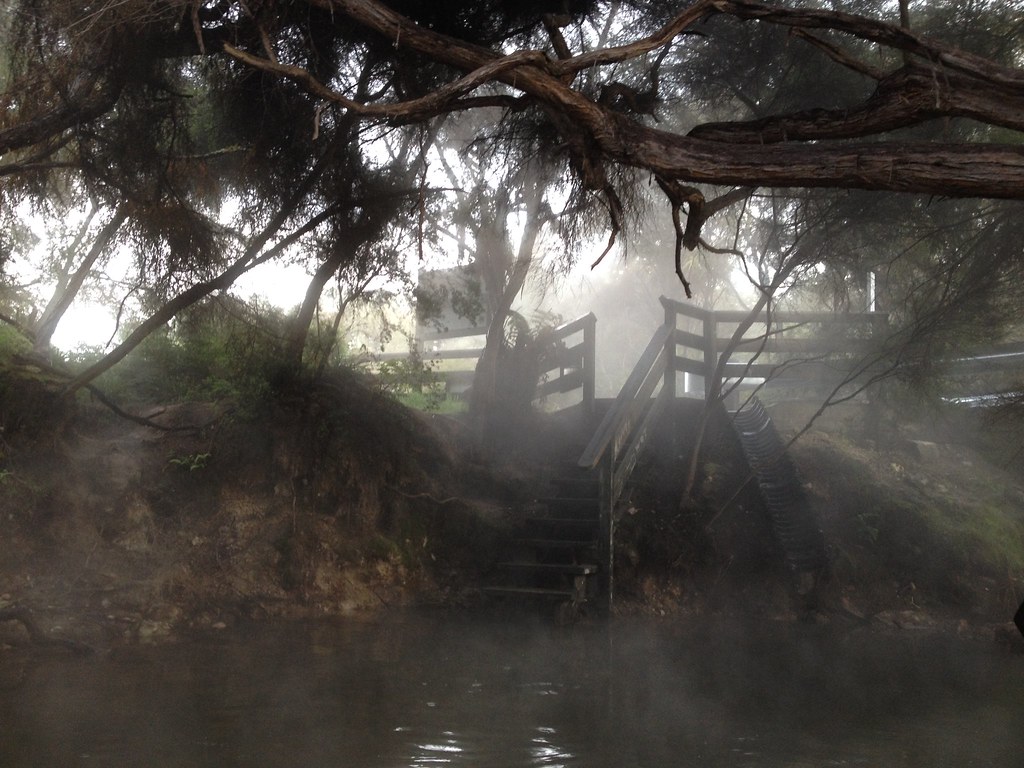 Apart from a deadly amoeba that would crawl inside your ears and burrow itself in your brain if you made the mistake of dunking your head in the water, The Secret Spot was more than enjoyable. Yes, the area still smelled of sulphur. Yes, the water was so hot that we sometimes rose, gasping, clutching at the cool evening air. Maybe those Europeans were onto something after all. Or maybe we had simply been done in by too many eggs and too much sulphur. We, quite literally, had the vapors. 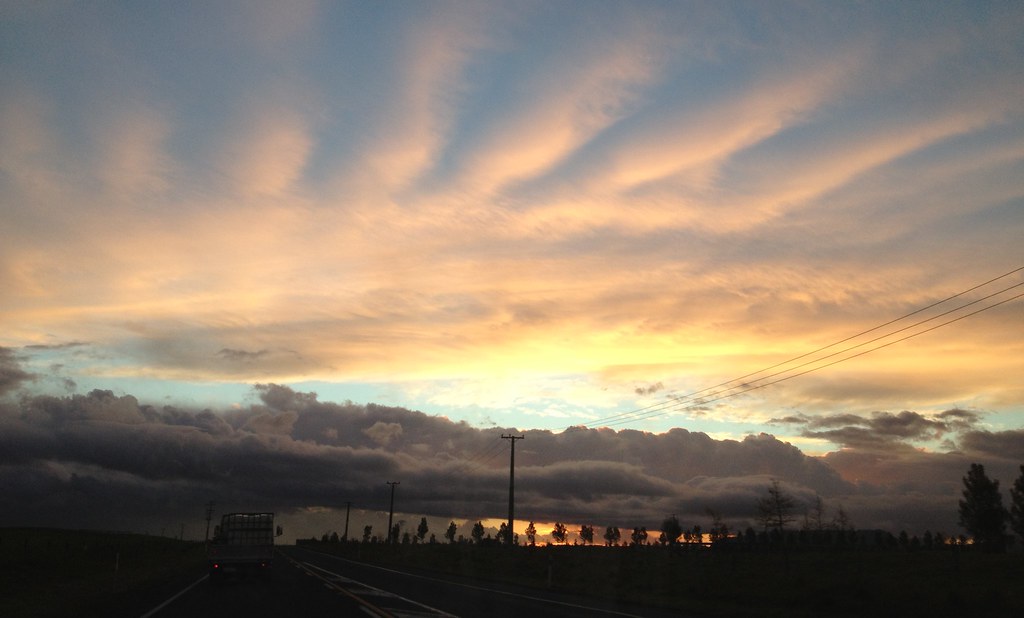 Driving back to Taupo along the Thermal Explorer Highway, we witnessed a glorious sunset that, somehow, was the perfect end to a bizarre day. Sunset photo by G. Others, me.