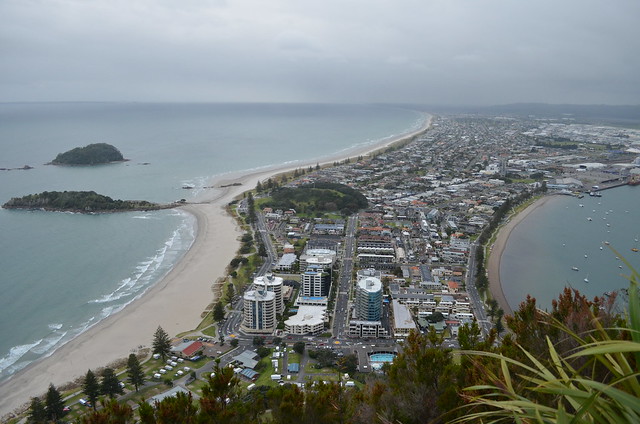 Now that we’re well past the halfway mark of our year-long exploration of New Zealand, I’ve reminded myself how useful it is to document the details of a major trip. And so, although it’s been nearly four months since I described our Pinnacles hike on the Coromandel peninsula, I’m going to pick up right where I left off, in late October on the North Island.

From the Coromandel peninsula, we drove south and slightly east over a series of truly terrible, topsy-turvy roads that produced feelings of nausea even in this iron-stomached sometimes-Texan. We finally made it to Mount Maunganui, an adorable oceanside town embedded within the larger city of Tauranga, in the scenic Bay of Plenty. There, we booked a room, as ever, through AirBnb with a young, friendly, professional newlywed couple. They seemed somewhat dissatisfied about their current state of living and were nostalgic about the extended period of time they’d spent in Africa (Kenya, I think it was). As our female host remarked, Maunganui is jokingly referred to as “full of newlyweds and half-deads.” 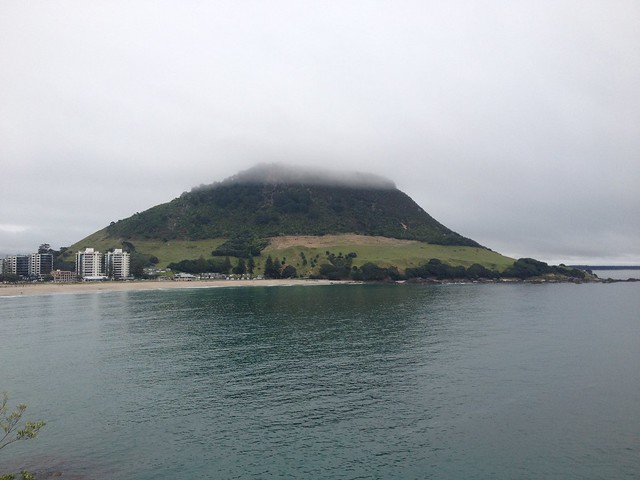 Nonetheless, the town of Maunganui had a cute, young, and slightly hipster-ish vibe, as promoted by the collection of small shops and trendy restaurants and bars along its main street. Our first night there, we drove over to the historic village in Tauranga to attend an outdoor screening of Amelie, which is always — always — a charming film to watch, especially seated on the grass with soft tacos in hand.

Mount Maunganui is situated on the tip of a peninsula and surrounded on all sides by ocean. The Mount, from which Maunganui takes its name, is visible from all vantage points. On foggy days, a layer of soft white cloud obscures its apex.

It’s strange to look back at these photos, which were taken in October, because they seem so gray and dark. Summer in New Zealand was characterized by bright blue and mostly cloudless skies, and the air itself seemed brighter. Many of the Kiwis we talked to throughout September, October, and November spoke of summer in loving terms, and told us that everything was better in the warm season. “Just wait until summer,” they’d say. When it finally arrived, one abrupt day in late December, it was as glorious as promised. But it ended all too soon, with cool winds blowing in the morning and evening hours, and the standard chilly temperatures became everyday life again. 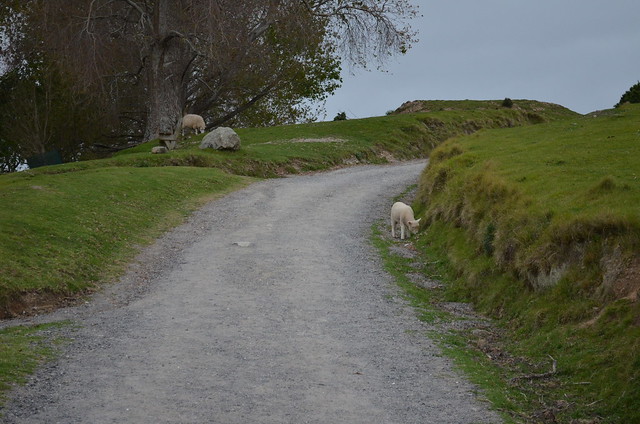 Climbing the Mount is one of the most obvious things to do in the town, and many residents use it as an exercise space, running and walking along the many paths scattered among its slopes. It also doubles as a emergency gathering point in the event of a tsunami wave. Even though the mountain is very much located in the middle of an urban area, Kiwis have made sure to take advantage of its grassy slopes for grazing. Like the cows on Mount Mangere in south Auckland, sheep were the primary residents of the Mount itself, and we came into very close contact on our way up. 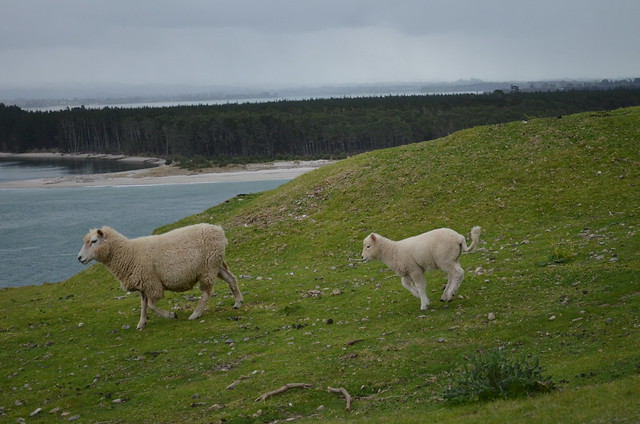 Lambing season in New Zealand falls from late July through September, so our October walk up the Mount was the perfect time to see many adorable little lambs frolicking about, baaing loudly and munching on whatever they could find. 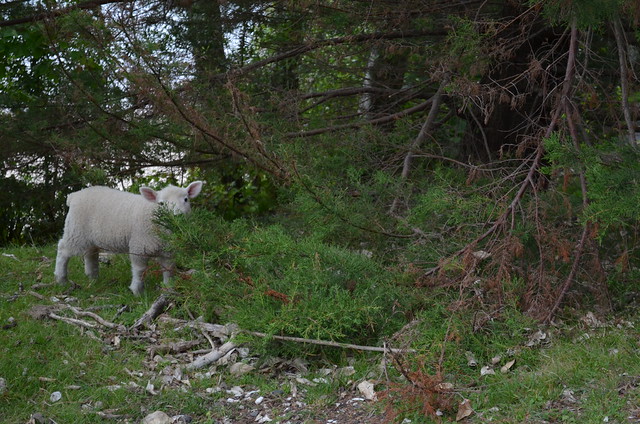 We weren’t able to touch a lamb – indeed, signs posted at the base of the mountain asked visitors not to disturb the sheep – partly because they are naturally skittish, but also because the female ewes were constantly on guard. 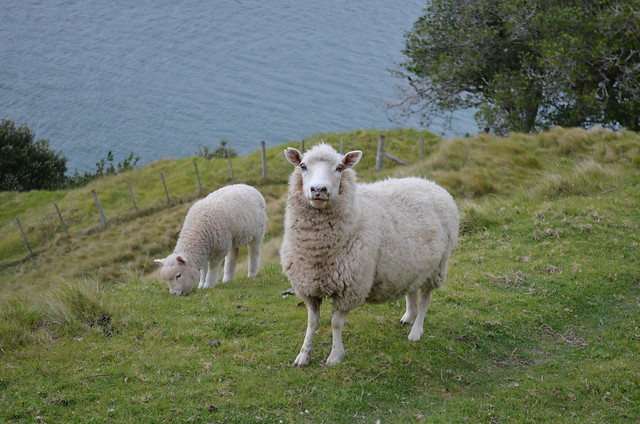 It was there that Greg was able to take possibly one of the most adorable photos of all time. 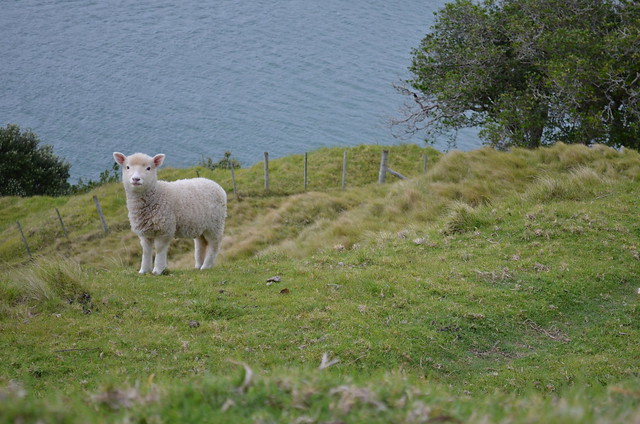 The way to the top afforded many lovely views of the surrounding area, despite the foggy weather. To our left we could see Matakana Island, a seemingly endless expanse filled with pine trees. The dark green made for a gorgeous contrast against the gray-blue water. 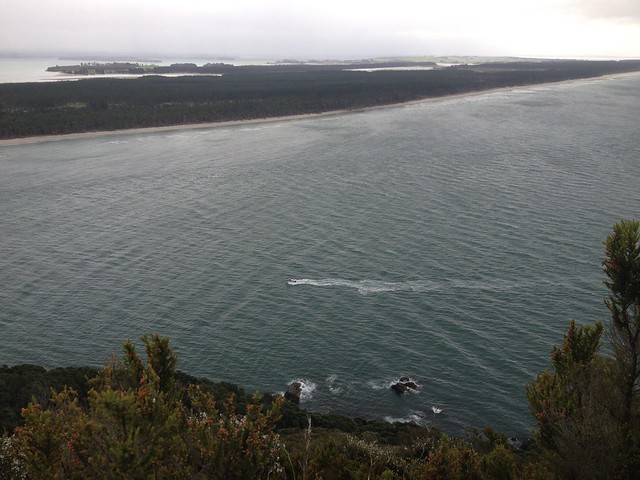 Eventually, after much meandering and delighted appraisals of the sheep, we made it to the top and looked down upon the little town below (also see top photo). The little island you see there is Moturiki Island, a bird sanctuary populated by an extremely violent and cacophonous colony of seagulls (among other less obnoxious birds). At low tide, you can walk straight onto the island from the beach. 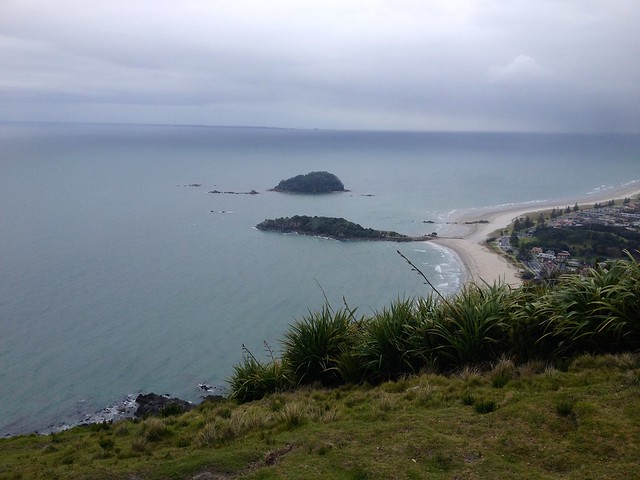 The top of Mount Maunganui, like the rest of the mountain, is peppered with small footpaths, and we happily wandered among them, taking photos all the while. 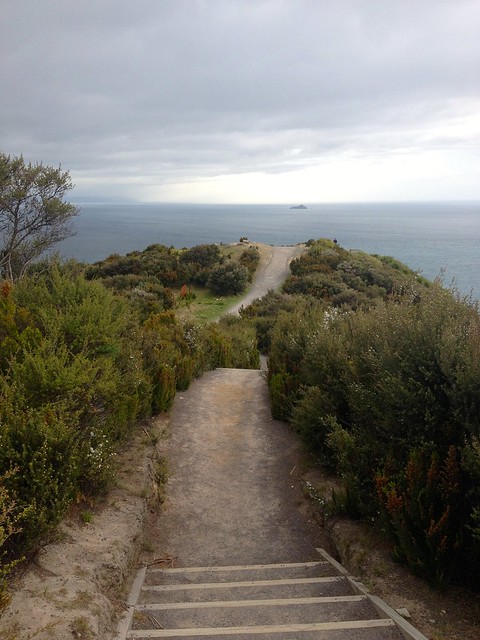 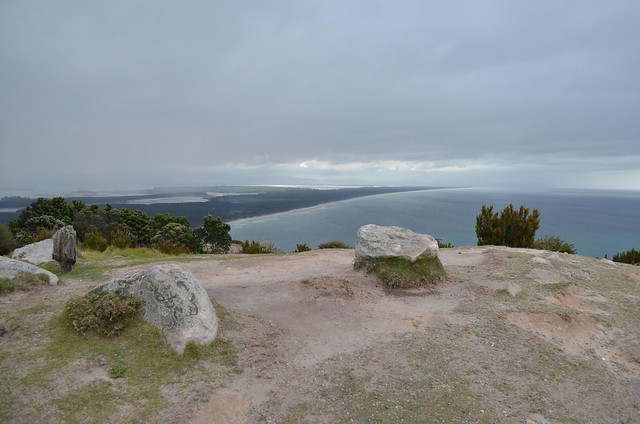 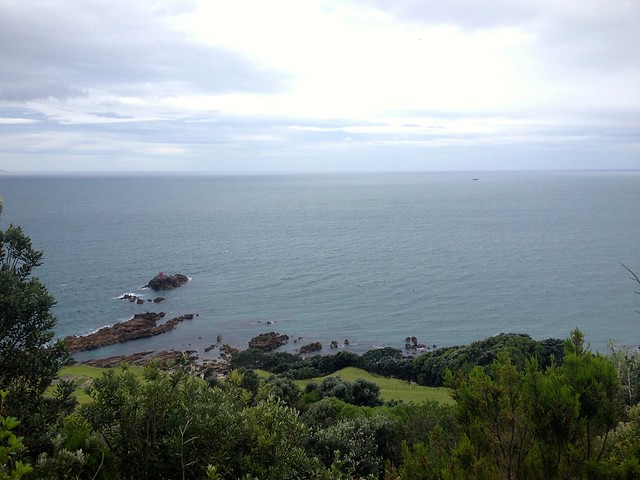 Eventually, after drinking in the views and getting our photo taken by a nice German tourist, we wandered down the other side of the mountain where, of course, there were more sheep. Our hosts had told us to visit the Mount Hot Pools at — you guessed it — the base of the Mount, and even though our “hike” had barely lasted more than two hours, we were happy to take up their suggestion. 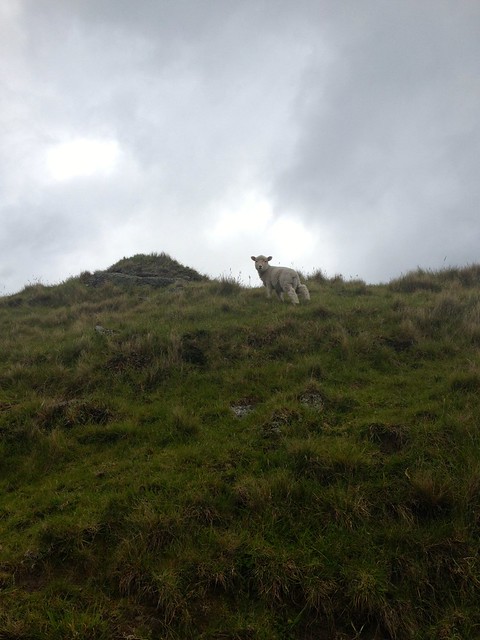 We ended the day with beers and chips at a pub, which was an average experience. HOWEVER, one of our nights in Maunganui involved an absolutely fantastic buy one, get one free meal at Barrio Brothers. Truly outstanding Mexican food, a treat that we definitely didn’t expect to find in New Zealand! If you’re passing through Maunganui, I can’t recommend going to Barrio Brothers enough.

We only spent four nights in Mount Maunganui, but it was a cute town that we’re glad to have seen. We also didn’t stay with all that many young professional couples via AirBnb, so it was interesting to see how our hosts in Maunganui were ambivalent about their life in New Zealand and eager to travel elsewhere, a theme that was to become increasingly common as we moved through the country. On our final day in Maunganui, we drove an hour east to Matamata to visit the Hobbiton set… but that deserves its own post entirely!

Photo credits: Majority by G., with a few exceptions; the Mount in fog, Matakana Island, Moturiki Island, footpaths, looking east, and the last lamb were taken by me.

11 thoughts on “Sheep and Mount Maunganui”