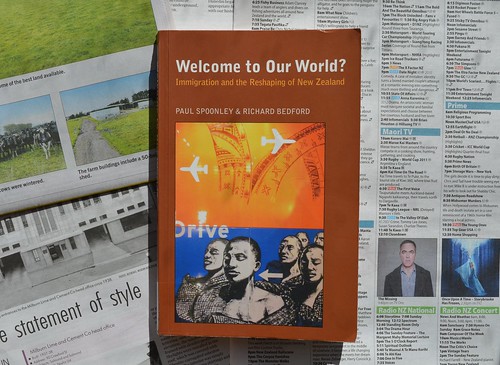 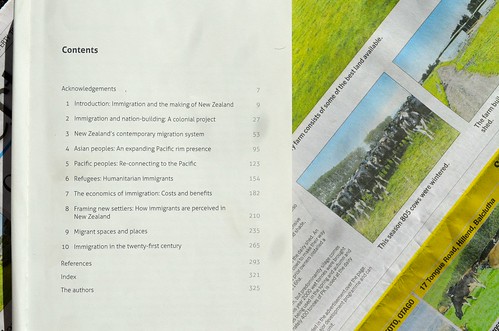 Spoonley and Bedford’s portrayal of New Zealand is remarkably balanced. They do not fully condemn New Zealand for its problematic “preferred country” (i.e., white) immigration system that persisted until the mid-late 1980s, but instead contextualize New Zealand’s immigration history in relation to its first-world peers — i.e., Canada, Australia, the United States, and Britain. At the same time, they do not let patriotic loyalty or nationalist sentiments preclude them from critically detailing New Zealand’s racist and/or xenophobic treatment of immigrants, from fearmongering surrounding Pacific Island immigrants in the 1960s and 1970s, to the public concern over an “Asian invasion” in the mid-1990s, to the ongoing racialised hierarchy that persists in New Zealand, with Pacific Islanders at the bottom, those of Asian descent in the middle, and white immigrants from “preferred” countries (U.S., Britain, South Africa, etc.) at the top.

Appropriately, Spoonley and Bedford discuss New Zealand’s immigration policies as they compare to other English-speaking, first-world nations — namely, the United States, Canada, Britain, and Australia. While some might consider it an oversight not to consider the immigration policies of less-similar nations, the fact is that by combining these five countries, Spoonley and Bedford are able to discuss immigration patterns typical of so-called “desirable” immigrant destinations. These immigration flows, which are dominated by “economic migrants” admitted because of their skills and education, are distinguished by unique problems. For example, Spoonley and Bedford describe how the shift from a “preferred country” policy of immigration, which privileged British and other white Europeans from the early 1800s until the mid-1980s, to a points-based system introduced in 1991 that emphasized skills and work experience — and subsequently lead to increasing numbers of Indian, Chinese, and Korean immigrants — revealed racial and xenophobic tendencies among the general population. Although immigrants are generally perceived as having a positive impact on the New Zealand economy, the shift from a largely white/British immigrant population to an increasingly Chinese, Korean, Indian, and other Asian immigrant pool has required New Zealanders to accept that their country is primarily an Asian/South Pacific one, and not a miniaturized “Britain in the south seas.” Furthermore, although New Zealand (and Australia and Canada) admit immigrants based on their potential to positively impact the New Zealand economy, many immigrants from Asian countries face difficulties finding suitable employment at a level commensurate with their skills and experience. This represents one of, if not the, primary policy issue relating to immigration in New Zealand today.

Perhaps counterintuitively, one of the advantages of New Zealand’s historic “preferred country” immigration policy is the absence of a strong sense of patriotism or nationalism. As Spoonley and Bedord explain, because New Zealanders were technically British citizens until 1948, there was no need to convince large numbers of disparate immigrants to adopt a “new” nationality, in sharp contrast to other countries like the United States which has been dominated by a melting pot ideology. Even today, the thresholds to permanent residence and citizenship in New Zealand are low compared to similar countries, and there is not a strong expectation that immigrants should hastily adopt the national norms and pastimes of their new home. Furthermore, New Zealand’s distinctions between citizens and permanent residents are relatively relaxed, with permanent residents having access to state-funded health care and other social benefits, in addition to the right to vote in national elections.

My criticisms of the book, which are few, are more or less identical to those expressed by Jane Yeonjae Lee of the Unitersity of Auckland. In a review published in New Zealand Geographer, she remarked that:

This book provides a comprehensive overview of New Zealand’s immigration history, policy development and impacts, and migration system. However, the book does not move beyond a general overview of various matters of immigration. Hence, it would not be appropriate for someone who is looking for a theoretically engaging book. (p. 80; link to source).

Published in 2012, Welcome to Our World? is especially useful — as are most academic texts — because of its extensive bibliography, which covers just about every aspect related to immigration that New Zealand scholars and academics have pursued. As such, Spoonley and Bedford point out areas in need of further research (e.g., children of immigrants; transnational immigration patterns and circular migration; and examining New Zealand’s immigration inflow and outflow in conjunction with that of Australia, paying special attention to the Trans-Tasman Travel Arrangement). With Welcome to Our World?, Spoonley and Bedford have accomplished something that is still relatively rare for academic texts: their detailed account of New Zealand’s immigration landscape is both appropriate for (educated) novices as well as scholars with decades of experience in the field. It is critical reading both for those wanting to ensure that their understanding of the literature is sufficiently broad, as well as undergraduates learning about New Zealand’s immigration history and policies for the first time.

Overall rating: 4/5 stars — Ideal both for undergraduate students seeking a general introduction to immigration in New Zealand, as well as graduate students and academics eager for a comprehensive resource containing a semi-specialized overview of pertinent issues and the relevant literature.

P.S. I realize that this review is a somewhat unusual one for my blog, as I usually stick to fictional texts. I’m hoping to study something related to immigration at the graduate level here in New Zealand. When I have a better idea of whether I’ll be able to do that, I’m potentially planning to create a second, separate blog with resources on that subject. But, for now, it’s useful for me to be able to record my impressions of what I’m reading here on Literary Vittles.