*Spoilers throughout this post. Since the book has been in print for over 200 years, I figure there’s nothing I could possibly say about it that hasn’t already been said many times before.

Having read and adored Pride and Prejudice, and having slogged through the long-winded Sense and Sensibility, I was cautiously hopeful about my third Austen novel. Although it more closely resembles the latter, Mansfield Park was, for the most part, still an enjoyable read — especially after the string of unimpressive books to which I subjected myself.

The story begins with three sisters. The eldest, a beauty, marries extraordinarily well and becomes the pampered wife of baron Sir Thomas Bertram, owner of Mansfield Park. The middle sister, appropriately named Miss Ward, marries a parson (in this case, an Anglican priest) and becomes Mrs. Norris. Since parsons earn very little, Mr. and Mrs. Norris live off of the generosity of Lady Bertram’s husband and take up permanent residence at Mansfield Park. The third and final sister fares poorly. She humiliates herself by marrying a marine lieutenant, becomes Mrs. Price, and promptly produces nine children. Horrified by their sister’s decision, Lady Bertram and Mrs. Norris decide that it would be most generous of Sir Thomas Bertram to offer to raise Mrs. Price’s eldest daughter, thus relieving her of one mouth to feed. And so, at the age of 10, tenderhearted and chronically shy Fanny Price arrives at Mansfield Park. 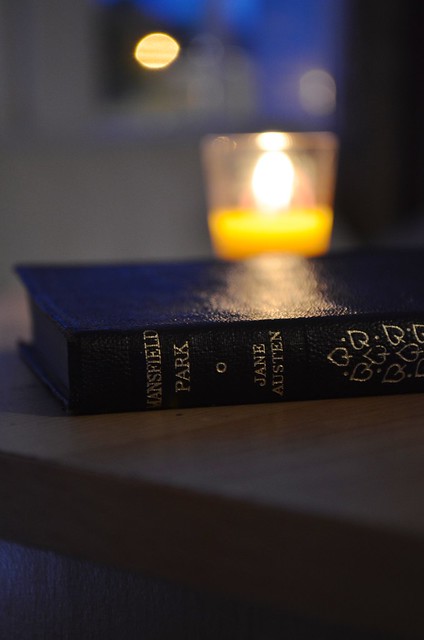 The story of Fanny’s upbringing resembles an upper-class version of Cinderella, where her two older cousins, Julia and Maria, play her wicked stepsisters, and Mrs. Norris fills the role of the evil stepmother with ease. Fanny is seemingly as unlucky in life as she is in nomenclature. She is forced to live in the attic, while her cousins occupy large and decorated rooms; Mrs. Norris won’t let Fanny have a fire in her grate, despite her weak constitution; though easily tired by walking, Fanny is never given a horse of her own. These may seem like minute concerns, and to some extent, they are — especially in comparison to the type of life Fanny would have lead in her mother and father’s less-well-off home. But the impact of being raised as an afterthought, as irrevocably inferior to her cousins, does have a profound effect on Fanny.

‘There will be some difficulty in our way, Mrs. Norris,’ observed Sir Thomas, ‘as to the distinction proper to be made between the girls as they grow up: how to preserve in the minds of my daughters the consciousness of what they are, without making them think too lowly of their cousin; and how, without depressing her spirits too far, to make her remember that she is not a Miss Bertram… they cannot be equals. Their rank, fortune, rights, and expectations, will always be different.’ (p. 27)*

Anyone else raised in such an atmosphere would develop feelings of intense resentment, but Fanny has such a naturally gentle disposition that she feels only gratitude toward her uncle Bertram and other relatives. Mrs. Norris is especially fond of reminding Fanny just how worthless she is, but Fanny is so meek, and so afraid of appearing ungrateful, that she never dares to stand up for herself. It is only in her cousin Edmund that Fanny finds consolation; he is the first, and, for a long time, only resident of Mansfield Park who notices when Fanny is unhappy. 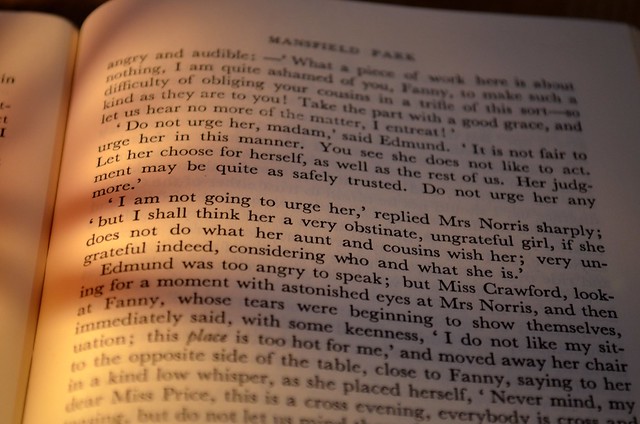 By the time she is 18, Fanny has evolved into a saint-like creature incapable of indiscretion, cruelty, or a single untoward thought. Her admirable qualities are thrown into sharp relief by the inferiority of her fellow characters. To heighten Fanny’s unimpeachable disposition, Austen surrounds her with an indolent aunt, a detached and dispassionate uncle, two vain and oblivious female cousins, and the downright malevolent Mrs. Norris. It’s a type of literary device, and it’s been used many times before, but I’m unsure whether it has a name. Unlikely though it may seem, I realized what Austen was doing after re-reading my college film professor’s exceptional review of Sofia Coppola’s Lost in Translation. His criticizes the film for relying on oversimplified characterization to make the movie seem more poignant than it is:

In short, Coppola insulates her depiction of Bob and Charlotte as earnest, delicate souls by making everyone else look pretty foolish. This strategy doesn’t violate any formal rules… but still, this is not the tactic of an especially mature or capacious spirit. In fact, it hedges the film’s bets considerably. Rather than simply background the other characters, Coppola actually foregrounds their cartoonish qualities and then wipes her hands of them. Maybe Lost in Translation isn’t the story of a special, soulful communion after all but the story of a desperate pair thrown into friendship because everyone else in the universe is a stooge or a harpy. (source)

I realize, of course, that Austen is a satirical writer, and that her novels are meant to be comedies of manners. But the satire is perhaps a little too sharp in Mansfield Park, to the detriment of the novel’s plausibility. Mrs. Norris, of course, is the most obvious example of a cartoonish character. Unlike Pride and Prejudice‘s Mrs. Bennet, who, though simpleminded, is far from cruel, or Sense and Sensibility‘s naive, but genuine, Marianne, Mrs. Norris is completely devoid of any redeeming qualities. Basically, she’s a massive bitch.

‘The nonsense and folly of people stepping out of their rank and trying to appear above themselves, makes me think it right to give you a hint, Fanny, now that you are going into company without any of us; and I do beseech and entreat you not to be putting yourself forward, and talking and giving your opinion as if you were one of your cousins… Remember, wherever you are, you must be the lowest and last’ (p. 187).

Mrs. Norris regards Fanny with unmitigated cruelty, and is a convenient, and too easily despised, creation. Just as Mrs. Norris’s shocking proclamations and outrageous suggestions reduce her to a caricature, so, too, is Fanny unrelentingly one-dimensional. Reading or learning about saint-like figures is rarely interesting, and Fanny lacks the complexity that Jane Austen herself embodied (an upper-class woman, encouraged not to draw attention to herself, who published all of her novels anonymously). Part of what made Pride and Prejudice so memorable was the shortcomings of its two protagonists, made explicit in the title itself. Fanny neither struggles with herself, since she is perfect by nature, nor with the world, since she is too polite to ever complain or effect change. Things happen to Fanny; she must simply wait for those surrounding her to come to their better senses. Passivity among women in 19th-century England may be forgiven, even expected, but what disappointed me the most was Austen’s praise for Fanny’s self-restraint. It is almost as though Austen wrote Mansfield Park as an exercise in self-improvement: by imagining and describing a character as perfect as Fanny Price, perhaps she, the writer, could bring herself closer to that ideal.

For these reasons, I found the ending of the novel quite disturbing. First, of course, there is the fact that Fanny married her first cousin, Edmund, thereby doubling the probability that her children would be born with birth defects. When your social circle is small, and primogeniture dictates how the family fortune must be distributed, I suppose that cousin marriage doesn’t seem so alarming. 19th-century English conventions aside, it is equally disturbing that Fanny would be willing to marry Edmund after being the primary witness, and confidante, of his infatuation with another woman. Only someone with very little pride, or no pride at all, could resign themselves to being someone’s second choice after hearing, in intricate detail, about their love for someone else. Austen makes it clear that Edmund is Fanny’s reward for a lifetime of restraint and propriety, and one could suppose that it was her intention to demonstrate that it was Fanny’s very lack of pride that ended up ensuring her happiness. But when one’s own sense of humility is based, as Fanny’s was, on an overwhelming sense of inferiority and undeservedness, then one has to question whether happiness, and a happy endings, are entirely lacking in self-respect.

Let me be clear: Mansfield Park is, without a doubt, still functionally well-written, furnished as it is by Austen’s ever-biting pen. Moments of outrageous humor, translated through 200 years of history and societal change, are still hilarious. It is endlessly entertaining, if worrying, to read about the exploits of Fanny’s family and associates, particularly when they engage in Shakespearean behavior à la A Midsummer Night’s Dream. In plausibility and poignancy, however, Mansfield Park is lacking. Fanny is a dissatisfying heroine not through her own faults (she has none), but rather through her distinct lack of complexity, and the story suffers as a result. In a rare moment of first-person narration, moments before she ends the book on an unrelentingly cheerful note, Austen reveals her motivations.

Let other pens dwell on guilt and misery. I quit such odious subjects as soon as I can, impatient to restore everybody, not greatly in fault themselves, to tolerable comfort, and to have done with all the rest. (p. 373)

It is hard to feel satisfied when the dreadful Mrs. Norris is banished from Mansfield Park, and it is difficult to rationalize the marriage between Edmund and Fanny. Though it is perhaps pleasant to imagine that the meek will inherit a living, a country home, and a fiancee through no machinations of their own, it is condescending, not uplifting, to conclude that these scenarios can only be brought to realization by virtue of a narrator eager to please.

Side note: I’ve heard a lot of talk about the supposed origins of the phrase “throwing shade,” and have been reprimanded for using the term myself. However, I found the phrase, deployed with the same contemporary meaning, in Austen’s novel! Page 68: “[Miss Crawford] is awkwardly circumstanced. With such warm feelings and lively spirits it must be difficult to do justice to her affection for Mrs. Crawford, without throwing a shade on the Admiral.” Ha!

*Please note that I read a very strange edition of Mansfield Park, and that the pagination differs substantially from the Penguin Classics version.