After a brief one-night stop at a friend’s house in Auckland, we proceeded to the Coromandel Peninsula — one of the places that everyone told us was a must-see. We stayed in an extremely nice (but unfortunately very expensive) Airbnb place in Whitianga for the first two nights, where a pack of chooks roamed loose in the yard. They’re inquisitive creatures, chickens! 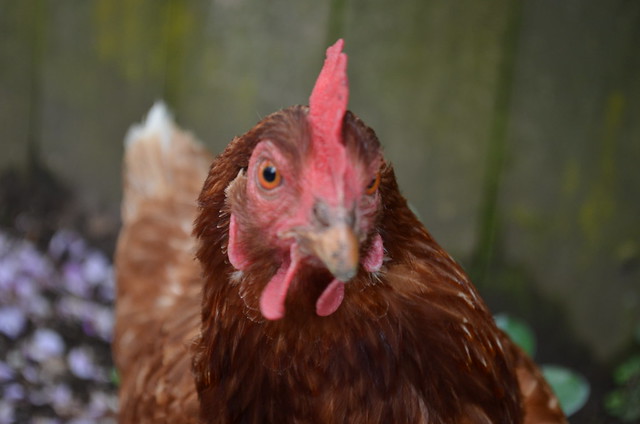 Luckily, Sunday, October 19 was sunny and warm, perfect for a day trip to Cathedral Cove. Cathedral Cove is considered one of the most beautiful places in the Coromandel, and by extension, the whole of New Zealand.

The Cathedral Cove car park is pretty easy to find. It’s a famous spot, and there are several helpful signs posted along the highway. Just turn onto Grange Road and drive until you can’t anymore. Even the views from the wooden lookout at the car park are spectacular — scattered islands to the north, and the cute town of Hahei to the south. 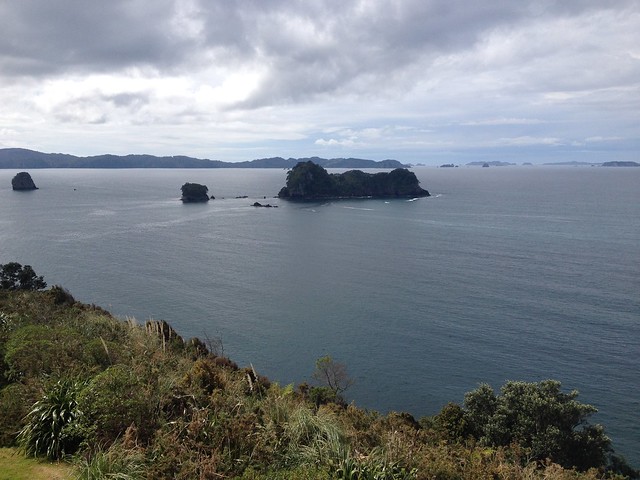 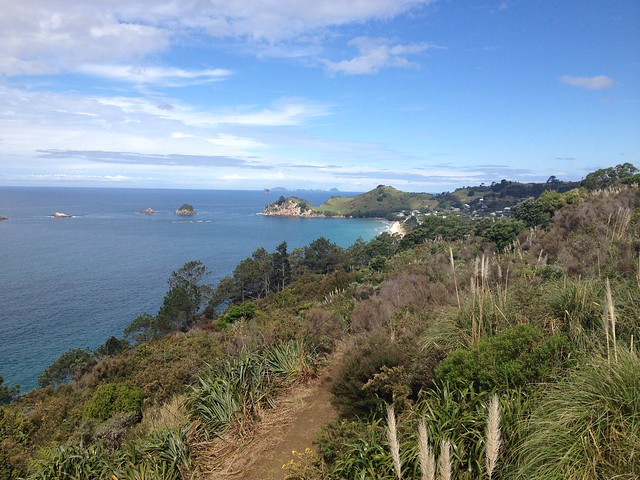 The journey to and from Cathedral Cove takes approximately two hours, but it’s a pretty easy walk as long as you don’t wear flip-flops. However, you really should allocate at least twice that amount of time so that you can enjoy Cathedral Cove and the other stunning bays along the way without feeling rushed. 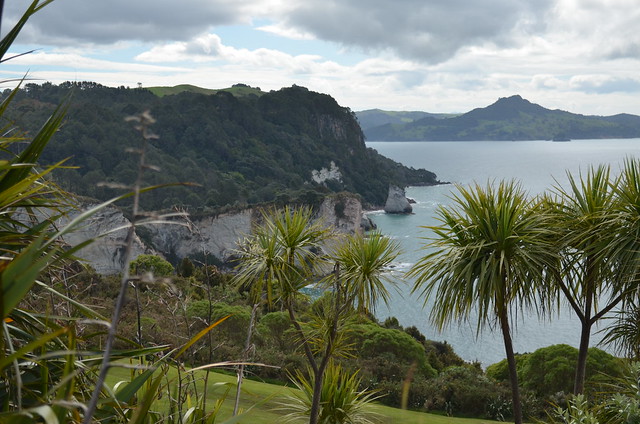 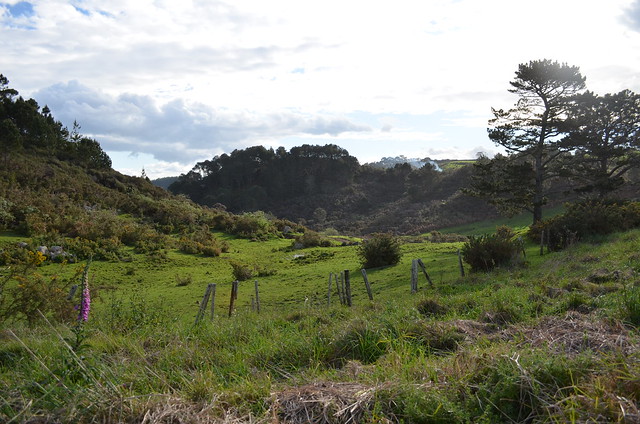 A portion of the walk passes through picturesque grazing grounds (typical for New Zealand), but there is also a miniature detour through a puriri grove which I highly recommend. 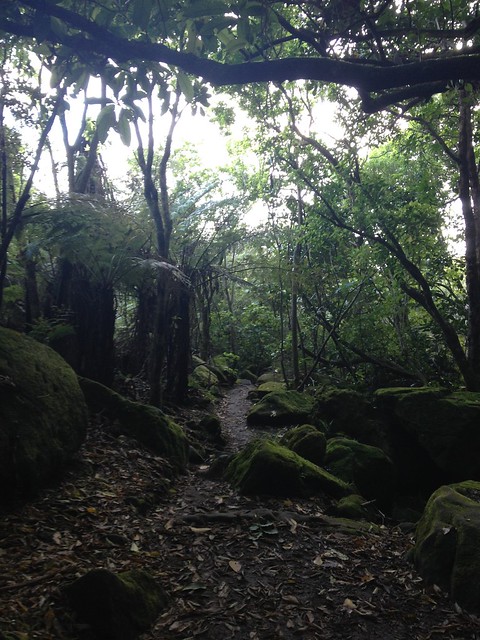 Our first detour, however, was to Gemstone Bay, which features a ruggedly beautiful rock beach. We spotted a group of tourists sharing a picnic on the boulders, so we didn’t linger for long. 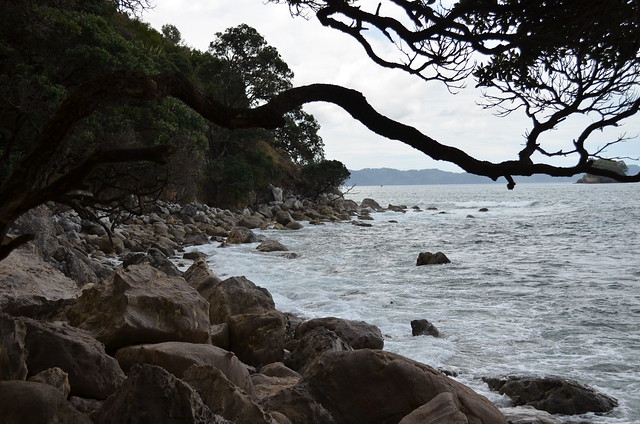 Next was Stingray Bay, which I thought was almost as stunning as Cathedral Cove! It consists of a small, secluded beach and a striking, white-rock peninsula that juts out into the sea. 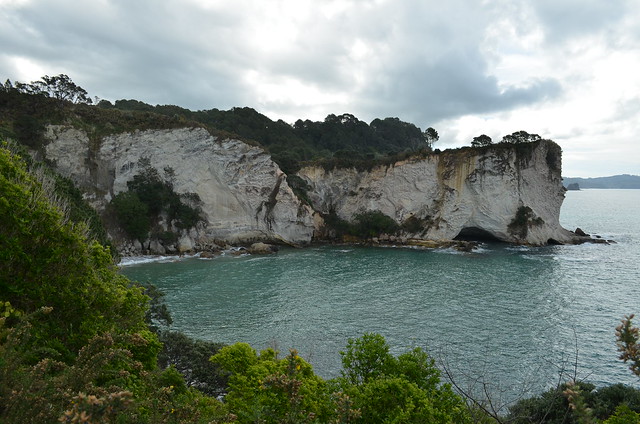 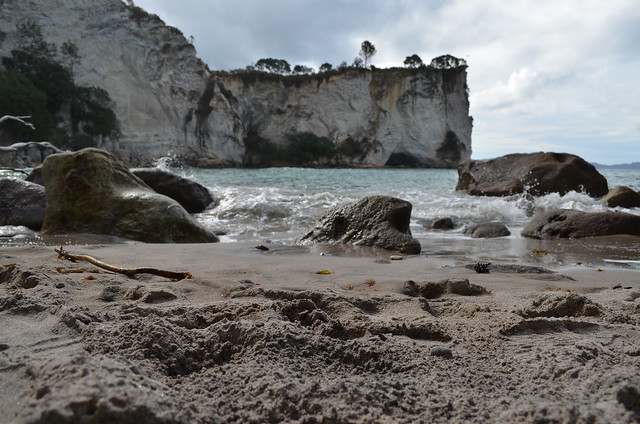 We continued down the trail, pausing every few minutes to look out over the sea peppered with small, green islands.  And then, after struggling down some flooded wooden stairs, was the famous Cathedral Cove. 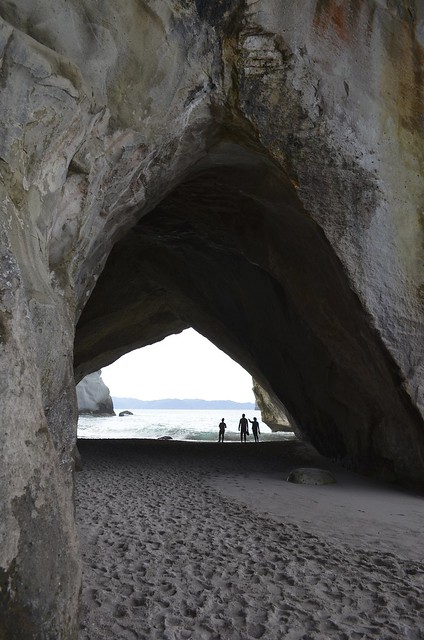 It’s easy to see where the name comes from — the main rock formation linking the two beaches is a large triangular dome, much like the high-ceiling interiors of classic cathedrals in Europe. 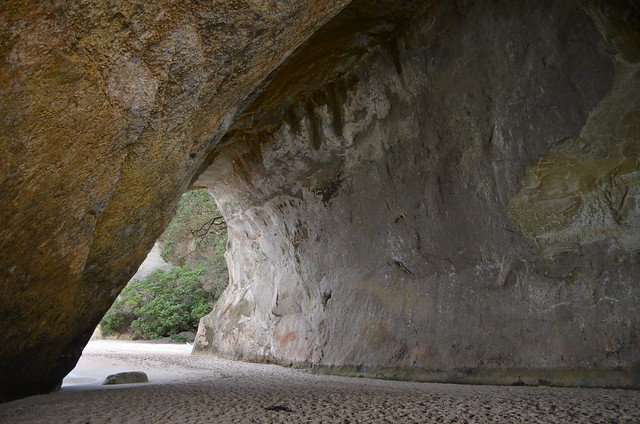 It’s an impressive structure, and it’s hard to believe that unlike the wooden-and-marble creations of old, Cathedral Cove is the result of all-natural forces. 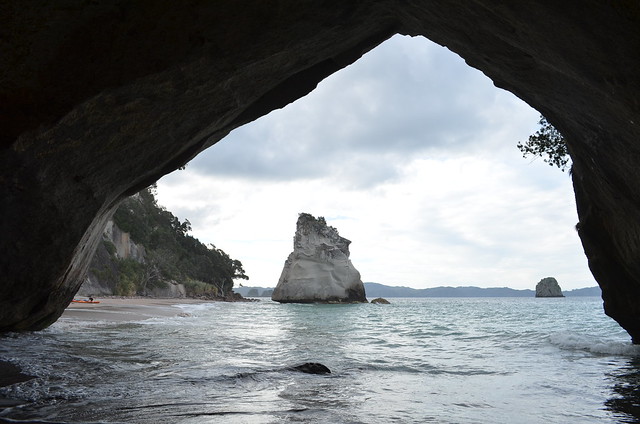 The second beach, which you can glimpse in the following picture, is not really a secret beach, despite what I’d like to think. At low tide, I’m sure that it’s easy to walk through the arch from one beach to the other. When the tide is coming in, however, you have to wait for a break in between the waves and hope that you can run quickly enough to avoid getting splashed. The reverse view of the Cathedral is so worth it, though! 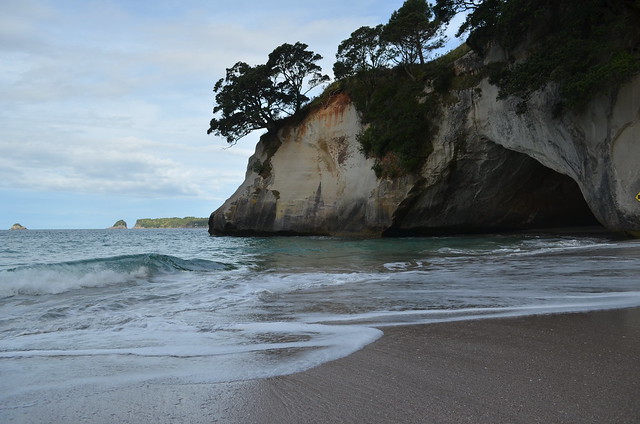 We sat on a piece of driftwood and watched a group of kayakers make their way onto the beach, one by one, by riding in on the waves. Kayaking (as opposed to hiking) to Cathedral Cove is a popular activity, and probably worth it, although I don’t know how much it costs to rent a kayak for the day. 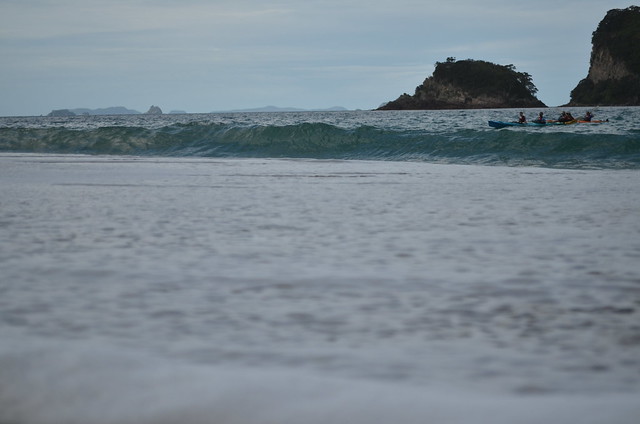 After making our way back to the main beach, G. spotted a small waterfall trickling down the side of one of the cliffs and proceeded to take some absolutely amazing photographs. 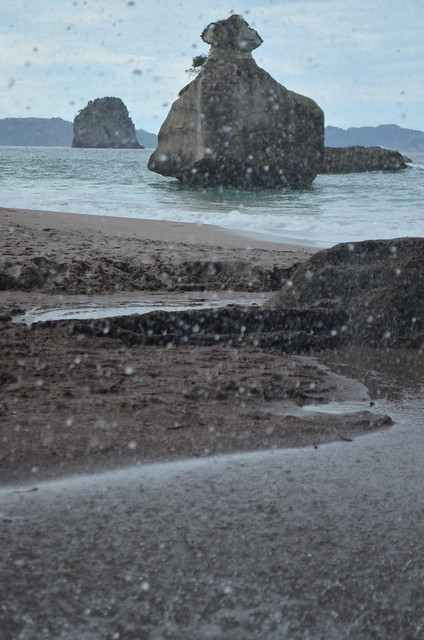 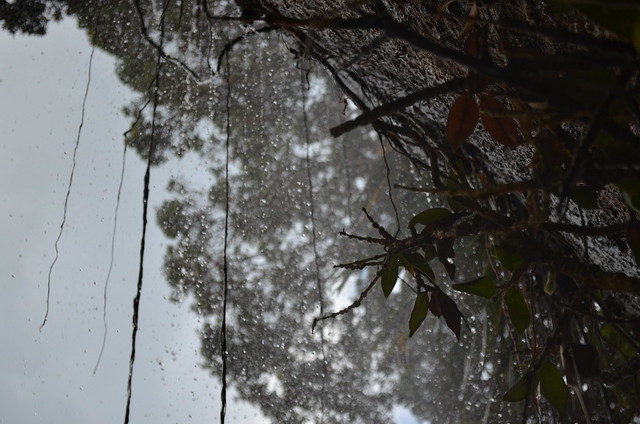 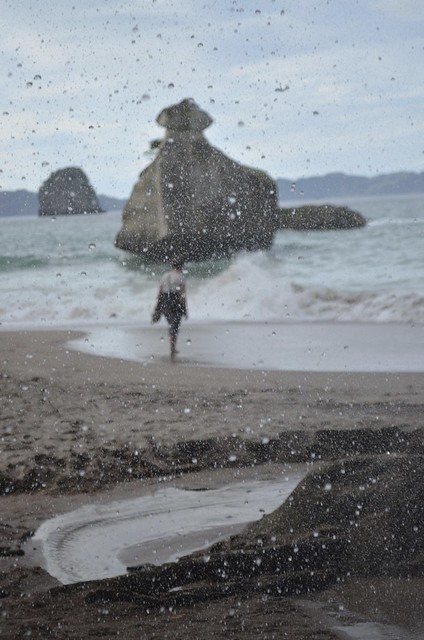 We sat on the beach for a few more minutes before deciding to turn back. 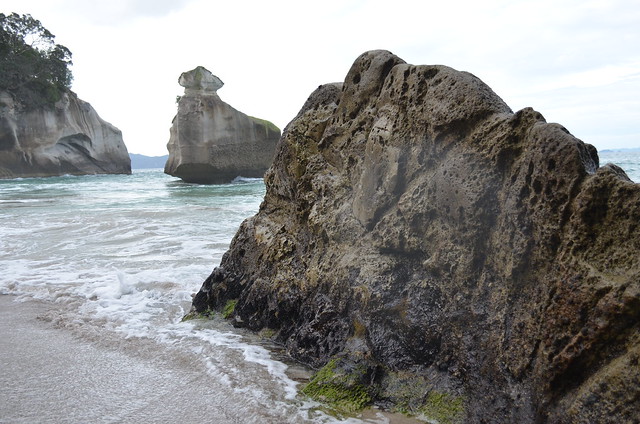 After making our way back to the car, we decided we had just enough time to see Hahei Beach before commencing the return drive to Whitianga. (Hahei Beach is only about a 10 minute drive from the Cathedral Cove car park, so you can easily see both places in one day). We arrived at Hahei Beach just in time to see the sun set over the waves. 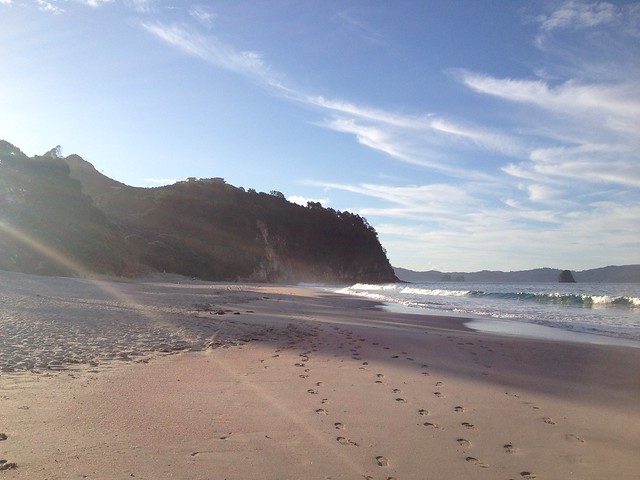 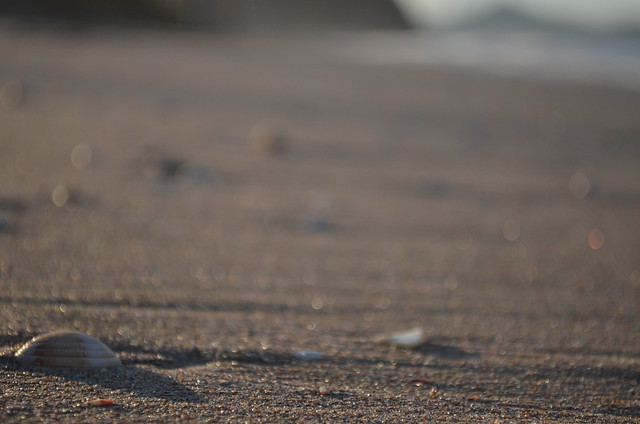 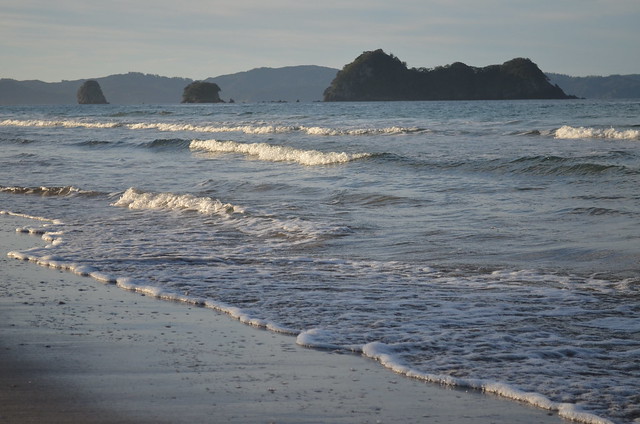 The next day, we said goodbye to the chooks (one of whom was very suspicious about my suitcase) and drove an hour back down the peninsula to stay in Thames. There, we completed the most challenging hike I’ve ever been on — but more on that soon! 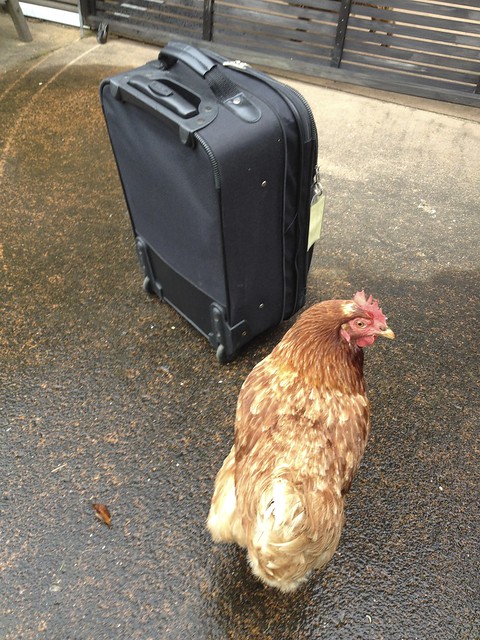 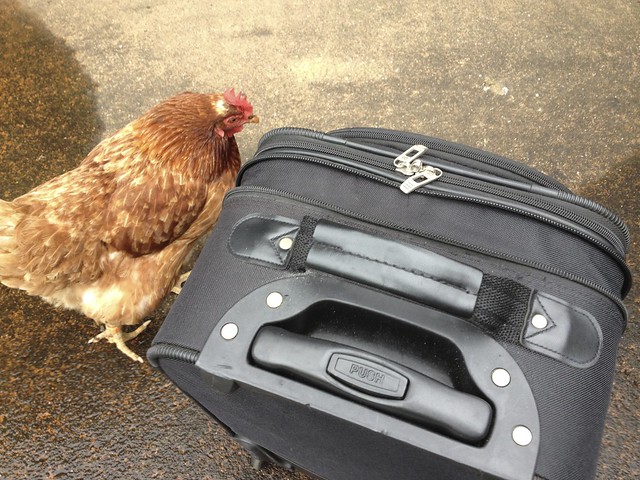 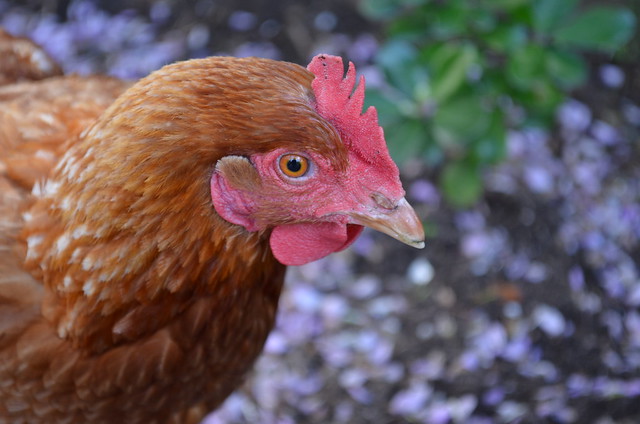