Death is not one of those topics that’s easy to talk about. Luckily, three uber-talented children’s book authors have tackled the subject beautifully & calmly.

For the youngest ones: Death, Duck, and the Tulip by Wolf Erlbruch
(recommended for ages 7 and under) 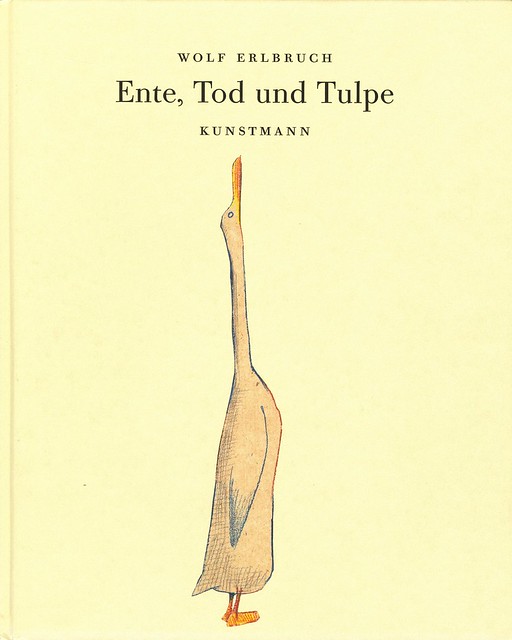 Although I haven’t read the English edition, I still adore this book. The illustrations are charming, simple, and tender, and from what I can tell, so is the text. The storyline is basic: death befriends a duck, accompanies her throughout life, and eventually mourns her passing. 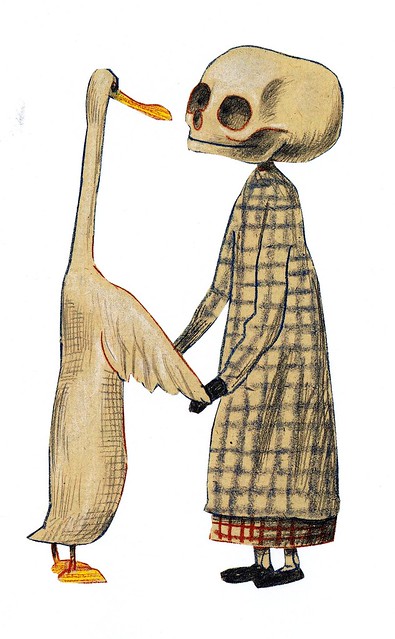 Although his head is a skull, Death looks childlike and even friendly thanks to his short stature and checkered outfit. He and Duck hold a series of basic philosophical conversations which seem to reassure Duck that Death is the natural complement to life. 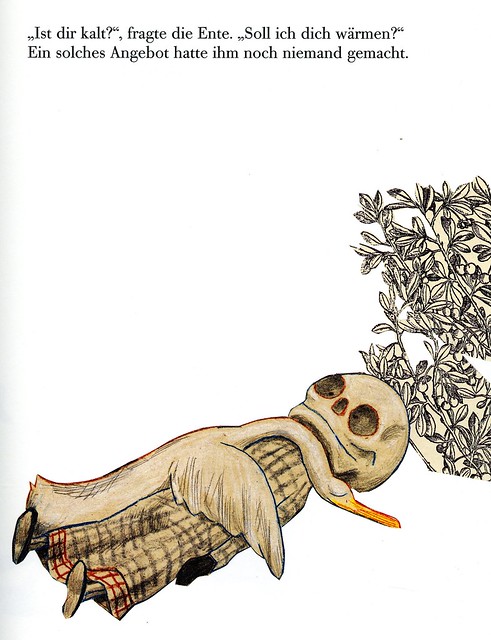 I should mention that although Wolf Erlbruch was awarded the Hans Christian Andersen Medal in 2006 for his lifelong contributions to children’s literature, Death, Duck, and the Tulip, which was published three years later in 2009, is probably his most acclaimed book. Not everyone would consider it a book for children. Guardian writer Meg Rosoff compared Erlbruch’s thematic focus and tone to those of Shaun Tan, a well regarded, but controversial, children’s books author. Personally, the sparse, existential approach to death and life in Erlbruch’s picture book reminds me of Samuel Beckett’s famous play Waiting for Godot. 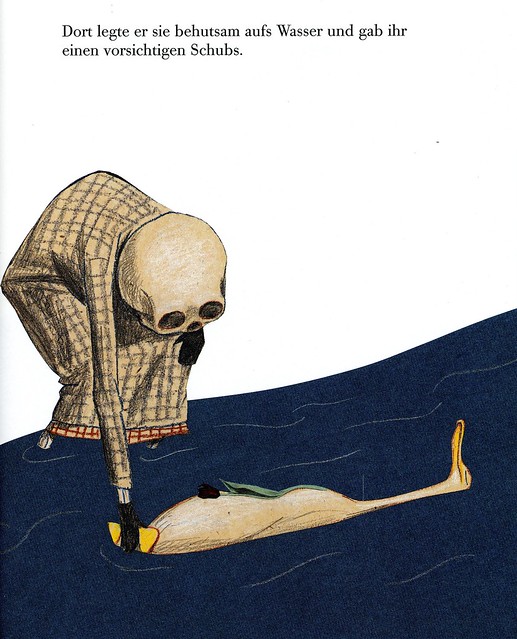 For a more thorough review of Death, Duck, and the Tulip, check out LightLit’s blog.

For the slightly older ones: Can you Whistle, Johanna? by Ulf Stark
(recommended for ages 8-12) 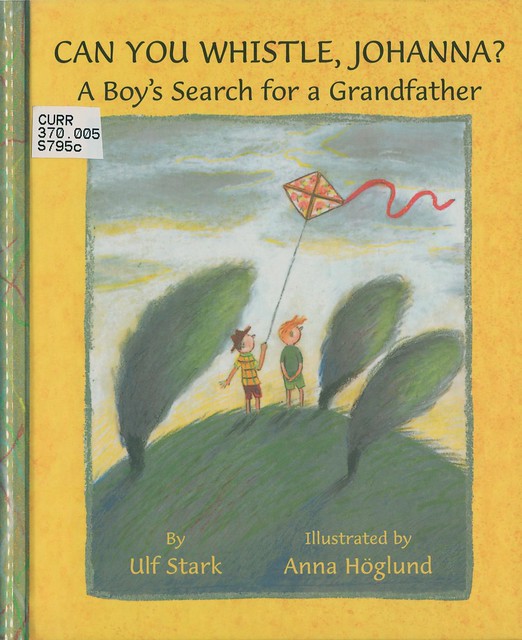 This book had me crying for a good 15 minutes. It is achingly sad, sweet, and lovely all at the same time. Like many of the best books, it has been received not without controversy outside of its country of origin, Sweden. It deals frankly with the issue of death; in this book, death is not a metaphorical relationship between an animal and an abstraction, but rather affects a young boy profoundly. 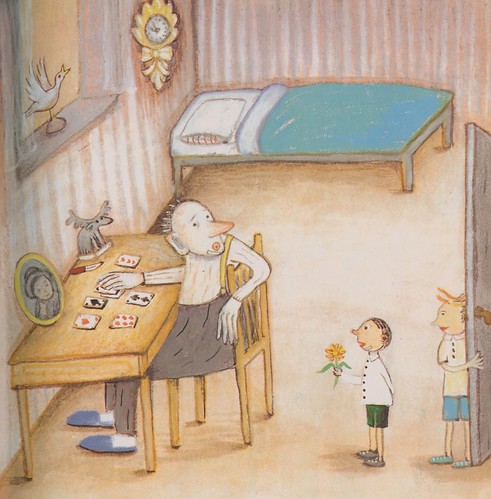 Berra is jealous because his friend Uffe has a grandfather, and he does not. Uffe suggests that Berra could easily “adopt” a grandfather at the nearby senior citizens’ home. This is precisely what they do.

…[W]e both go in and Berra hands [the old man] the flower.
‘There you go, Grandfather,’ he says.
The old man looks first at the flower, and then at Berra. He starts scratching his thin white hair.
‘What?’ he asks, ‘Am I your grandfather?’
‘Yes,’ Berra says with a smile. ‘And now here I am. It sort of hasn’t been possible for me to come see you before.’
The old man gives Berra a hug.
‘Look at how big you’ve gotten!’ he says, and rubs his eyes with his knuckles. ‘How old are you now?’
‘Seven,’ says Berra.
‘Well, I’ll be darned,’ says the old man. ‘Here I was feeling all alone, and then you come along.’

The elderly man, Nils, happily becomes Berra’s grandfather. He flies kites with Berra and Uffe, invites them to drink coffee, and, best of all, teaches Berra how to whistle. The book is complex in that it not only deals with death in a loving and comprehensible way, but also demonstrates that the deepest familial relationships are not necessarily biological. The process of adopting a grandfather may seem simple, but it’s actually quite profound: both Berra and Nils were in need of a specific kind of fulfillment, and they selected the familial equivalent to describe their intergenerational friendship.

Predictably, Nils grows increasingly senile and finds it difficult to complete everyday tasks. His appreciation of and affection for Berra never wanes, though. 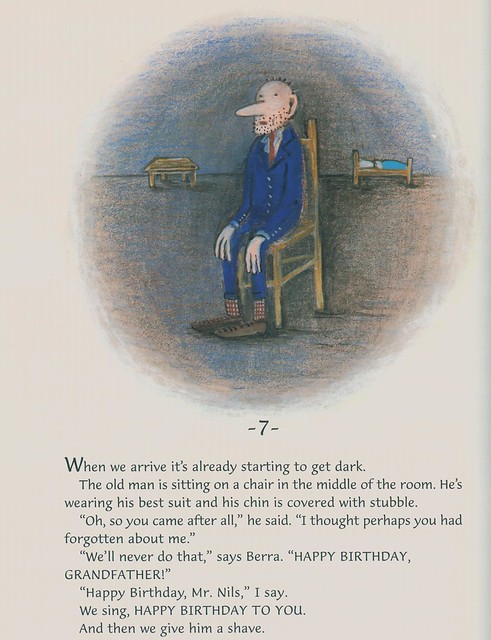 When the ending inevitably arrives, Berra is crushed. But he is nonetheless enriched by the experience of getting to know his not-so-pretend grandfather. The ultimate lesson is less about how to cope with death, and more about the realization that the more a person is mourned, the greater an effect they had on their loved ones while they were alive.

For the even older ones: Harvey: How I Became Invisible by Hervé Bouchard and Janice Nadeau
(recommended for ages 11+) 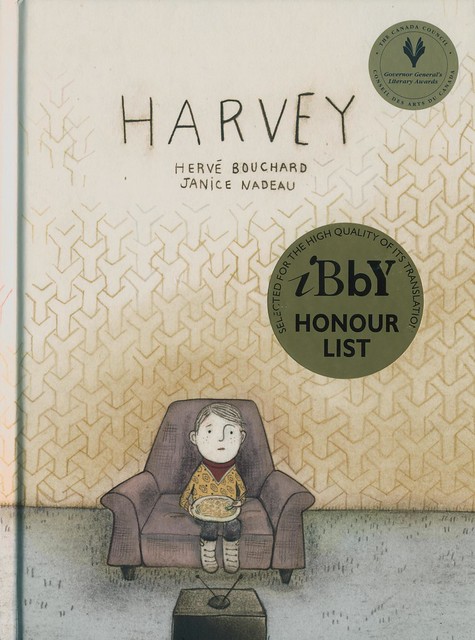 A slow, bleak zooming in, moving from gray, snow-swept landscape to a huddle of small houses, a dusty car, a small boy on a bike. So begins Harvey, narrated, in diary-like form, by a boy of the same name. We are briefly introduced to Harvey’s brother, Cantin, with whom Harvey has a resentful relationship — Cantin is young, but significantly taller, and Harvey hates being small. Harvey’s mother, on the other hand, has an antagonistic relationship with the weather and a fondness for damning everything. 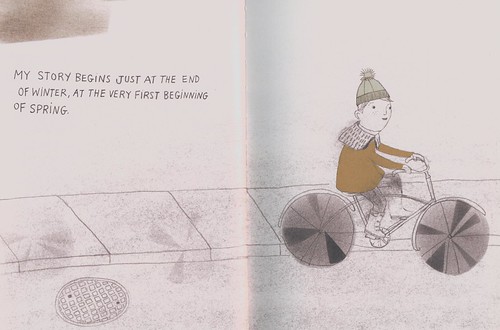 Harvey recounts his father’s death with a soft sadness, a lonely detachment, almost as though he is watching himself move through the events instead of being present to witness them. The somber illustrations, cast in a muted color palette of browns, light blues, and ochre, underline the sorrowful text, as does the shape of the text itself. The handwriting is deliberately neat, in all caps, with occasional eraser marks that show how Harvey struggled to tell the story. A bell-shaped priest offers little comfort; all of the neighbors shamefully watch as Harvey’s father is rolled away in an ambulance. 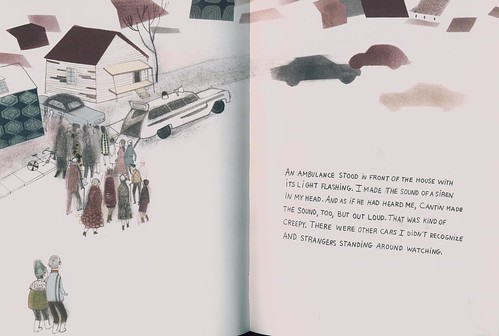 The illustrations almost seem like they are fading away before your eyes, much like Harvey’s happiness. Their house is no longer a house, but a black box in which the three unhappy residents — mother, Harvey, and brother — are doomed to wait out their sorrow. Harvey further conveys his hopelessness through a retelling of the film The Incredible Shrinking Man. Just as Scott Carey shrinks in the movie, so does Harvey’s sense of self shrink in the face of the tragedy. While attending his father’s wake, Harvey disappears within the pain. Late at night, the memory of his past life keeps Harvey awake. 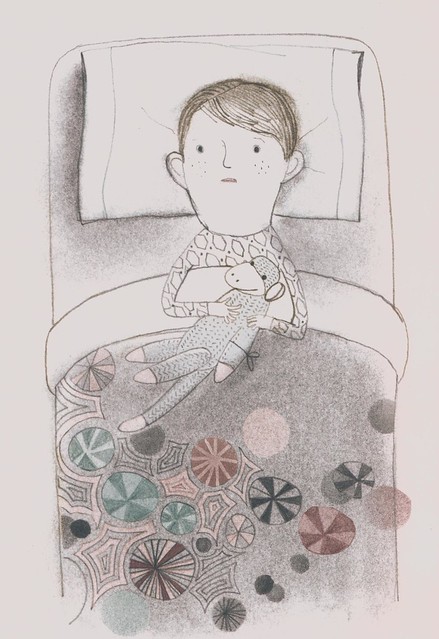 Is this an uplifting book? No. But it’s very simple. And sometimes, when talking about something as empty as death, simple is all that you can deal with. The book doesn’t end on a false note of happiness, nor does it suggest that happiness is the natural state to which Harvey should return. Instead, the story ends in the middle of Harvey’s sadness, a powerful argument for the utility of mourning. Furthermore, the book is completely devoid of condescension, a quality that, by itself, marks it as a work of quiet dignity, a seemingly private story to which even I could relate.

Ages 7 and under: Death, Duck, and the Tulip written and illustrated by Wolf Erlbruch. Translated from the German by Catherine Chidgey. Available in English from Gecko Press.

Ages 8-12: Can You Whistle, Johanna? written by Ulf Stark and illustrated by Anna Höglund. Translated from the Swedish by Julia Marshall. Available in English from Gecko Press.

Ages 11 and up: Harvey: How I Became Invisible written by Hervé Bouchard and illustrated by Janice Nadeau. Translated from the French by Helen Mixter. Available in English from Groundwood Books.

19 thoughts on “Three Books about Death for Children”