Everyone we talked to in Auckland told us we had to spend a day in Devonport. After several rainy days, we finally got our chance. We hopped onto the ferry, and a short ten minutes later we were strolling through the quaint seaside town. 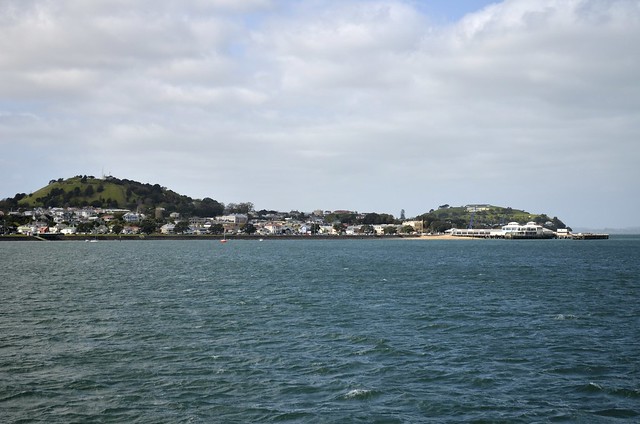 Devonport is located on the tip of a peninsula that extends into the Waitemata Harbour, meaning that the ocean is visible just about everywhere you walk. Because New Zealand is located at a relatively low latitude, its climate resembles that of the British Isles, not Fiji or other Southern Pacific outposts. As a result, Devonport is reminiscent of a New England fishing village combined with the laid-back California coast. 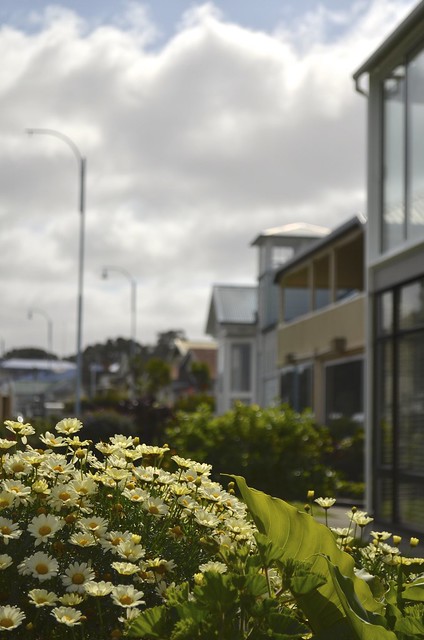 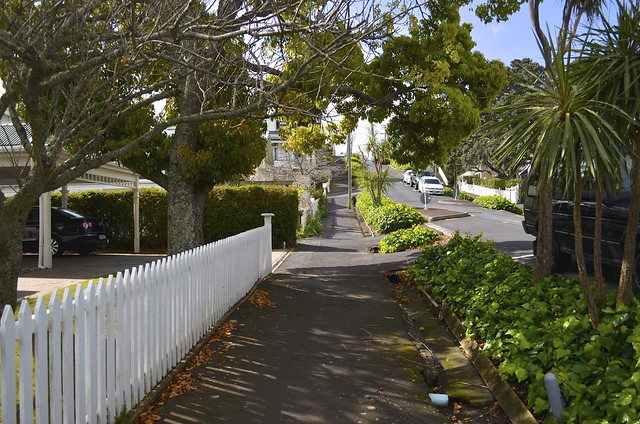 It’s all hills, beautiful houses, flowering sidewalks, and little stores. Seriously, the architecture had me gasping. Lavender and ivy line the streets; even the fire station is adorable. It’s definitely the most charming part of Auckland that I’ve seen, and I suspect many locals would say the same. 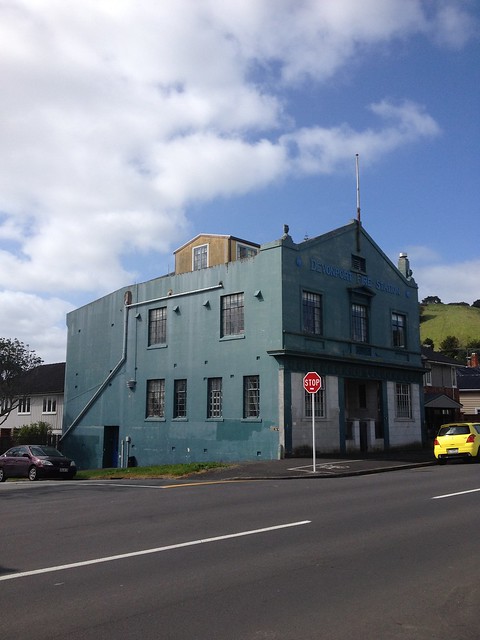 Like everywhere in New Zealand, you don’t realize how small Devonport is until you’re walking through it. We made it to Mt. Victoria, one of Devonport’s most famous landmarks, without even meaning to. The path, though, was slightly hard to find. 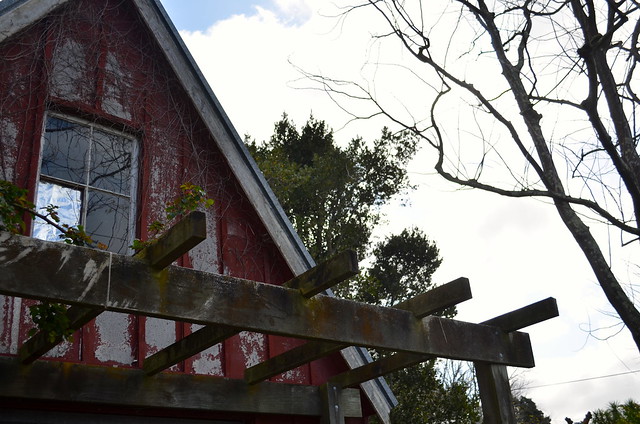 We walked 3/4 of the way around the mountain, passed a unique-looking red house, sniffed some more lavender, and finally spotted a sign that appeared to lead up someone’s driveway. 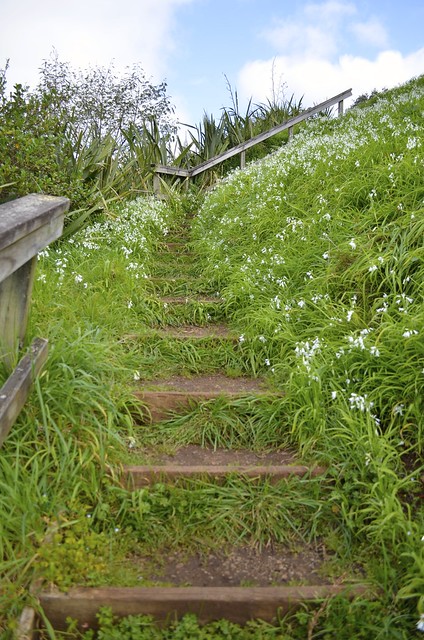 Hint: you do have to walk up someone’s driveway. But at the end there’s a wooden stairway lined with delicately drooping white flowers. The walk to the summit was gorgeous — all of the slopes were covered with those elegant little flowers. 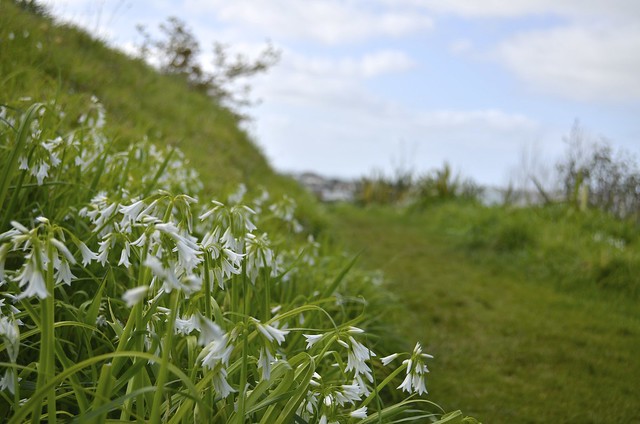 On the southern side of the mountain was an elementary school. We saw a mom stop by to pick up her son. Can you imagine?! Walking up a mountain every day to drop off your kid at school? Such is life in New Zealand. 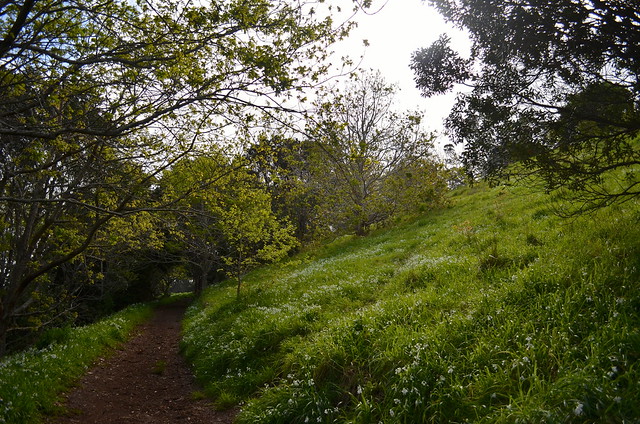 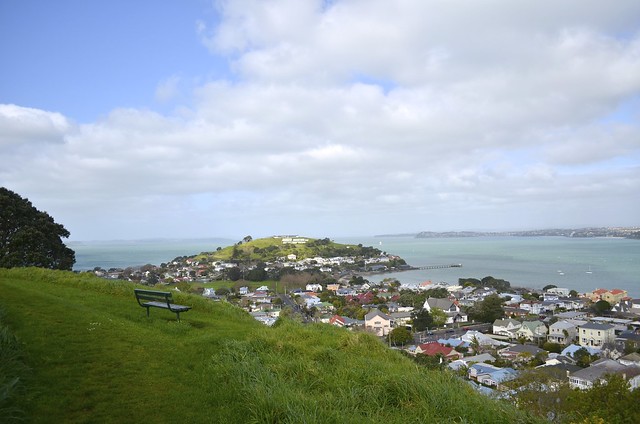 I’ll take this opportunity to wax lyrical again about the preponderance of tiled roofs in New Zealand. Juxtaposed with palm trees and a glittering harbour, the aesthetic is simply lovely! 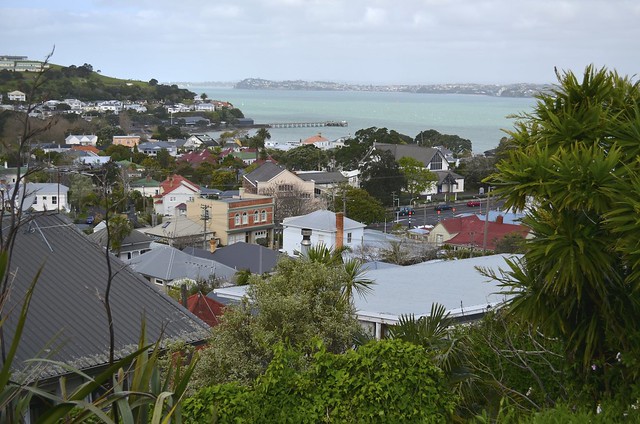 It was also possible, of course, to see several islands from the top of Mt. Victoria — most notably Rangitoto Island, most of which is comprised of a scenic reserve. 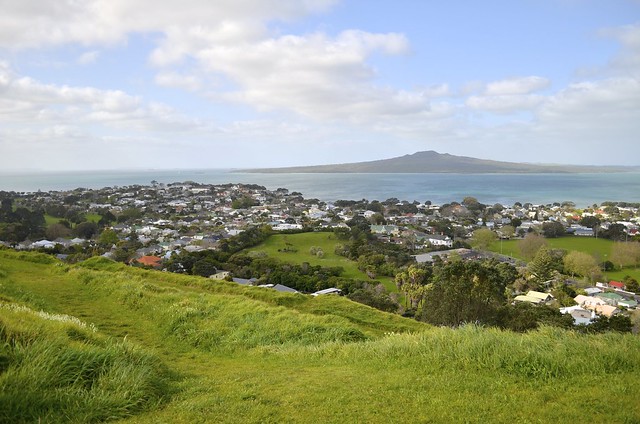 There are also some things that you wouldn’t expect to find at the top of a mountain, including a field of metallic mushrooms… 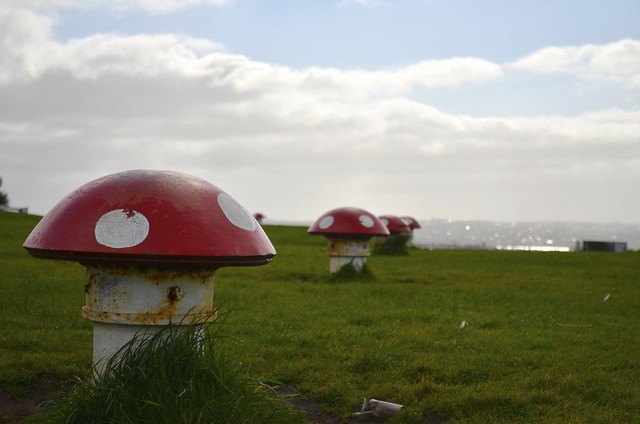 And a folk music club. Of course there’s a local music organization that holds its concerts in a tiny concrete structure at the top of the mountain, of course. 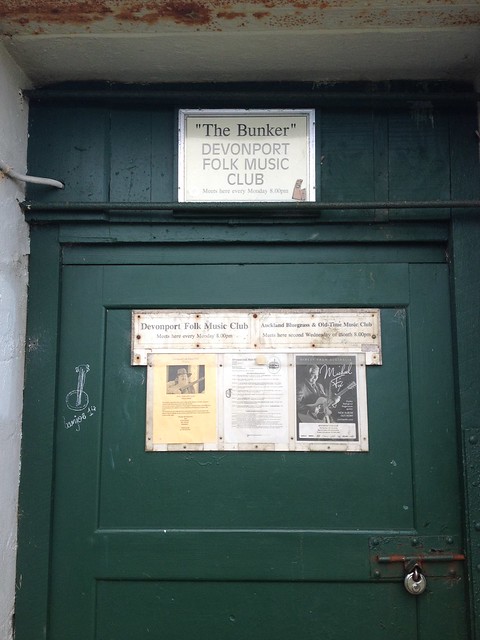 Predictably, you also get a nice view of the Auckland skyline. 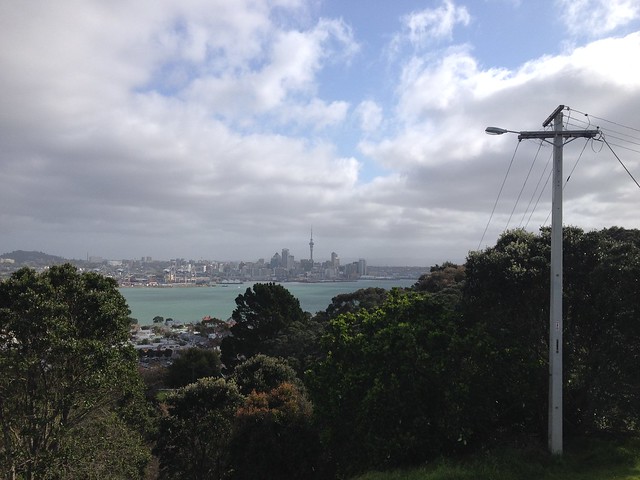 After we stumbled back down the mountain, we were in serious need of nourishment and stopped at Corelli’s cafe to enjoy a remarkably delicious penne pasta, crispy shoestring fries, and an absolutely enormous brownie. The prices were quite reasonable, and I definitely recommend Corelli’s mismatched chairs and cheerful ambiance if you happen to find yourself in Devonport. 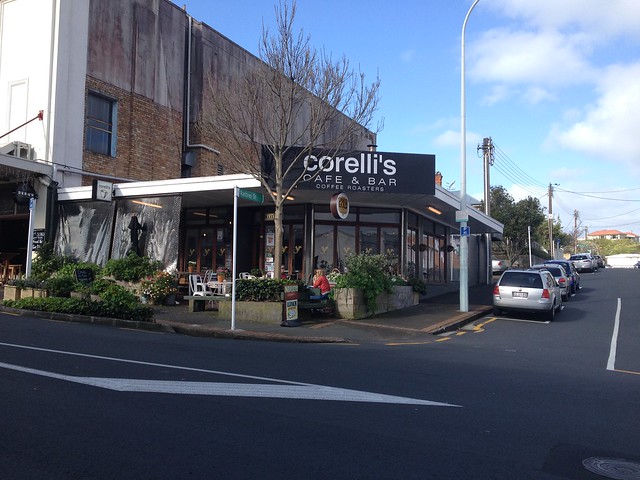 Then we just wandered through the little shopping center, unwilling to get back on the ferry until after the sun had set. 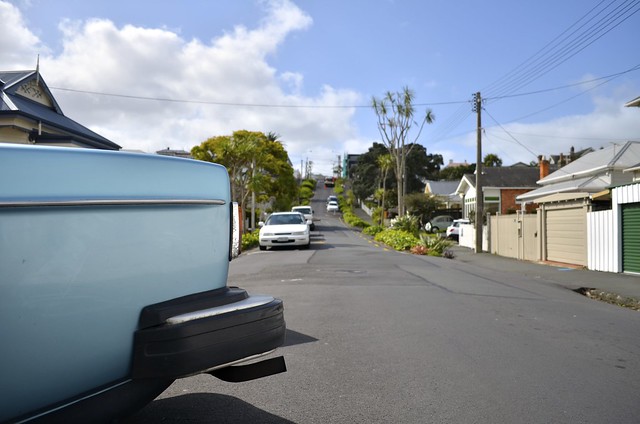 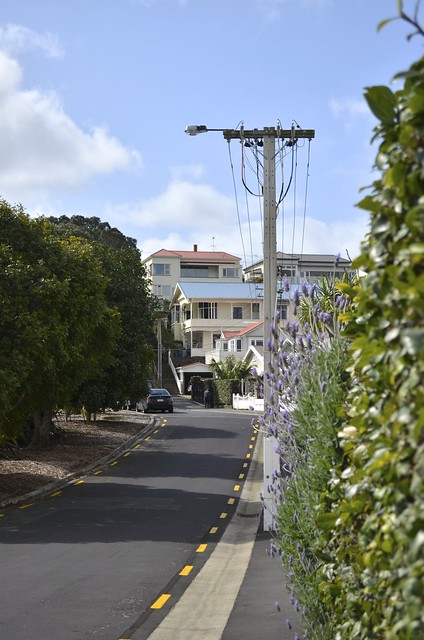 Bookmark had a promising selection of used books, but unfortunately the used book prices in New Zealand are more than I’d normally pay for brand-new paperbacks. Nevertheless, it’s another store I can recommend based on quality of merchandise. 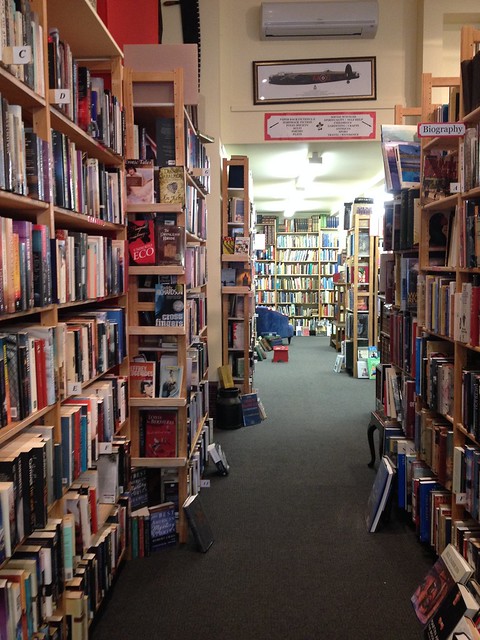 This wouldn’t be a proper post about Devonport without mentioning that Lorde grew up in this suburb. She played some of her first shows at the Victoria Cinema, which is located just a few meters away from Corelli’s. “No postcode envy,” my ass! Devonport is nothing but lovely. 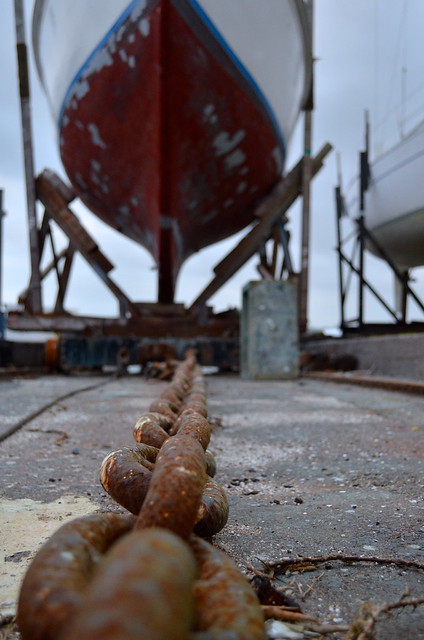 I may have only spent an afternoon in Devonport, but I could have happily continued to wander through its winding streets if not for the impending rain, oncoming chill, and lure of a hot cup of tea.

4 thoughts on “An Afternoon in Devonport”