I begin this post with a picture, because that’s really the best way to talk about Waiheke Island. Located just a 35-minute ferry ride from downtown Auckland, Waiheke has become famous for its relatively slower lifestyle compared to the city of 1.3 million. Filled with beautiful beaches, lush walkways, little harbors, and endless hills, Waiheke is certainly worth visiting if you find yourself in New Zealand. 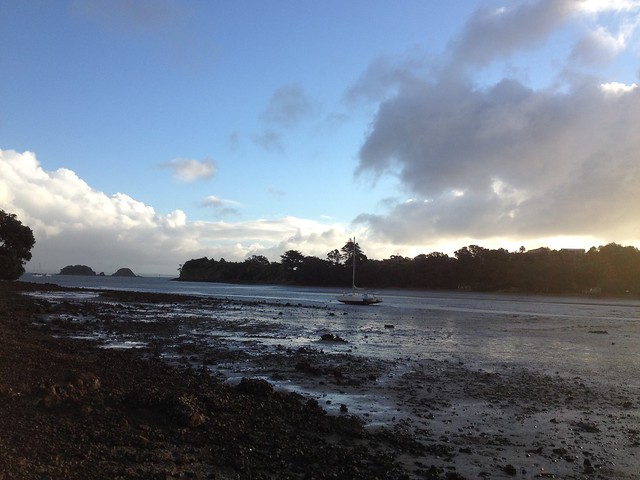 We arrived last Sunday near sunset, when the tide was out. Because Waiheke is considered a desirable vacation destination, the island’s larger homes regularly sell for upwards of $1 million. We stayed in a smaller, cozier dwelling filled with seashells, books, and fresh flowers owned by German/Argentine couple — ah, the benefits of using Airbnb!* Although it rained a significant percentage of the time that we were on Waiheke, we used those hours as an excuse to relax, share a surprisingly delicious $6 bottle of New Zealand Sauvignon Blanc, and watch several episodes of House M.D. 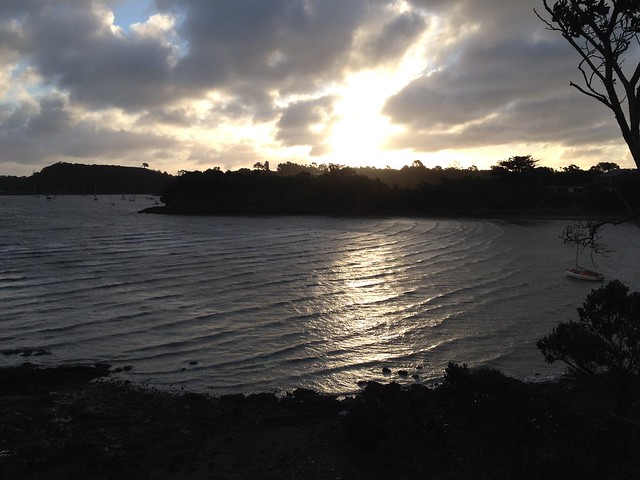 The first day, we had just enough time to take a quick walk along the coast and snap some photos of the sunset. The sunlight in New Zealand is amplified by the frequent presence of beautiful, fluffy clouds. It’s no wonder that the Māori name for New Zealand is Aotearoa, or “land of the long white cloud.” 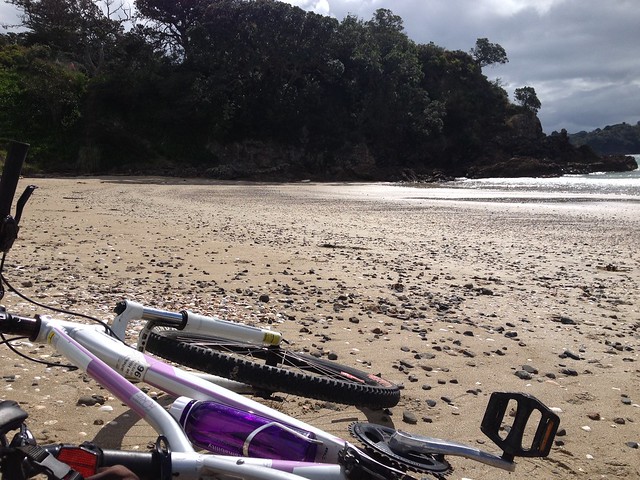 The next day, I very ambitiously insisted that we rent mountain bikes and try to see as much of the island as we could. Ambitious, because of those aforementioned hills. I must advise future travelers against renting regular mountain bikes — unless you’re a professional cyclist, you won’t be able to make it up Waiheke’s steep slopes.  For just $20 more per day, you can rent an electric-assisted bike that will enable you to cover much more terrain. I wish we had done this instead! Still, it was a fantastic, if grueling, workout.

We took several lengthy pauses, including one at Hekerua Bay, and another at Palm Beach to watch the tide going out and to explore the rocky coastline. 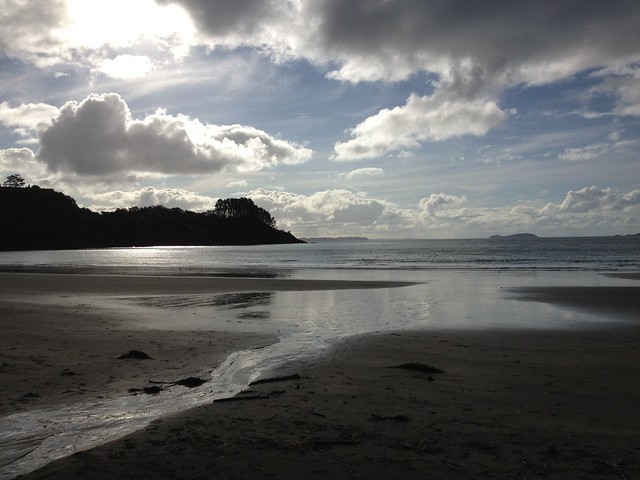 Although Waiheke technically isn’t a volcanic island, it’s still composed of volcanic rock, chunks of which are forcefully present along the beaches. In fact, Waiheke’s unique and varied composition is part of what makes it such an excellent place to produce wine — grapes grown just a short distance apart may taste significantly different. The semi-porous, red-tone rocks are striking to observe and easy to walk across thanks to their highly textured surface. 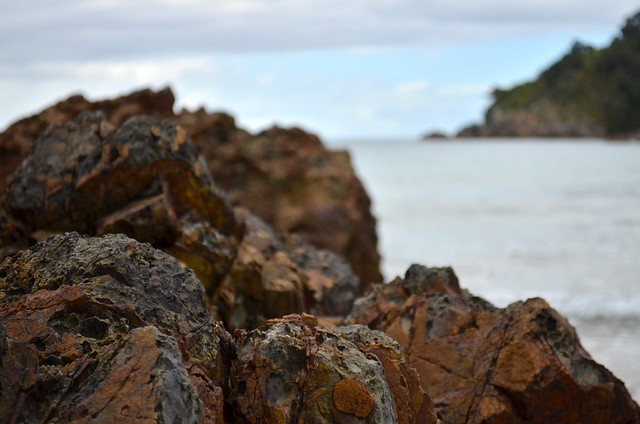 On our second full day on the island, we took it fairly easy — we were still exhausted from dragging those mountain bikes up the hills! Our Airbnb hosts drove us to yet another beautiful beach situated along Onetangi Bay. It was unbelievably picturesque and utterly surreal, just like the rest of our time on Waiheke. 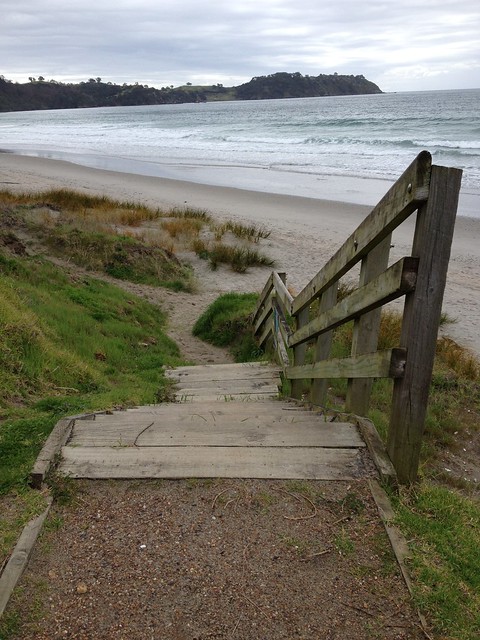 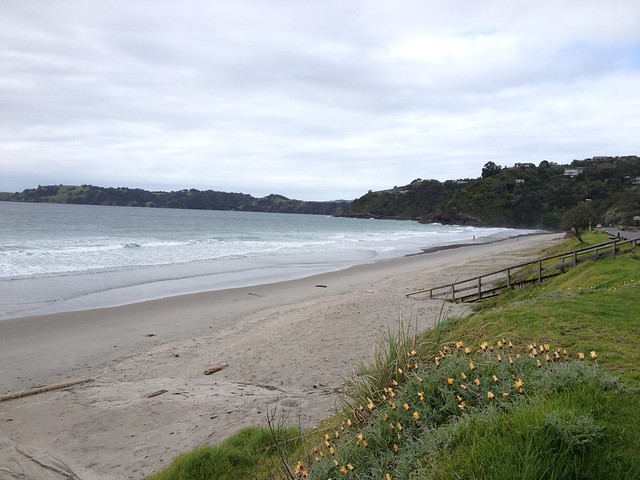 Like the rest of New Zealand, on Waiheke island there’s always a rainstorm on the way. It’s also perpetually windy, meaning that most umbrellas really do get blown inside out within seconds — just as my favorite Kiwi YouTuber, Charlie Marie, warned in her “Winter Essentials” video. Bring waterproof shoes, a sturdy windbreaker that doubles as a lined raincoat, and LOTS of long-sleeved shirts for layering. The dramatic shifts in weather do make taking impressive photos fairly easy, though! 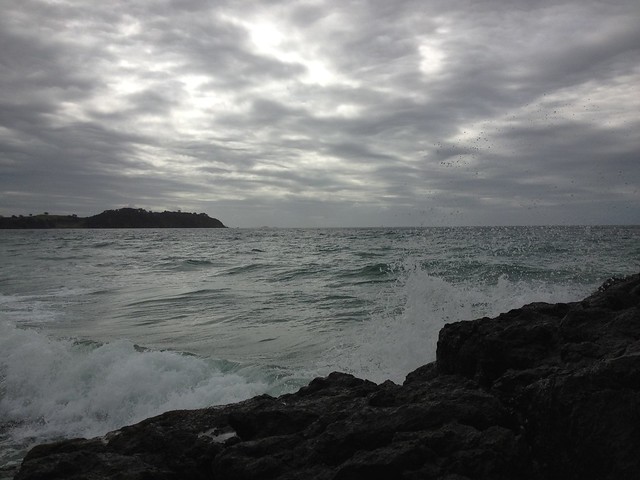 Later that day, we got takeaway fish ‘n’ chips and walked down to Oneroa Beach, where we sat at a picnic table and watched dolphins swimming back and forth across the bay. I did take pictures of the dolphins, but unfortunately the zooming feature on my iPhone isn’t much good, so I’m afraid none of them are worth sharing! It was a big event, though; apparently the dolphins’ feeding frenzy in Oneroa Bay was shared on the Waiheke community news board the following day. I did manage to grab this elevated photo of the beach while exploring yet another of the island’s endless walkways. 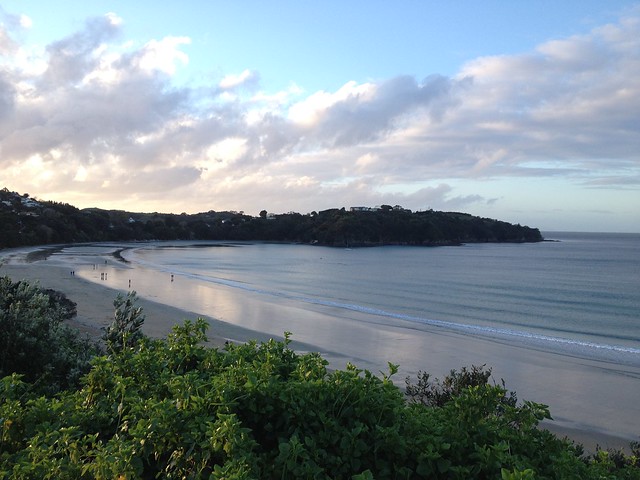 If you do make it out to Waiheke, I strongly suggest giving yourself a full day (or two, or three) to just wander all over the island and explore as many of its walkways as you can. 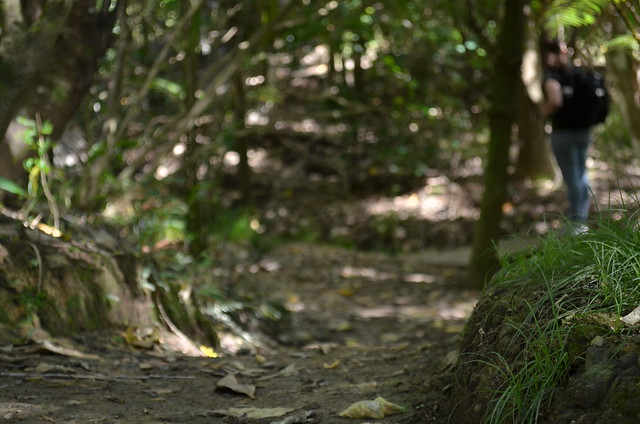 We witnessed yet another stunning sunset, and took a leisurely walk back to our rented room in the fading light. 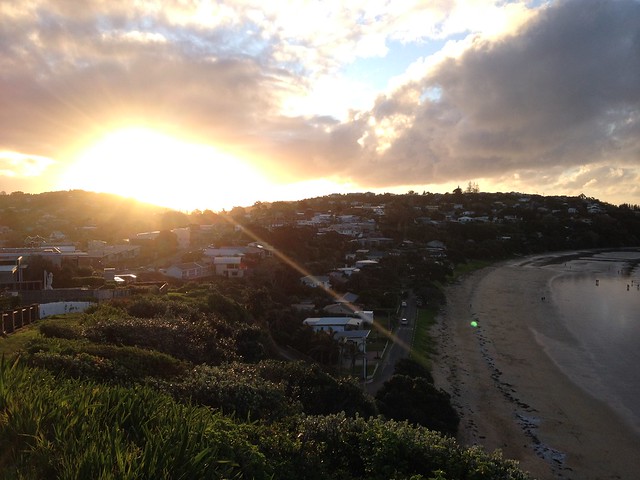 Although Waiheke’s hills are studded with million-dollar homes, it doesn’t feel like a tourist destination. True, it is small, with a quaint Fruit ‘n’ Veg shop and just a handful of proper restaurants, and its population will double during the busy summer months. But the island’s pace is perceptibly slower, a feature the permanent residents cherish.  Like everywhere else in New Zealand that we’ve seen so far, Waiheke is extremely clean, bordering on pristine. Its beaches are natural and scattered with seashells of significant size, not drowned out by tons of white sand dumped in a desperate attempt to evade erosion. It has been discovered, but it was not exploited in that process of discovery. And that’s a rare thing for us to witness. 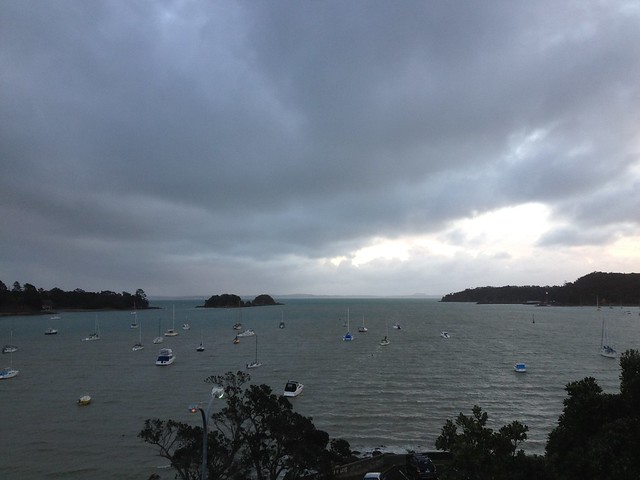 Even the seagulls are pretty and snowy white! 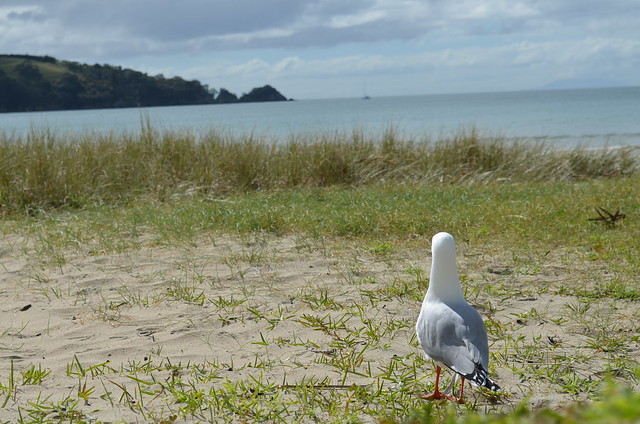 I don’t know if I’m naturally impatient and ambitious, or if being raised in the United States made me that way. Regardless, I hope that my imposition of day-to-day “goals” and stressors will slowly fade away as I continue to travel through New Zealand. The benefit of visiting Waiheke during the off season was that it wasn’t crawling with tourists and there wasn’t much of anything to do besides take in its natural beauty. 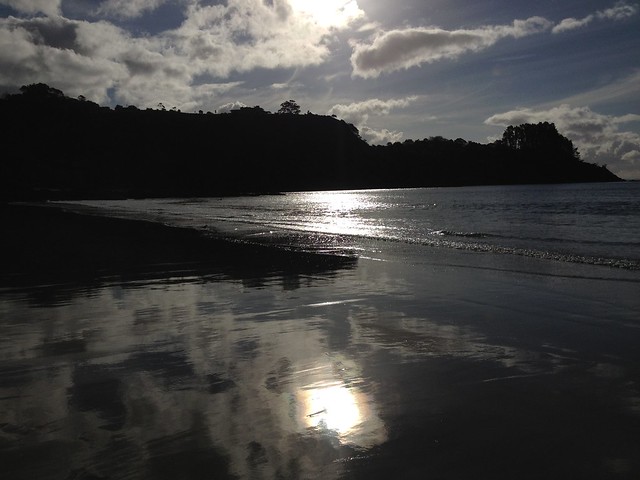 I do think, though, that we might be returning in December/January to experience the richness of the island summer, and maybe to do a bit of work on Waiheke’s vineyards, which we weren’t able to see this time around. Even so, we appreciated the three days we spent there.

*Disclosure: This Airbnb link is tied to my username. If you make a reservation using my link, you will get $25 off your first booking. I receive $25 toward my next reservation as well.