It’s hard to believe that I’d never heard of Octavia Butler until a few weeks ago. How did the wonderful work of possibly the most celebrated female African-American writer of science fiction manage to bypass me? Or rather, how did I manage to bypass her? While I’m sure that the answer reveals more about my upbringing and education than I’d like to admit, at least I know who she is now.

Evelyn Alfred of the blog Librarian Dreams asked back in May whether her readers would like to participate in a Twitter blog party to discuss two of Butler’s stories, published posthumously as an e-book just last month. I’m not particularly adept at Twitter (how on earth are you supposed to process all of that information? I’ll take a discerning algorithm, please), so I thought it would be a nice “social media” challenge. Plus, I usually want to discuss the books I read, and as fulfilling as a blog can be, it’s often a one-sided conversation apart from the comments section.

With that lengthy intro aside, here is my concise review of Unexpected Stories, interwoven with snippets from the Twitter conversation. 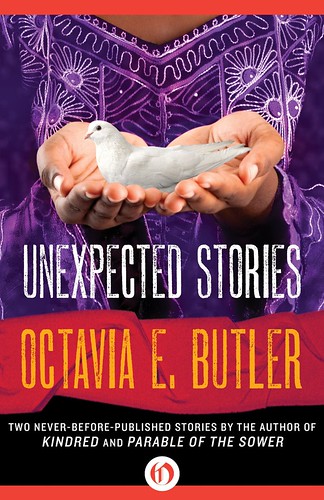 The first of the two stories is my favorite, purely because of its length. Set on another planet with a terrain similar to the Earth’s, “A Necessary Being” is about a vulnerable group of people, the Kohn, who have splintered into warring tribes. At the head of each tribe is a bright blue Hao, a semi-deity with unparalleled fighting skills and acumen (Avatar inspiration, anyone?). The head of the Rohkohn tribe is Tahneh, a middle-aged female who has been unable to provide her people with a successor. As a result, the entire tribe is endangered — without a Hao, a tribe disintegrates quickly.

What is most striking about “A Necessary Being” is the complex, yet rigid, hierarchy in which the Kohn live. One’s social status is entirely dependent upon amount of blue in one’s skin. Occupying the lowest caste are farmers, artisans, and other nonfighters with muted yellow skin. Above them are hunters and fighters, cast in shades of green. Only the judges and the Hao are legitimately blue — and of course, the Hao is a deep, determined, and resplendent blue.

This hierarchy is reinforced by the color spectrum of emotions. That is, the Hao change color depending on their mood.

Interestingly, just as social positions fall into alignment along the yellow → green → blue color spectrum, so, too, are emotions roughly sketched onto the same hierarchy. “Lower” emotions, like yellow (which symbolizes anger, pain, and submission) and green (indicating embarrassment), are subservient to “higher” emotions like white (approval, amusement) and, naturally, blue (power, dominance, confidence). It’s a fascinating correlation, to say the least, so if you do happen to read the story, be sure to pay attention to this dynamic.

As you would expect from an Octavia Butler story, many of the characters in “A Necessary Being,” mostly notably the Hao themselves, question the hierarchy that is considered “natural” in their society. It would be easy to say that Butler was attempting to map contemporary race relations in the United States onto a fictional society of her creation, but the intersection of mythology, skin color, and emotion complicates this comparison. It’s not only a critical look at power structures and how they automatically privilege certain people over others, but also a partial indictment of the way in which people learn to internalize visible social “cues” and accept them as a natural pecking order. It certainly provides much food for thought.

Of course, any person could speak with [Hao] Tahneh regardless of caste, but most people preferred to go through their caste chiefs. The blue made them secure, but when it came too close, it also frightened them.

Part of the tension between expected vs. demonstrated behavior was expressed in the difference between liaisons (e.g., casual sexual relationships) and marriage. Liaisons between different caste members were tacitly accepted among the Kohn, but marriages in which children were produced were significantly more controversial.

I asked my fellow Twitter partiers why this was the case. I’ve included a couple of their insightful responses below.

I won’t say anything more about this story — I don’t want to spoil it! It’s certainly worth a read, though. It reminded me of The Martian Chronicles, but was more complex. If, like me, you are hungry for more when the story ends, Butler’s book Survivor is considered the sequel.

Though “Childfinder” was only a few pages long, it left me deeply intrigued. It takes place in a futuristic society identical to our own, except that a significant portion of the population has developed psionic (i.e., telepathic) abilities. Instead of creating a utopia, however, or even improving communication among humans, the psionic abilities are weaponized and used to further marginalize and control the lower strata of society. It’s a bleak portrait, to say the least.

Clearly, the ability to listen is not synonymous with the ability to care — the NSA proves this all too well. In fact, with surveillance technology and capabilities becoming ever more widespread and accepted, it’s remarkable how well the contemporary surveillance state mirrors the telepathic dystopia in Butler’s story. Those of us who participated in the Twitter discussion seemed to share Butler’s self-described pessimistic outlook on humanity.

Short stories in summation, if you want to read intelligent science fiction infused with a heavy dose of social criticism, you can’t do any better than the marvelous Octavia Butler.

You can download Unexpected Stories from Amazon here. If you haven’t yet used your 30-day “Kindle Unlimited” free trial, then you can do so in order to read these two stories for free (like I did). They only take a couple of hours to read. The reminder of our conversation is archived under the  #UnexpectedStories hashtag on Twitter. If I didn’t manage to convince you that these two stories are worth reading, then perhaps this excellent review in the Los Angeles Review of Books will.

Finally, another huge thank you to Evelyn Alfred for introducing me to Octavia Butler and for facilitating the conversation.

P.S. I created a fancy new “Book Review Index” page where you can see a list of all of the books I’ve read in 2014, in order from best → worst.