I know that I feature quite a few “unconventional” children’s book illustrators on this blog, and believe me, that is intentional. But that doesn’t mean that the original fairy tales by Hans Christian Andersen, The Brothers Grimm, Charles Perrault, and even Lewis Carroll don’t deserve recognition. There is a reason, after all, why those (often quite gruesome) tales have persisted for centuries. If you are one for classic children’s stories (as even I am from time to time), then Austrian illustrator Lisbeth Zwerger’s interpretations, which seem to be plucked directly from a whimsical child’s imagination, will be sure to satisfy you.

Let’s start with Thumbeline, a classic story by Hans Christian Andersen that was later turned into the shoddily-animated film “Thumbelina” that I nevertheless loved as a kid. What can I say? I have always been short, so the tale of a girl the size of a thumb resonated with me. The original story is quite dark—Thumbeline is kidnapped and nearly forced into marriage not once, but twice, only to escape and nearly starve to death during the winter. Disturbing things about women as property, that. Nonetheless, Zwerger’s illustrations are soft and beautiful, and come very close to how I imagined the story. And, of course, Thumbeline’s friendships with select animals (only those that Andersen deemed attractive or harmless, mind you) are often quite sweet.

Although Oscar Wilde was best-known for his satirical portrayals of 19th-century England, he once published a collection of short stories for children that became well-known in its own right. Like most of the other stories written for children during that period, the stories in The Happy Prince and Other Tales are rather pendulous with regard to moral overtones. In “The Selfish Giant,” a tall, ornery man initially refuses to let the children in the village play in his beautiful garden. Zwerger’s soothing and soft-focus drawings bring out the story’s sweet undertones.

Considering the volume of stories by Hans Christian Andersen that Lisbeth Zwerger has illustrated, it’s fitting that she won the Andersen Medal in 1990 for her lasting contributions to children’s literature. As I’ve said before, the Andersen Medal is the highest honor of its type, and is often nicknamed the Nobel Prize for children’s literature. Beyond that, Zwerger has won just about every prize imaginable that relates to illustration. Perhaps for Christmas one year I’ll ask for this undoubtedly gorgeous, but rather expensive, compilation of her work.

When I was growing up, I thought the Sandman was an evil monster who gave children nightmares. For once Andersen’s characterization is the more lighthearted one:

The Sandman comes in the evening , when children are sitting at the table, or perhaps on their stools. He comes upstairs very quietly in his stocking feet, opens the door softly, and then he sprinkles the finest of sand into their eyes…The Sandman does them no harm, for he is kind to children…He wants them to be quiet so that he can tell them stories…No one in the world knows as many stories as the Sandman. Yes, indeed, he tells really wonderful stories!

At any rate, Zwerger’s illustrations are anything but frightening, even if the above passage does still seem to have (at least from my perspective) some potentially threatening undertones. Here, the Sandman helps a child climb into the story within a picture hanging on the wall.

And here the Sandman tells a story about “‘the other Sandman…my brother…called Death.” What a way to introduce children to the concept! Hans Christian Andersen was not much of one for subtlety. Luckily, Lisbeth Zwerger is, and her version of Death isn’t frightening at all, but rather a gallant gentleman atop a steed.

One of my favorite works of Zwerger’s, though, is Biblical in origin—and, some would say, the very first fairy tale. Despite the violent and vengeful take on Noah’s Ark released in the last year by Darren Aronofsky, I still remember the story as I first learned it in Sunday school: a calming one about animals, peace, kindness, and beginning anew. (For an excellent review of the film, by the way, head on over to Black is White). Luckily, Zwerger’s interpretation falls into the latter category.

You’ll have to indulge me a bit here; I couldn’t resist posting multiple images from this book (still only about 11% of the content by my calculations, in case you’re worried about Fair Use on my behalf)… 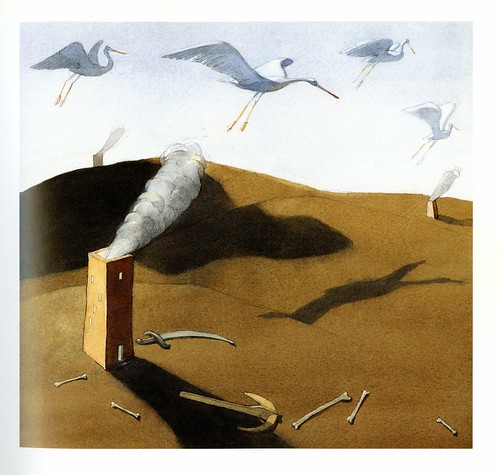 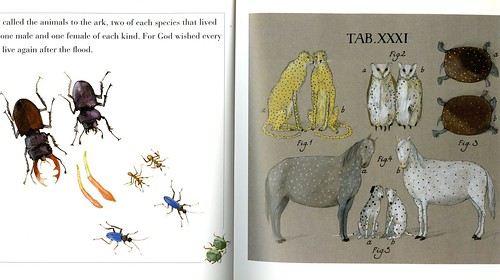 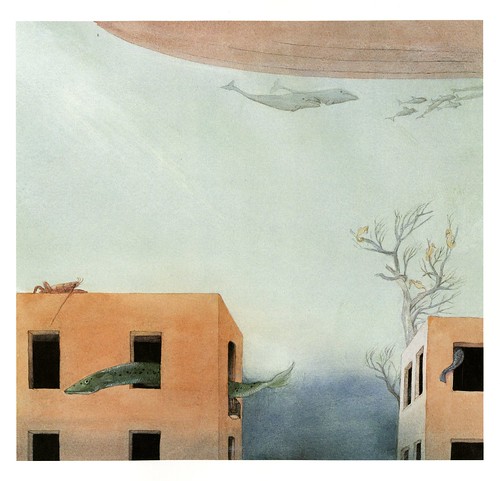 Coming back again to the traditionally accepted notion of fairy tale, Lizbeth Zwerger’s take on The Seven Ravens by the Brothers Grimm is nothing shy of perfection.

Like many of the stories by the Grimm Brothers, The Seven Ravens is undeniably dark, even terrifying. It involves a severed finger, after all. But at the end of the day it is about bravery, love, and familial loyalty.

When I was in Germany a couple of years ago, doing research at the International Youth Library, I was often struck by how closely Munich resembled the illustrations in so many of the books I’d read as a child. It was very exciting, if slightly eerie, to walk through the country in which many of the original fairy tales were dreamed up. I mean, for goodness sake, the International Youth Library is housed in Schloss Blutenberg, a castle complete with a moat and swans! Suffice it to say that the aesthetic in many children’s books, and especially of those by illustrators such as Zwerger, have much in common with the Western European landscape.

It was, for a time, if not realistic to expect to marry into royalty, then at least more of a possibility than it is today. After all, I saw something like half a dozen castles in the week-and-a-half that I spent in Bavaria. Often, though, those stories about nobility and royalty, such as The Swineherd by Hans Christian Andersen, involve a test of sincerity.

In these stories, princes are desirable only when outfitted in princely garb; princesses are considered eligible for marriage only when dressed in billowing skirts and fine jewelry. What, after all, is the point of Cinderella if not to say that one can only be attractive when equipped with the right resources? And so, there is the eternal test—can the nobleman or noblewoman recognize his or her betrothed when they are disguised as a peasant? Or is the attraction based on silk and crowns, instead of good intentions?

Last, but not least, are Zwerger’s gorgeous illustrations for Tchaikovsky’s classic ballet, Swan Lake. Zwerger never completely separates human from swan, such that Odette is perpetually perched on the brink of transformation.

I wish they would make an animated film, or create the set for the dance performance, using Zwerger’s dreamlike, watercolor aesthetic.

A few more of the illustrators that I’m planning to feature soon on this site: Isol from Argentina, Wolf Erlbruch from Germany, and Oliver Jeffers from Australia.  And there will also be a roundup of different illustrated editions of Alice in Wonderland coming soon as well (including Zwerger’s version). Cheers!