The library where I work has a huge South Africa exhibit up at the moment. It’s been almost 20 years to the day since Nelson Mandela was elected president of South Africa on April 27, 1994, and twenty years of democracy is a huge milestone for the young nation. Accompanying the exhibit is a complementary 6-week film series, and wouldn’t you know, but I’ve decided to participate in earnest! So, for the next five Thursdays, check back for reviews of the following films: A Dry White Season, Cry the Beloved Country, Red Dust, Tsotsi, and Invictus.

Last night’s film was, of course, the sci-fi flick District 9. 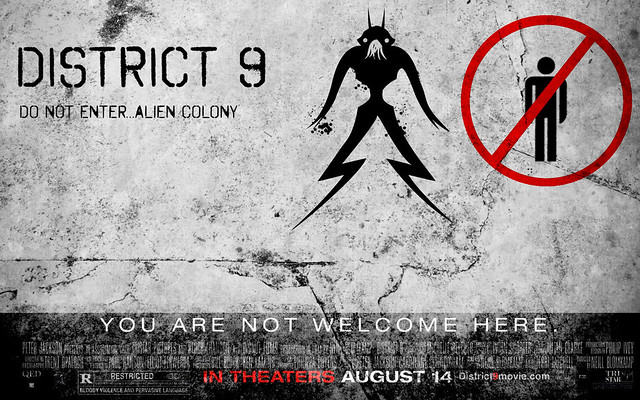 I’ve seen District 9 once before–something like 6 or 7 years ago. All I remembered was that it was very violent and gory. In the intervening years, I had the opportunity to spend two months in South Africa in 2011. Now, I’m not claiming that spending 8 weeks in a country makes me an expert by any stretch of the imagination, but it definitely did help me understand the film better.

The primary metaphor in District 9 is so obvious that it hardly even seems metaphorical. Aliens descend on Johannesburg, the largest city in South Africa, and are stranded because they lack sufficient fuel to power their spaceship. The humans are horrified by the part metal, part beetle creatures who feast on meat and live in a state of permanent squalor. A decision is made to let the aliens–derogatorily deemed “prawns”–set up a temporary camp in District 9 just outside of the city. Eventually, though, the locals decide that they’re tired of the aliens living next door, and the South African government hires a private military contractor, Multinational United (MNU), to forcibly relocate them to a new internment camp. That’s where the gormless and cowardly Wikus van de Merwe steps in. 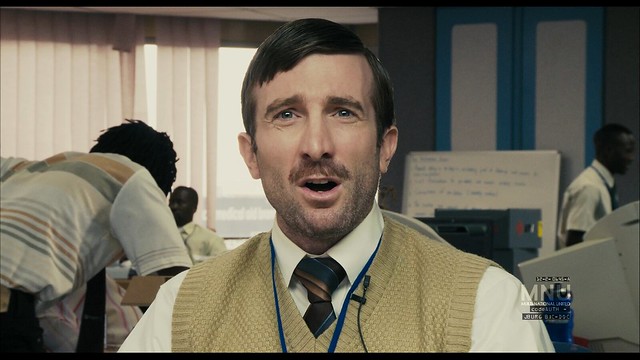 Hired into a swanky position because of who his wife’s father is (hello, racism-fueled nepotism), van de Merwe is assigned the monumental and predictably violent task of “legally” evicting the aliens from their homes in District 9. What this essentially means is: 1). Show up in a bulletproof vest flanked by two military contractors with machine guns; 2). force the aliens to sign a document stating they’ve been given a 24-hour evacuation notice (hint: they haven’t); and 3). threaten to abduct the alien’s children if they refuse to cooperate, smiling deceitfully the entire time. 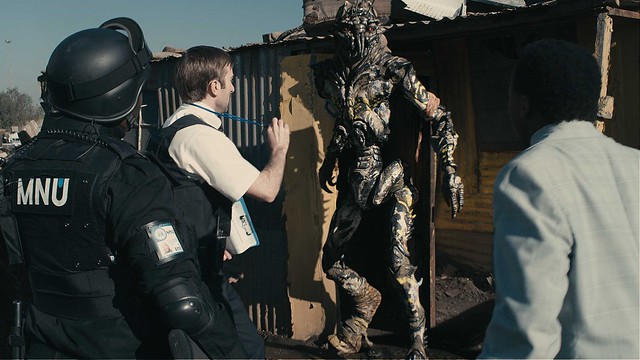 Of course, there’s lots of arbitrary shooting and ethically horrifying violence. The scene where van de Merwe pulls the plug on a series of incubating alien fetuses is particularly gruesome. The evacuation in District 9 was intended to mimic the series of events in District 6 in Cape Town in the 1970s. District 6 was a township (a.k.a. shantytown, a.k.a. informal settlement, a.k.a. imijondolo) in the heart of the city that occupied prime real estate. Predictably, the apartheid government decided that whites should have that land. They manufactured a series of excuses for vacating the district–gambling, drinking, violence, prostitution–and 60,000 mostly coloured residents were forcibly removed to the Cape Flats township a suitable distance away from the city. Does this sound familiar or what?

There are also a couple of notable allusions to Nazi Germany. At one point, van de Merwe admits that the new internment area for the aliens is essentially a “concentration camp,” and the horrifying biological/medical experiments that the scientists at Multinational United perform on the prawns are reminiscent of the Nazi human experiments unearthed during the Nuremberg trials.

“Alien” has long been used as a derogatory term to divide humans into upper and lower classes. Xenophobic Americans often describe undocumented Mexican immigrants as “illegal aliens,” thus suggesting that they are lower humans undeserving of citizenship, or worse–not humans at all. So with that in mind, why not make a science fiction film with, literally, aliens as a stand-in for all discriminated peoples? The aliens in District 9 are clearly supposed to be coloured and black South Africans, whom the apartheid government treated like second- and third-class citizens. Carrying the metaphor further is their supposedly disgusting appearance and reliance on raw meat for sustenance, which leads to further discrimination based on appearance and cultural practices. And of course, the irony is that the aliens in District 9 are brilliantly technologically minded, with advanced biological weaponry that humans can only marvel at.

I’m sorry to say, though, that the shantytown District 9 bears an uncanny resemblance to many townships that I saw when I was in the country. Let us remember that dirt, disease, and lack of facilities are symptoms of poverty, and not inherent qualities of the poor. I can’t tell you how often I still see iterations of that awful, outdated argument, where poor people are blamed for their own poverty because of their supposed lack of morals. 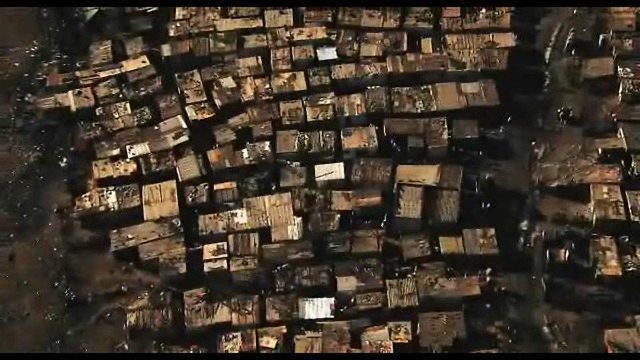 Here’s a screenshot from District 9… 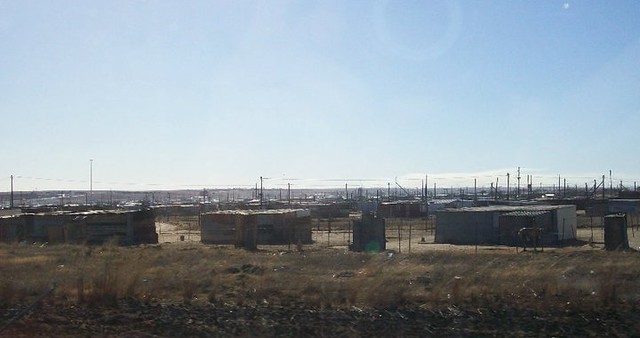 And here’s one I took through the window of a bus while passing through the outskirts of Johannesburg.

Let’s look at that again. District 9… 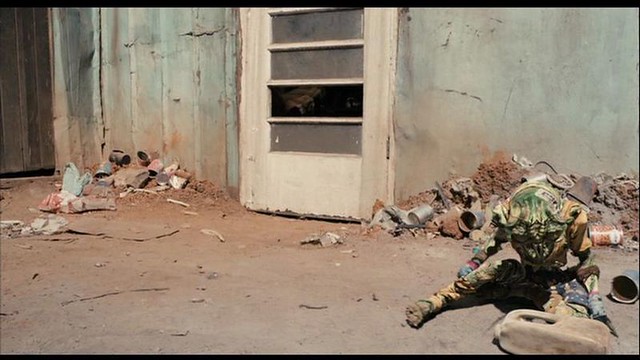 And a picture I took in Soweto in 2011. (This was where the movie was filmed, incidentally). 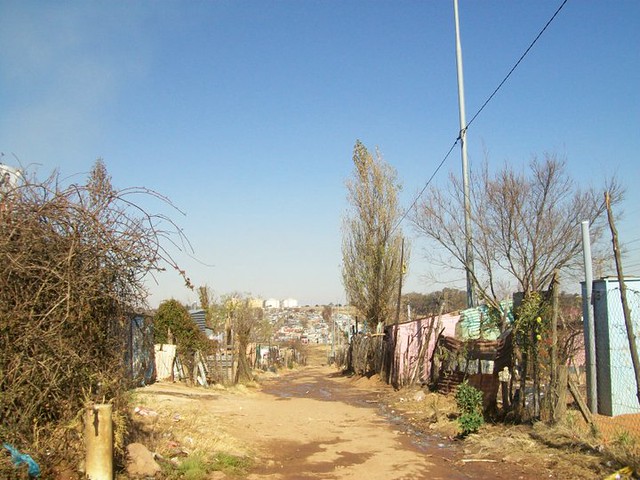 I’m not trying to shame the country or anything like that (heck, my examples of the faulty thinking surrounding poverty were pulled from the U.S.), but it’s important to remember that while one huge battle was won in 1994, the struggle still continues. And not just in South Africa, either–it’s a question of humane treatment of humans all across the globe. As one film reviewer put it succinctly, “Substitute ‘black,’ ‘Asian,’ ‘Mexican,’ ‘illegal,’ ‘Jew,’ or any number of different labels for the word ‘prawn’ in this film and you will hear the hidden truth behind the dialogue” (Chris Mikesell of Ka Leo).

On top of all the well-executed, thinly veiled social criticism, District 9 is a solidly produced, well-acted, and exciting film. The fact that it grossed over $200 million on a $30 million budget is a victory all its own.  I think it’s difficult even for someone with zero knowledge of South African history not to grasp that something important is happening, that the very viability of human decency is at stake. All in all, it’s an even better film than I remembered, and its creativity and social importance make it a contemporary sci-fi classic, if there can even be such a thing. Who would have guessed that aliens and townships were such a compelling combination?