Yes, the incredibly popular TV show is back… 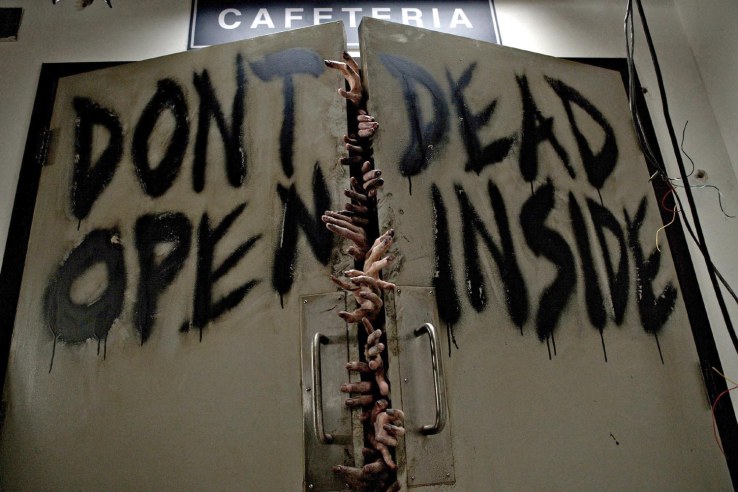 And while there are probably quite a few people who’ve watched every episode of the show AND read compendiums 1 & 2 of the comic, there don’t seem to be that many people writing about both of them. Which I guess isn’t that unusual, since each compendium is over 1,000 pages long, and devotees of the comic may be unwilling to watch the watered-down TV version.

I’m the first to admit that the TV show is terrifying. Well, maybe not so much anymore…although the mid-season finale, when the prison was finally overrun, injected some much-needed liveliness back into the show. But. The show started off as terrifying. It sort of reminded me of Dexter, in a way, because the idea behind the series was just so shocking. That first episode, along with the season 2 opener when the group is stranded on the highway and the herd of zombies comes through, is still my favorite. 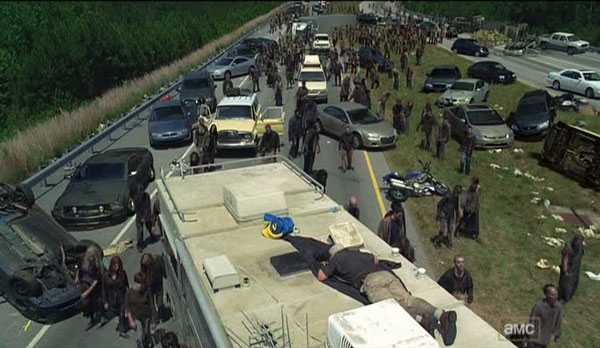 The main point of the graphic novel–and I’m not making any sort of clever argument about this since it’s explicitly stated numerous times throughout the book–is that the term “walkers” doesn’t apply to the zombies. Rather, it is the living people who are the “walking dead.” This is illustrated cleverly on the covers of both compendium 1 and 2. Heroes on the top, zombies on the bottom, with only a narrow slice of darkness between them.

In the TV show, threats are more ambiguous, and hope rules the day. Yes, the living people are dangerous (hello, Governor), but the zombies are still very, very much a threat.

Remember all the fuss about the fences coming down? In the graphic novel, Rick and his group of, well, essentially assassins, would have had no trouble dispensing of 50 zombies between them. The real threat, as Rick succinctly says, is people.

Which brings me to a couple of the key differences between the comic & the TV show. The comic is in black & white. But don’t think that means it’s not scary. If anything, the complete lack of color re-emphasizes how bleak the world is. I realize it wouldn’t have been realistic to film the TV show in b&w; it simply wouldn’t have done as well. But bloody makeup and special effects aside, the zombies in the graphic novel are often more terrifying even though they’re not “3D.”

This page from compendium 2 should give you a sense of the overall aesthetic. It’s grim, void of mercy or hope. The pacing of the graphic novel is also much, much faster than the TV show. Sometimes a couple of pages contain enough material for an entire episode. Granted, sometimes stretching out a scene makes things more tense. But in the graphic novel all bets are off. No one is safe. People are not kept around because they’re likable…they have to earn their right to live by becoming very effective survivors–a.k.a., killers.

I won’t go into the plot differences between the TV show and the book as they are too numerous to discuss. And really, most of the plot changes I completely agree with. You might have heard that the televised version of The Governor is tame compared to the comic counterpart, and it’s true. But the decision to cast a middle-aged man, sort of a Southern gentleman gone bad, was an interesting one.

But what about that key metric that is always used to judge film adaptations? I.e., faithfulness. Is the TV series faithful to the graphic novel? 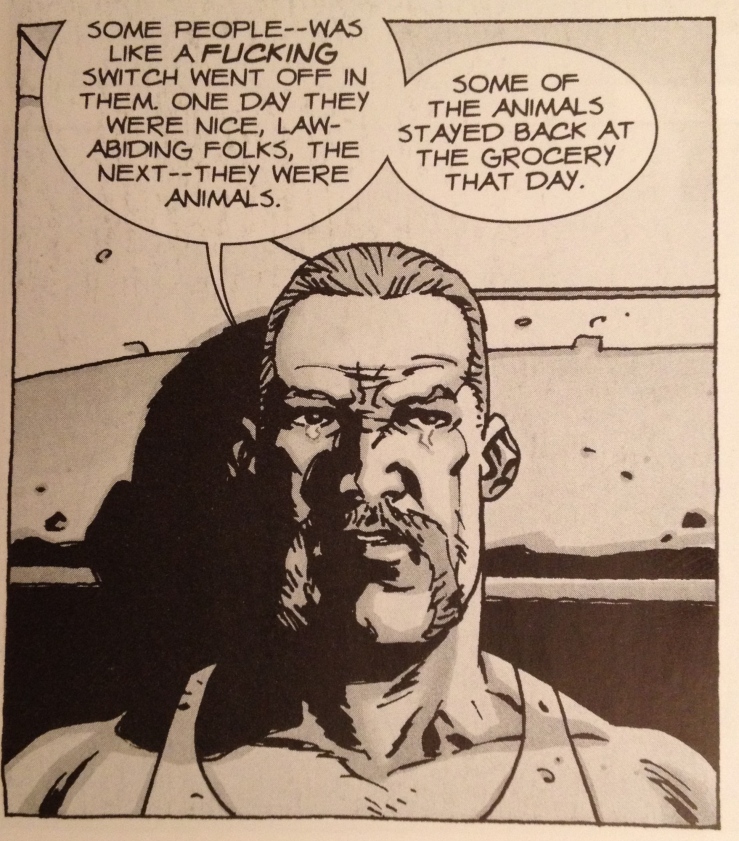 Well…yes and no. The above quote is pretty much the thesis of the graphic novel: once society collapsed, many people simply lost their humanity. The real tragedy wasn’t zombies; it was how people abandoned all pretense of goodness, reverted to their baser instincts, and came unhinged.

Is this “unhinging” depicted in the show? To some extent. You see that characters are driven crazy by their surroundings and by grief. But that thin slice of madness–the suggestion that anyone, at any time, could completely lose it–well, I’m not sure the show is as convincing in that regard.

There are also no answers in the graphic novel. The whole Centers for Disease Control and Prevention plot in season one of the show? Doesn’t exist in the comic. The concept of “trust” no longer exists. There’s an intense sense of claustrophobia, almost like you’re watching that horrible reality television show “Big Brother.” It’s a study of the human psyche–how far can people be pushed before they lose it?

The harrowing telephone call sequence is the closest in feel that the TV show ever got to the graphic novel. Is Rick going crazy? Who is he talking to? Is this a nightmare from which he will wake up?

The answer–in the comic–is ultimately, no. You don’t get to wake up. There’s always another horror lurking on the next page. So while the show is bloody and gory and full of machetes and crossbows, it only captures a fraction of the hopelessness that is the graphic novel.