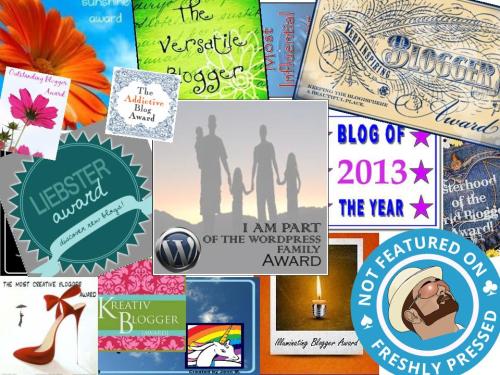 I remember when I first started noticing award buttons on blogs. Sprinkled down the right side of the page, proclaiming everything from Sunshine to Versatility to Beauty. Huh, I wondered. A Liebster Award? What does that entail? And more importantly, how can I get one?

It wasn’t too long after I started blogging regularly that I started getting nominated for things. I’m not saying that to brag; I think it’s just an integral part of blogging on WordPress. Do it long enough, be engaged enough, read a large enough pool of other blogs, and sooner or later, you’ll have accrued several “Congratulations!” comments on your About page.

As you can imagine, I was really excited the first time I was nominated for an award. I spent hours (literally) devising clever answers and coming up with the list of blogs that I, in turn, would honor with a nomination.

But then I paused.

Instead of publishing the post, I let it languish in draft state over the weekend. Come Monday, I had decided not to post it.

At their best, Blog Awards are a community-driven form of recognition. They’re low-impact, entertaining, and help you to get to know your blogger a bit better. It’s a way for bloggers to share links to other blogs they admire, a way to build cohesion and a mini-community within the mind-boggling 75 MILLION WordPress sites in the world. I also genuinely enjoy reading them; they’re sort of like virtual icebreakers, and the questions that people come up with are often quirky and clever.

On the other hand, blog awards are, in an almost ironic way, the opposite of inclusive. Like I said, I always read blog award posts because they’re light & easy. But the whole time, I’m thinking nervously to myself, Will MY blog be included on the list? Have I gotten tagged this time, or did I get passed over in favor of someone more popular/eloquent/entertaining?

Perhaps that’s part of the reason why the term “award” confuses me. After all, they’re not really awards in the traditional sense, are they? And by “award,” I’ll defer to the Oxford Dictionary’s definition: “a prize or other mark of recognition given in honor of an achievement.” But if any blogger can “win” an award (and very, very easily, I might add), then I think that’s a diminishment of the original term. Instead, I see them as occupying a space somewhere in between field-day ribbons, those strange MySpace chain letters from years ago, and the factually suspicious articles my dear, confused aunt is always posting on Facebook.

Let me be clear: I’m not advocating the abolishment of blog awards. Heck, I’m going to continue to read them the same way I’m going to keeping looking at the weekly “What were they thinking?!” photo gallery over on Yahoo celebrity, because dammit, it’s FUN.

But maybe, instead of calling them “awards,” we should admit what they really are: A spotlight of sorts, an impermanent Blogroll where suggestions and pathways to other parts of WordPress are fleetingly posted and quickly forgotten.  I also think that for people who aren’t on WordPress, blog awards can be not only confusing, but alienating. A lot of my readership comes from Facebook, because people who I’ve known for years have come to respect my opinions, and I wouldn’t want to thrust something that seems like an inside joke in their face in return.

If the point of blog awards is to humanize bloggers by prompting them to share little-known facts about themselves, then I question the validity of that, too. After all, isn’t that the point of regular posts? I would hope that by sharing my interpretations of books and movies and by reflecting on the difficulties and joys in my life, that those who read my blog are able to get a sense of who I am. I always feel deeply rewarded, for example, when I read a work of fiction like The Inheritance of Loss or Cloud Atlas and think afterwards that I managed to get a sense of the author’s personal psychology.

But, if you’d like to know more about me, some pure, cold, hard facts, then consider the following:

Every day I wake up reluctantly and usually hit the snooze button a minimum of three times. I despise being late but I am always late to everything. My heart bursts whenever I think of my little sister, of whom I am so proud and protective, and I have a latent sense of guilt that I went to college so far away and left her alone to slog through high school. I think the worst feeling is the sense that your dignity has been (temporarily) removed. I unconsciously count steps when I’m climbing stairs, but it’s been 4 1/2 years since I took a math class and I can’t remember how to calculate slope. I’ve lived through 21 summers and 25 winters. Sometimes I think about all the crazy people who were in high school with me and it scares me to think that now they can vote and drive cars and buy houses and make big decisions. And sometimes I worry that I was a little too influenced by The Fountainhead.

Now, the verdict: Was that paragraph interesting to read? Perhaps. But I’d like to think that you could learn more about me from reading about how much I hated The Wolf of Wall Street and how much I loved The Brief Wondrous Life of Oscar Wao. Saying “I am, I am, I am” is a very direct and superficial way of introducing yourself, and I find that the most interesting people, and books, and movies, and yes–BLOGGERS–reveal themselves little by little.

So go ahead. Keep writing, bloggers. Because I’ll be getting to know you through every single sentence you share.