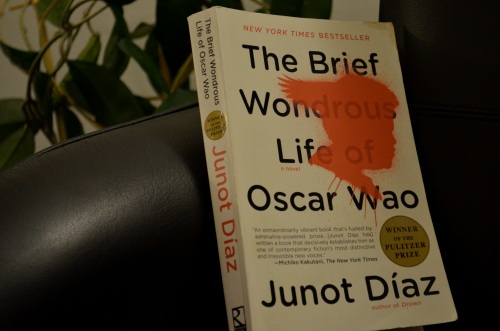 Dios mío, but this is a fabulous book.

The Brief Wondrous Life of Oscar Wao is a multi-generational story about a cursed Dominican family. Haunted by fukú (“fuck you”), a nebulous malediction that tends to rear its head in the bloom of adolescence, Oscar, his sister Lola, their mother Hypatía Belicia Cabral (“Beli”), their great-aunt La Inca, and their grandfather Abelard Luis Cabral, are all driven miserable in love despite the later generations’ attempts to extinguish their ties to Santo Domingo.

This book was not what I expected.

It’s brilliant. It deserves every bit of praised lobbed its way, with academics stumbling over themselves to congratulate Junot Díaz on his debut novel. At times, it’s mirage-like, with tasty bits of magical realism leaping up from the page; other times, it’s direct and disgusting, a mini history lesson on the horrors of the Trujillo dictatorship that strangled the Dominican Republic for over 30 years. Part of me wishes I’d read it earlier, but you know what? I’m not sure I could have handled it. It was definitely beyond my capacity in high school, and it was probably too complex for freshman-year-of-college Alina, too.

The writing style is unlike any I’ve ever seen. It’s a gorgeous post-modern pastiche, chunks of ideas weaved together to form subliminal, unforgettable sentences. It’s a novel of today, a novel that’s exciting and explosive and written almost tumblr-style with multitudes of footnotes, legions of fantasy and sci-fi allusions, a contemporary Dominican Lord of the Rings, if you will, minus the dry middle-Earth prose.

But the story, shall we?

Oscar Wao, real name Oscar de León, his nickname a bastardization of “Oscar Wilde” whose strange 19th-century affectations he presumably shared, is the subject of the novel. Seemingly cursed from birth, Oscar’s girth explodes into something beyond cute childhood chubbiness around age 7. This overweight, combined with his nascent nerdi-ness, brands him an untouchable for the rest of his life.

Chief among Díaz’s accomplishments is his unforgiving exploration of the importance of sexuality in Dominican identity. The best women are bellezas, beauties; the best men, bachateros (playboys). Oscar’s swollen appearance, his lack of social capital, his persistent virginity, are all enormous sources of embarrassment not only to himself, but to his extended family and the whole of the Dominican-American community. He wallows in shame for the better part of the novel, but is nevertheless kind, gentle, and exceedingly well-spoken, his brief utterances shattering the deliberately casual tone of the rest of the novel, causing the reader to not only laugh out loud but to pity the poor fool who responds to the query “How are you?” by stating: I’m copacetic.

Oscar’s not the only one who fails in terms of sexuality. Though gorgeous, his older sister Lola is perpetually shamed by her well-endowed mother for not having a large enough chest:

You dread conversations with your mother. Those one-sided dressing-downs…Your mom’s convinced that if you eat more plátanos you will suddenly acquire her same extraordinary train-wrecking secondary sex characteristics…But for all your similarities, the tides of inheritance have yet to reach your chest. You have only the slightest hint of breast; from most angles you’re flat as a board and you’re thinking she’s going to order you to stop wearing bras again because they’re suffocating your potential breasts, discouraging them from popping out of you. (52)

As revenge, Lola chops off her long, luxurious hair, a surefire sexual transgression that further enrages her mother. In so doing, Lola attempts to reject the obsessiveness with which her culture classifies women and men, ranking each by hotness in circular, unforgiving cycles. It’s also a good reminder of just how powerful looks are, how great beauty can be a pathway out of poverty if you use it right, a genetic ticket propelling you to the top of the food chain.

Why, then, in dual countries equally obsessed with appearance, would a tale about a less-than-ordinary, obese dweeb be worthy of recounting?

We meet our narrator in chapter four.  A Dominican man with all the classic signs of success (handsome, gets tons of girls), Yunior is in love with Lola, and in a weird sort of extension, kind of in love with Oscar, too. Or at the very least, he becomes obsessed and saddened by the curse put upon the de León family, the relentless fukú placed on them by no less than the supernaturally evil, Sauron-like dictator Trujillo.

Perhaps because Oscar’s life was so unexceptional, so unfulfilled, Yunior feels compelled to share Oscar’s story lest it pass into history undocumented. It’s a tragic story; you should know that much from the title. You keep waiting for the poor slob to die, wondering when and how it’s going to happen, and whether it will be a deserving death or an ordinary one, quickly snuffed out by something as innocuous as a train, plane, or automobile. And you come to realize that the “wondrous” in the title is simultaneously ironic and sincere, that Oscar was a wonderful person even if his personhood was never fully realized. It’s the curse, the fukú, that eventually drives him to make the bravest decision in his short life, a decision that ends him.

Unlike many English/Spanish mixed-language books, Oscar Wao isn’t accompanied by a glossary. Suck it up, Díaz seems to say; either get with the motherfucking program and learn a few phrases in Spanish or accept that you’re just gonna lose half the meaning of some paragraphs. So, future readers, be warned: pull up SpanishDict on your smart phone, cuz the slang and profanity ain’t gonna be in the lily-white “dictionary” you got in Spanish class in high school. No way, hijo de puta. Don’t be a parigüaya. Look up that shit.

That last paragraph, if you were wondering, is pretty close in style to the way the book is written. It’s an explosive ride, alternately laced with profanity and an overly-collegiate vocabulary, that pulls you in like a vortex and spits you out at the end, wondering what the heck was that fantastic thing you just read. A tragicomedy in three Acts, a coming-of-age-in-America tale with roots in the Dominican Republic, a glorification and condemnation of beauty and sexuality, a tirelessly nuanced historical account of the atrocities under the DR’s homegrown Hitler, a magical, gleaming, and heartbreaking story about one huge nerd with a huge heart and a huge appetite: the book–nay, the spell–is all this and more, a feat of imagination that has everyone who’s read it grabbing at their heartstrings, for better or worse.

I’m keeping track of all the books I read in 2014 on this post. Oscar Wao is book #7  on the list, though I’m going slightly out of order. Photo credit: G.

21 thoughts on “The Brief Wondrous Life of Oscar Wao, or, the best book I’ve read in a long, long time”