With minimalism a trend nowadays in everything from blog designs to photography to clothing, it’s no surprise that I found the work of Spanish illustrator Javier Zabala to be enchanting because of its apparent simplicity. His work feels uncluttered, as though he only includes what he must in order to illustrate the story at hand. I think that in the field of children’s literature illustration, people often mistake full  drawings for good drawings. In a genre filled with work by the likes of Mary Engelbreit (who is very talented, but whose drawings are undoubtedly over the top), the almost overly-tactile illustrations of Maurice Sendak, and the cartoonish and colorful drawings of Eric Carle, Zabala’s work comes as a welcome change.

In this example from the book Árboles , the text matches the illustration, which reads: “There are trees that have only branches and leaves.” The text was written by Mario Benedetti, and Zabala wisely chooses not to exaggerate Benedetti’s simple words. Rather, he demonstrates with this soft yet clean image that simple can mean beautiful. The trees from Santiago are also slender and soft, as is the watchful wolf and gently glowing orange-red sun.

Javier Zabala attended the Oviedo Art School in Spain, but only after abandoning his initial plan to study veterinary medicine. Many would consider this a risky move, but for Zabala, it was the right decision. He has since illustrated over 70 books, which have been translated into 15 different languages. His style is distinctly and particularly Spanish, which you can see in his depiction of the most Spanish of gentlemen, Don Quijote:

Thin lines and soft watercolors combine to give Zabala’s drawings a pleasing and unfussy effect; there are no extraneous details to distract from the mood or the story. In Un drago troppo solo, a tale in which a young boy befriends a lonely dragon, the tone of their friendship is characterized by the dreamy trees and velvety gray ground of the world they occupy.

One of my favorite books of Zabala’s is Por qué nos preguntamos cosas (“Why we wonder things”), which recounts how different sets of animals interact in strange ways. In this example, three naughty cats appear to tease a confused dog. I’ve done a rough translation of the text so that you can see how the sweet humor in the poem is extended through Zabala’s simple, playful drawings. The last line was difficult to translate, as it conveyed  a particular sentiment of timelessness that was hard to capture in a more direct translation. Hopefully my interpretation is faithful to the original meaning.

Why dogs don’t know how to count to 10

Some dogs do know things, but they don’t say anything. They count softly: One, two, three, four, five, six, seven, eight, nine, and ten. When they get close to ten, they start over again. Some dogs wonder what comes after the number 10 and they sniff the ground trying to find another number. Other dogs only use their noses to find food and others are satisfied with the first 10 numbers. I had a dog. He didn’t know how to count. Instead he would wait for me by the door even before I arrived. It didn’t matter if I was late; he would always be there.  Even after he had already counted to 10.

Last, but not least, I thought I would include one of  Zabala’s illustrations of the Shakespeare play Hamlet. Like many other students, I was forced to read Shakespeare in high school, and while I wasn’t exactly enamored of the play, I was forced to watch that terrible movie with Kate Winslet and Kenneth Branagh that made the whole thing seem awful. Yet I can still vividly recall the dark descriptions of Denmark and a pervasive sense of melancholy, and Zabala’s drawings capture perhaps too well the psychological torment that Hamlet and Ophelia must have experienced in a cold and largely sunless world. 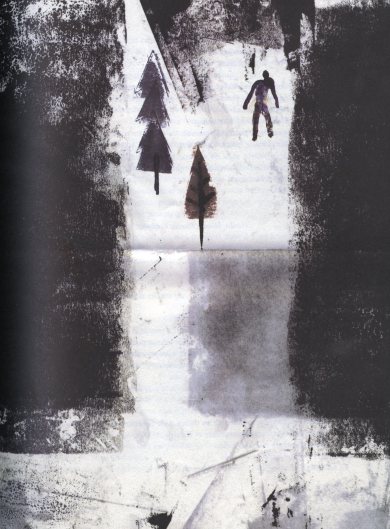 And that is all for Javier Zabala. For more information (and more illustrations), you can visit his website at http://www.javierzabala.com/index.php. Check back next Wednesday for a post on Belgian illustrator Carll Cneut.

This is part of a series I’m doing on illustrators from around the world who were nominated for the 2014 Hans Christian Andersen Award, among the most prestigious distinctions in the field of children’s literature. Those whose work I have already discussed are Russian illustrator Igor Oleynikov and Italian illustrator Fabian Negrin.

3 thoughts on “The Diminutive Drawings of Javier Zabala”